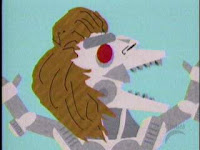 Who can save you now, puny humans? The GOP's mad scientists have been working around the clock to augment their vice presidential nominee for Thursday's epic battle with the Democrats' Joe Biden. Thanks to the tireless investigative reporting of Don Asmussen, the inimitable “Bad Reporter” for the San Francisco Chronicle, we now know what La Palin has been doing during her days of sequestration and anti-media quarantine.

The winsome and winning governor of Alaska is undergoing a shocking transformation into a Borgian assemblage of talking points, rhetorical gambits, and factoids. What chance does Joe Biden have against such an amped-up debate machine? The senator from Delaware is widely reported (by most accounts) to be merely a human being. Is his heart pure enough to give him the strength of ten men, and therefore a tiny fighting chance against being utterly consumed by Mecha-Palin? The fate of the Free World hangs in the balance!

For all sorts of reasons (I'm non-USAian; we have our own debate to watch up here; I'm going off with DW for a romantic weekend tomorrow AM) I am unlikely to watch the VP debate. But I look forward to hearing of yet another episode of Palinesque glossalalia, as extracted by the blogosphere. I mean, if she can't stand up to a simple interview, how the hell does she expect to keep from babbling inanely when faced with a hostile opponent?

Thanks, William. I was having a Palin moment!