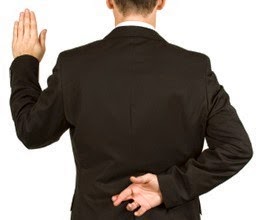 In the Roman Catholic numbering of the Decalogue, No. 8 is the commandant that forbids lying: Thou shalt not bear false witness. However, this unambiguous rule can apparently be overcome by the higher law of “the means justify the ends.” Catholic Vote has sent me a questionnaire that amply demonstrates its zealotry in doing God's work is not impeded by minor considerations like honesty. First of all, the survey's outcome is foreordained: “[T]he purpose of this survey is to send a strong and clear message to every politician running for election or re-election in the 2014 mid-term Congressional Elections, that the overwhelming majority of Catholic voters demand ObamaCare be repealed.” (By contrast with the predestined conclusion, the superfluous comma is merely a venial sin.)

It has been frequently observed—often with gnashing of teeth—that American Catholics differ little from their Protestant brethren when it comes to attitudes relating to abortion and contraception. The laity is scarcely ready to enlist in an anti-abortion jihad at the behest of the clergy. Nevertheless, Catholic Vote is willing to make it look like they are. The survey questionnaire is replete with leading and misleading questions. For example,


ObamaCare regulations now require all Americans—including Catholic and pro-life Americans—to purchase health care insurance plans that include abortion-inducing drugs. In other words, under ObamaCare, pro-life Catholics are required to pay for abortions in violation of Catholic doctrine and moral teachings.

This statement insists on construing as abortifacients many contraceptives that physicians deny induce abortions, but doctors avoid speaking in absolutes, so Catholic Vote seizes upon the loophole to declare, “Aha! They do cause abortions!” (Not that most Catholics agree or even care.)

Other statements are even less defensible. One question seeks to inspire outrage over the president's proclivity for baby-murder:

An outright lie. It is not legal in Illinois to deny care to a survivor of a mishandled late-term abortion. There was an attempt when Obama was a state senator to enact legislation to amend and strengthen the pertinent provisions of law. Although initially inclined to support the measures, Obama ended up opposing them when concerns were raised that anti-abortion activists were waiting for the opportunity to use the enhanced language to accuse doctors of infanticide when inadvertent live births did not survive. Obama did not vote to deny care to inadvertent survivors because that remained illegal under Illinois law. Despite the legislative record, political opponents have not hesitated to accuse the president of aiding and abetting infanticide (which rather makes the point that motivated his vote in opposition).

Catholic Vote and Priests for Life are two anti-abortion organizations that work the same turf. Priests for Life mailed out a similar questionnaire during the summer. The surveys had several questions in common and all were devised to produce a desired outcome, no less mendacious than any other politically motivated campaign document. Catholic Vote gives its respondents the opportunity to check off such answers as these:

The “crushing cost”? Catholic Vote declares that health care insurance costs for “the typical American family” has risen by $3,000 per year. Where did they get this number despite Congressional Budget Office reports that ObamaCare costs are falling below original projections? The likely source is a Kaiser report on premium increases from 2008 to 2012 (a period during which the Affordable Care Act was only starting to get off the ground and the soaring health care costs that motivated it were still in full swing). The latest version of the Kaiser report notes that premium increases had moderated significantly in recent years, falling below the double-digit increases that had been typical in the past. Catholic Vote either hasn't caught up with the latest news or prefers to pretend it doesn't exist.