What's "Christian" about it?

The Church as thug

Nothing epitomizes right-wing Catholicism like the media ministry of Church Militant. Its principals (like the amazing Michael Voris) diligently churn out their rigorously medieval perspectives on current events as they fight the evil heresy of modernism. An excellent example of Church Militant's approach to Christianity was poured out on June 30, 2016, in a 40-second clip that fairly brims with vitriol.


In case you have any difficulty with the video, here is a word-for-word transcript:


A 30-year-old Utah man has become the country's first transgender Senate nominee from a major party. Referred to as "Misty Snow," the Mormon from Salt Lake is challenging Sen. Mike Lee for the U.S. Senate seat as the nominee of the Democrat Party. As self-described "conservative" Democrat currently working as a marriage therapist, Snow began acting as a woman in 2014, and believes his identity as a transgender will assist him in the upcoming election. Similarly, another man, thinking he's a woman and also named "Misty," clinched the Democratic nomination for Congress in Colorado Tuesday.

Several items stand out. First of all, spokesperson Christine Niles lays it on with a trowel as she refuses to use the gendered pronouns appropriate to Snow, who is deemed to be merely “acting” as a woman. Also, as a true disciple of the Prince of Peace, Niles makes a point of referring to the Democratic Party as the “Democrat Party,” using a ploy made famous decades ago by Sen. Joseph McCarthy. Finally, note how she closes her report, referring to the successful transgender candidate in Colorado as “another man.”

I suppose it's fortunate that the people of Church Militant fancy themselves a beleaguered remnant, standing together bravely for their one-dimensional version of Christ while the forces of Satan assail them from all sides. For one thing, their unremitting nastiness is scarcely likely to swell their ranks. For another, this way they can glory in their martyrdom of being ignored as insignificant.
Posted by Zeno at 4:00 PM 1 comment:

The California primary election is traditionally too late to make a significant difference in the outcome of presidential nomination contests. This year turned out to be yet another damp squib—except this time conspiracy theories have bloomed as never before. In the imaginations of Sen. Sanders' most enthusiastic supporters, dark powers have stolen their hero's “landslide victory.” A Bernie landslide in California? This is a startling conclusion to anyone who watched the election night returns. Clinton declared victory that evening and her edge of half a million votes was a compelling basis for her statement.

This is the point at which pearl-clutching hyperventilation took over. Facebook posts breathlessly insisted that two-thirds of the Sanders vote had been suppressed. Furthermore, a lawsuit had found two and a half million uncounted votes. This amazing discovery had apparently been made by cleverly looking at information posted on the California Secretary of State's public website—the same data the Secretary of State's office has been routinely posting since the year they acquired a website. Unprocessed votes are tracked on the Elections page labeled with Unprocessed ballots status, which is updated at the end of each business day. That's a pretty good level of transparency, which is old news for those of us who have observed several elections in a row, but shocking and head-exploding information for certain members of the Bernie brigade, who cannot come to terms with their candidate's loss.

With fifty-eight counties working individually through provisional and late mail-in ballots, the tallying process in California is reliably slow and tedious. They have thirty days to deliver their final counts to the Secretary of State, whose office posts partial returns as they come in. Quite naturally, therefore, questions have been raised over the practice of declaring a winner on election night. The Secretary of State doesn't ever do this. It's the news media. Well, what do you expect from them? They want a story and they're impatient to get one. In addition, the final vote tally never changes the election night results.

Never? Well, hardly ever. Clinton's election night lead of 472,000 votes made news networks confident about announcing that she had carried California, even if the uncounted votes could theoretically overturn the results. Sanders had been getting approximately 43% of the votes in the Democratic primary. He would need as much as 65% of the uncounted Democratic primary votes to overtake Clinton. The probability of that? Extremely close to zero. First of all, the 2.5 million uncounted ballots were statewide, comprising voters who participated in the Democratic primary, those who participated in the Republican primary, and those who participated in neither. Perhaps as many as 1.5 million were pertinent to the Clinton/Sanders contest. If Sanders got 1.0 million of those and Clinton got 0.5 million, the senator from Vermont would overtake the former senator from New York. Some handicappers think Clinton's margin will shrink from approximately 13 percentage points over Sanders to perhaps something as low as the high single digits, but no one is laying odds that the results of the Democratic primary will actually flip. Well, except for some of Sanders' die-hard supporters, who cannot let go of the impossible dream.

I mentioned that final tallies hardly ever reverse election results. There is one notable case from 2010. It was the race for state attorney general and was “too close to call” on election night. Nevertheless, the Republican nominee seized on his election night lead to declare victory and celebrate the results. The Democrat held her fire and cautioned her supporters to be patient. As the counting progressed, she overtook the Republican and the final count was in her favor, making Kamala Harris the new attorney general of California. I wrote a blog post on this contest before the definitive count was published, successfully predicting her victory based on the county trends. There's nothing similar about the Clinton/Sanders contest to suggest there could be a similar reversal. That race is over except for tweaks in the totals.

Postscript: This year Harris is on the ballot to become Barbara Boxer's successor in the U.S. Senate. 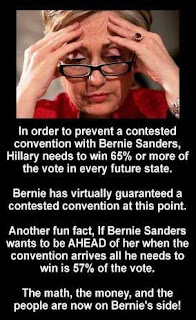