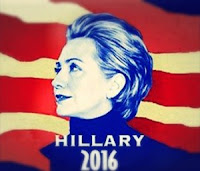 Dr. Google has a remedy

Although we now have more news sources than ever, we don't seem to be getting more information. In their eagerness to contribute to the news glut, media outlets generate increasing amounts of fluffy bits of non-news. It's extremely disappointing to find National Public Radio getting in on the act. On October 15, 2015, NPR's “lead digital reporter” Jessica Taylor posted a shallow item titled New Clinton Spanish Posters: Hillary or Evita? Although Taylor took the trouble to learn that Clinton's staffers disclaimed responsibility for the Spanish-language posters and images appearing in Texas, she used the rest of her short article to muse about resemblances to icons of Eva Peron, Madonna (as Eva Peron), fashion designer Carolina Herrera, and Shepard Fairey's 2008 Hope poster. The mystery of the poster's origin remained unsolved.

Perhaps it was too much trouble to do the minimal amount of research required to uncover something about the poster's origins. The earliest example I found with a quick Google search was in December 2012, when a site called “The Right Perspective” (not exactly friends of Hillary) ran a very similar image (only the background differs) with an article about Clinton's expected presidential campaign. Essentially the same illustration appeared in May of last year on the “Bearing Arms (Guns & Patriots)” site with an opinion piece mocking Clinton's position on gun control. 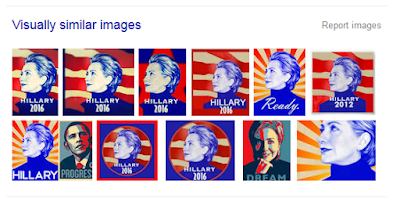 Who cobbled together the original image? Who switched the background of wavy red and white stripes to a burst of sun rays? These deep questions remain unanswered. The pictures have, of course, spread throughout the Internet, as memes are wont to do. Zazzle has it on posters and other paraphernalia. Politico reports that a copy was posted in Clinton's Brooklyn campaign office, although that falls a bit short of establishing it as officially sanctioned by the campaign, especially given its non-campaign antecedents.

Yes, it's a tiny little non-story. And it's something a “lead” reporter for NPR wastes time on—and not very well.