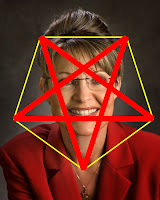 She's a heretic, too!

My first reaction to Sarah Palin's professed views on abortion was, “My, how Catholic!” She thinks life begins at conception and that abortion should be illegal in all circumstances unless it's necessary to save the life of the mother. That's remarkably close to the Catholic position, although Rome's loophole requires that the death of the fetus be an accidental concomitant of the medical intervention, as detailed in the Catholic Encyclopedia:

However, if medical treatment or surgical operation, necessary to save a mother's life, is applied to her organism (though the child's death would, or at least might, follow as a regretted but unavoidable consequence), it should not be maintained that the fetal life is thereby directly attacked.

I haven't heard Palin express her position in such a Jesuitically nuanced way, but she and Catholicism are nearly on the same page.

Is it because she used to be Catholic?

No one has made much of a fuss about Gov. Palin's abandoned Catholicism, but she did actually start life as a baptized Roman Catholic. At age 12, however, she joined the Wasilla Assembly of God church and was baptized again, this time by full immersion in Alaska's Beaver Lake.

Did the second baptism wash away her Catholicism? Some Catholics don't think so.

But that's just Internet chatter among lay Catholics. What does a professional think? Michael Sean Winters is the author of Left at the Altar, a book about the Catholic exodus from the Democratic Party, and a contributor to America, a monthly magazine published by the Society of Jesus (the Jesuits). Winters observes that a double baptism is not sanctioned by Rome:

[T]he Catholic Church does not recognize the ritual the Times called “re-baptism.” More importantly, it is difficult to see how submitting oneself to a “re-baptism” would not be a renunciation of your prior baptism. And the technical term for renouncing one’s baptism is apostasy.

Uh, oh! Is Palin an apostate?

Perhaps not. She was a pre-teen at the time of her formal reception into her local Assembly of God church. Sarah didn't do it alone, either, since her mother and sisters got dunked at the same time. If she hadn't been a practicing Catholic anyway, it would be difficult to imagine her clinging to her neglected religion. It would be unkind—un-Christian, even—to describe Palin as an apostate, even if she may satisfy the technical definition.

No, it's more accurate to say that Sarah Palin is a heretic. All that's required for heresy is “the willful and persistent rejection of any article of faith by a baptized member of the church.” I'm sure we could find quite a few. No doubt this will be fatal to the hopes of the McCain/Palin campaign to dominate the Catholic vote.

I guess my skeptical core is older than I think. I remember my Catholic high school being all abuzz one spring (though I think it was later than '73, maybe '75) about the Roe v. Wade decision, and there was a popular movement afoot for everyone to dedicate themselves to the anti-abortion cause and wear a silly plastic bracelet until that uber-evil Supreme Court ruling was overturned, out-legislated, or something.

I refused, and took some flak from my more activist-minded classmates. But even then, still Catholic and very naive in a practical sense, I had the vague feeling that there were situations a young woman could get into that might be made infinitely worse by an unwanted pregnancy.

I think it was my first solid step away from religion.

I am always amazed by the statement "life begins" at conception. What was dead before that? the egg is alive the sperm is alive. I can understand the statement that they believe god transfers the human-ness at conception - but is clearly a religious belief - fine or those that accept that religion.

But we let htem get away with this crap. It is fine for folks to have a religious beleif and they can act in accordance, but project that on others.

I want to highly recommend Praxis Obnoxia for all to get and read. It is very scholarly, scholastic, concise, and very revealing concerning the Invalid Vatican II Rite of Baptism. From the discussions I am having, certain Bishops and Priests re-baptize Protestants and Novus Ordo converts alike to join them to the communion of their churches because of the defective practices performed by the sectarian ministers who allegedly baptized them. While other clergy are Indifferent or do not have a precise praxis. I hear various stories that lack uniformity of ritual. So, I feel this book is something Catholics should consider. I even met certain Orthodox and Uniate Catholic clergy who consider this a very hot topic between Old Calendar/New Calendar and New Ritual/Old Ritual persuasions. Some groups re-baptize, some only use chrismation, some also are unsure. Baptism is necessary by a necessity of means, and the validity of the other sacraments rely on its valid reception, so this is a most important topic.

Here's a summary of the book and how you can get a copy:


Praxis Obnoxia: A Moral-Theological Conclusion On The New Modernist Rite of Baptism.


Praxis Obnoxia: A Moral-Theological Conclusion On The New Modernist Rite of Baptism, investigates the Novus Ordo "Praxis" of baptism as very questionable and positively doubtful for validity. The book provides ample documentation and a bibliography with sources from the Apostolic See, theologians, rubricians, and canonists, original liturgical texts in Latin and English, and lots of photographic illustrations. This book is strongly recommended for all who truly desire to be a good Catholic. For since the importance of receiving a doubtless valid baptism is so great, we felt it necessary to publish this work to be instrumental in the salvation of countless souls. We ask that after reading this book, to inform your neighbor, family, friends, and clergy about this book, lest all is lost.

Wacky Catholics are fun. That's why my family reunions are so entertaining.

Would she still be a Catholic?

My grandfather, baptized a Catholic in Spain, had to come to the United States to stop being counted officially as a Catholic. It's OK, he liked it here; which is more than one could say for Spain during the last 30 years of the gentleman's life.