A fond look back at the Palin dip 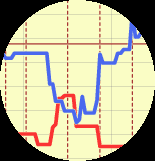 The surge that didn't work

Remember what I said back in August? I said Obama was “building his base.” That was when I noticed an encouraging trend in the electoral vote tallies over at Electoral-Vote.com. (You can click on the image in the sidebar, too.) While McCain appeared to be closing the gap with Obama at that time, the senator from Arizona seemed to be specializing in “soft support.” By contrast, the senator from Illinois kept adding to his solid base. The Votemaster at Electoral-Vote.com, Andrew Tanenbaum, calls a state's electoral vote “solid” for a candidate if the margin in the polls is at least five percentage points. In terms of solids, Obama has scarcely ever looked back. As shown in the latest graph, Obama's solids now total more than the magic 270 needed to elect him president of the United States.

You can, however, see the scary period during which the stately progression appeared to unravel. Let's take a nostalgic look back at the days when the campaign was thrown into turmoil by the surprise announcement that Sarah Palin would be John McCain's running mate. The political ferment was intense as people speculated whether McCain had finally stolen a march on his more nimble opponent. For the days between the end of the Republican National Convention and the first presidential debate, it looked like McCain had kicked over the chessboard and started a new game. The “Palin dip” in Obama's numbers caused the first substantial disruption of his climb to 270 solid electoral votes.

The Palin dip was the result of excitement in the GOP base, the right-wingers who had never warmed to McCain. The hardcore conservatives were now willing to support McCain in the hope that he would die soon after taking the oath of office and make Sarah the neocon queen of America. Unfortunately for them, Palin was not ready for prime time. It was difficult to avoid mocking a candidate who said “All of them” when asked which newspapers she read. It was an unequal contest, rather like an Alaskan wolf on the ground wondering what to do about the gun-toting crazy person in the helicopter. But Sarah turned out to be the wolf. 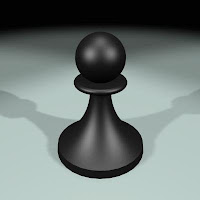 The dip is gone now, of course. (If you feel an impulse to say the dip won't be gone till after election day, please try to control yourself.) The famous “game changer” wasn't, except perhaps in the sense that McCain's attempt to be a queen-maker came to naught. Palin turned out to be a pawn a few ranks short of promotion. But for a few days in September, we weren't sure.
Posted by Zeno at 5:00 PM

The dip won't be gone until 20 January.

There: I never was much for self-control.

Any reason it appears to take so long for the Palin effect to come through? The Dem votes look steady for a week after the RNC.

The Votemaster at Electoral-Vote.com averages what he considers to be the most reliable polls in creating his maps and graphs. The better polls tend to be those that take two or three days of data collection (and another day or two of analysis) before being published. There's an inherent lag in these, unlike with the "snap" polls that were conducted immediately after the presidential debates.

Age and vulgarity will not be overruled. So, is the Palin Dip anything like the Bunny Dip?

(Each serving person at the Playboy Clubs of old, known charmingly as a Bunny, complete with little powder-puff tail, was taught how to bend over properly when serving a drink, so that the customer was given a proper close-up of her whatevers. The official name for this maneuver was the Bunny Dip.)

Am I besmirching the dignity of the Vice Presidency? You decide.