A dispatch from the culture wars

It's a neverending story. It took several attempts, but the right-wing Christian students who sought political power at American River College finally succeeded in taking over the campus student association and holding on to it. Previous efforts had failed because candidates were disqualified for lack of academic standing or resigned after being politically outmaneuvered. For a while, though, it looked like they overplayed their hand when they put their college's student government on record as endorsing Proposition 8, the ballot initiative to ban same-sex marriages in California. Opponents of the student association majority successfully petitioned for a recall campaign, resulting in a brief but furious period of electioneering on campus. The ballots were counted this week, and the recall failed by a narrow margin. All nine targets of the campaign will retain their student council seats for the rest of the academic year.

One of my former students is a professor at American River College. “Steve” filled me on this week's events at his college:

Sorry to tell you this, Zee, but the bastards won. There were lots of signs on campus, including “Save ARC” (from recall supporters) and “Vote No on recalling your fellow Christians” (I'm not kidding; sorry I didn't have a camera with me to snap that one). The local NBC affiliate, KCRA, had live broadcasts from the college on Tuesday morning, the first of two days of balloting. The reporter found plenty of confused people who weren't sure of the issues involved. Some students said they didn't support the recall because it would disrupt the student government. (I don't know how much more disruptive the student government could be.) 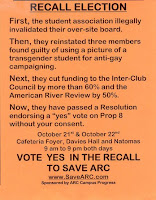 Supporters of the student association majority were out in force on Tuesday, with a big anti-abortion display of dismembered fetuses (“Warning: Genocide Photos Ahead!”) in our central pavilion. Their power base is the local anti-gay, anti-abortion Christian community supported by recent immigrants from the former Soviet Union. They came to the U.S. for religious freedom, but found too much of it, so they're trying to cut it back. Opponents of the student association majority were also all over on Tuesday morning, working the student crowds and handing out pro-recall fliers. (I scanned one for you. It's attached.) Too bad they vanished on Wednesday, the second day of voting. I suspect that's when our Slavic Christians rolled up their victory margin, because they didn't slack off. There's a lesson there, isn't there?

Now watch them say that ARC students support Proposition 8. I don't think that's really the reason they survived, but that's what they'll say. Sorry I don't have better news.

Steve's right. It didn't take long. This morning's Sacramento Bee has the story. Jorge Riley, one of the surviving recall targets, was quick to draw the wrong conclusion:

Riley said he hoped the vote will lead to more involvement in campus politics. In the last election, 545 students voted.

“I'm happier about the number of students that voted than staying in office,” Riley said. Riley said he felt the vote reflected the community support for Proposition 8, which is on the Nov.4 statewide ballot. “This just shows that those judges had no place overturning the law.”

Clearly ARC is not requiring that students pass a logic course for eligibility for student government.
Posted by Zeno at 9:00 AM

It's astonishing. I wonder if ARC President Viar and his other PR people would release mealy-mouthed
statements about "democracy in action" if the proposition were, say, to abolish property-owning for Jews...or to abolish voting rights for African-Americans.

To be fair to the ARC, that's the same thinking that The Shrub displays.

Getting (re)elected obviously meant that people were okay with going into Iraq and whatnot.

Funny enough, I didn't see neither Bliar nor our own blinkering idiot jump to that same conclusion.

The student newspaper over at ARC's website is just complete gibberish. The student government website is "not found". I am unimpressed. I still think Prop 8 will fail, although polling is very close.

Yes, the student newspaper's website is weak. I've gone there for their coverage of the controversy and find it difficult to navigate or read. My friend Steve regularly picks up the hardcopy edition. I've seen several of the issues and it looks a lot better, but it's still just a student paper.

I don't know what the deal is with the student association website, which remains nonexistent. Steve thinks they're too busy trying to get creationism into anthropology classes and the Bible into history classes to waste time on a website. Maybe.