Deafened by the echo 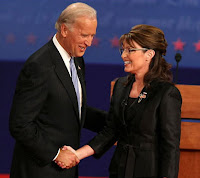 I seldom watch political debates on television or listen to them on the radio. Why should I? Except for the delightful “You're no Jack Kennedy” back in 1988 (Come back, Dan Quayle, all is forgiven!), nothing interesting ever seems to happen. And it's not like I'm going to learn anything new from hearing chunks of the candidates' stump speeches, sliced and diced into little morsels that can be jammed into their responses no matter what questions the moderator is trying to ask. Yawn!

I'll admit, though, that I watched the Biden-Palin debate. There was at least the possibility that Palin would disgrace herself, although I thought it more likely we would get what actually occurred: an overtrained Palin dutifully and perkily delivering her set pieces and talking-point nuggets, repeating them relentlessly even if they didn't fit the questions she had been asked. No disgrace, but no win either. The snap polls showed a significant victory by Biden and once again the McCain campaign was denied the “game changer” it was desperately hoping for. 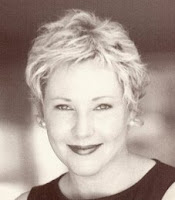 Not everyone saw it that way, of course. Palin supporters were particularly vociferous in declaring their girl the winner. Sacramento Union columnist Katy Grimes shared her joyous debate-watching experience, recounting in the October 12, 2008, edition of the paper how she and her friends cheered Sarah on to a stunning victory over the hapless and dumbfounded Joe Biden. Grimes and her companions were apparently watching a different debate.

In fact, they were. Grimes had her GOP-colored spectacles on and they protected her from unpleasant reality. It's all part of living in an alternate universe, an echo chamber in which you hear no voices but your own. In the echo chamber a complete lack of self-consciousness appears to be a survival skill, otherwise one might die of embarrassment.

In celebrating her new political heroine, Grimes makes some interesting remarks. I've taken the liberty of highlighting some of her words:

From the PTA to large and small city and county councils, all the way to Washington (except for San Francisco, Los Angeles and Manhattan), people all over America relate to Sarah Palin. She is not Hillary Clinton, whose desire for power and control has been as starkly eye-catching as her favorite orange pantsuit. Palin is not a left-wing nut like Rep. Maxine Waters or California Sen. Barbara Boxer. She is not a Nancy Pelosi-type whose liberal bitterness, nonsensical rhetoric and phony agendas are as prominent as her tight face. Sarah Palin speaks from her heart and conscience, not from a vindictive, bitter position, as do most liberals.

That's right, Katy. Democrats—especially the liberal ones—are nasty and vicious creatures who wallow in vitriol. Thank goodness that God-fearing Republicans are too nice to be vindictive or bitter (let alone make catty remarks about a woman's appearance).

Grimes and her friends were delighted with Palin's performance and admit that they mostly ignored Biden's, making it easier for them to consider her the winner. “We found that we mentally tuned Joe Biden out.” (Clever!) There was an exception, however:

Moreover, when he called the people of Bosnia “Bosniacs,” he left us gasping for air—laughing.

How cheerful and superior their laughter must have sounded! Oh, silly Joe Biden! I recall being surprised by Biden's use of the term, too. Instead of laughing and sneering, however, I merely said, “Huh? ‘Bosniak’?” Unlike Katy and her crowd, I didn't assume a term I had never heard before was an incorrect word. When I hear new words, I look them up. Well, what do you know?

Oh, oh! Silly Joe Biden was correct! Sorry, Katy, but your derisive laughter was misplaced. (And you spelled “Bosniak” wrong!) I presume you'll be running a correction and an apology soon.

Kay Grimes probably knows by now that Palin has become a drag on the Republican ticket while Biden continues to be an asset to the Democratic campaign. I have faith in her, though, and I'm confident that she'll keep fighting. She's a scrappy one, is Kay, and that's probably why she can relate to Sarah Palin so well, even if more sensible people cannot. As Grimes puts it herself,

I read the debates every election year. I don't watch them. The extra crap that one gets from watching them - Kerry's weird hairdo, the odd bulge in the upper back of W's suit, Nixon sweating and mopping his brow, Sarah Palin winking away - functions solely to delude the viewer.


Speaking of Quayle. He couldn't possibly have won the primaries, but I'm beginning to wonder if he might have done better against Obama than McCain. I think everyone who enjoys a good laugh half-wishes Quayle was more prominent on the political scene. He had a special way with words. (Of course I despise his politics.)

That whole Bosniak kerfuffle astounds me. That this woman didn't know it is not a surprise. That Charlie Rose and Cokie Roberts didn't is less understandable. That Doris Kearns Goodwin didn't - and allowed herself to believe that Biden, despite his expertise, had made a mistake - is even less so.

According to wikipedia, bosniac is the preferred spelling in the OED, although bosniak is an acceptable alternate.

I guess it just depends which side of the pond you are on.

Still, it seems she just lucked into a correct spelling, as she didn't think it was a word to begin with.

You guys don't seem to understand. Joe Biden committed the one unforgivable sin in wingnuttia--he knew something the pundit didn't. Therefore, he is "elitist" and "out-of-touch". A Democrat trying to win a wingnut's approval is a negative sum game...the only way to win is not to play.

A pox on those what thought the American experiment could eschew aristocracy. Let them eat Riemann circles! Put the commentariat of this blog in charge!

Note that once the linguistic turn has completed its inculcation into western culture, the empiricism which provides the socio-philosophcal milieu in which your beloved Maths can flourish will be no more. It's but a hop, skip and a jump from there to totalitarianism.

Of course you and your overweening crowd wouldn't countenance that, now would you? No, you're just trying to help those poor, benighted plebs who have the temerity to want to see one of their own in office. No will to power to see here! Move along! Which, fine. But I will be amused and then horrified when the Pol-Pot, or Stalin, or Saddam Hussein, or Tito, et al. comes along and disabuses you of your superciliousness. Useful idiots indeed.