The high cost of bigotry 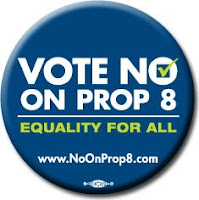 Ain't stupid no bargain neither

A family in Folsom has dug deep into its pockets in order to save California from the horror of same-sex marriage. Rick and Pam Patterson are Mormons who heeded the call of their church to support Proposition 8. The Sacramento Bee reported that the Pattersons are people of modest means, a single-income household with five children to take care of. That's why it was an act of faith for the Pattersons to cough up $50,000 for the sacred mission to overturn the state supreme court ruling that established marriage equality.

It's not exactly an investment. That money is gone whether Proposition 8 passes or is defeated. The Pattersons will raise their sons with dramatically reduced personal savings because they have faith. It's interesting what faith can make people do.

The Pattersons, of course, would argue that their $50,000 contribution is an investment.

The Pattersons, who have been married 14 years, say there were thinking about their children's future when they decided to tap into their savings to contribute.

If the Pattersons have their way, their sons will be protected from same-sex marriage in the future—even if they want one.

The Pattersons have five boys. People argue about what fraction of the population is gay, but let's use a relatively conservative number like 5%, just for purposes of argument. Consider any random group of five kids. The probability that all five will grow up to be straight is therefore (0.95)5, which equals approximately 77%. That is, the probably of having at least one gay child in a group of five is the complement: 23%. That is, the Pattersons have nearly one chance in four of preventing one of their children (or more) from getting married.

I know. I'm a terrible person for pointing this out. After all, Rick and Pam Patterson will never have a gay son. It's simple. If one of the Patterson boys ever has occasion to come out of the closet, he will promptly discover that he is no longer considered a son. Because of his sinful “choice.” It's the Mormon way.

An inspiration to others

I'm not quite as crazy as the Pattersons, preferring rational thought to submission to arbitrary authority, but I did draw some inspiration from their example. I dug into my budget and sent the No on 8 campaign a contribution for $500. I consider it an investment. Maybe for one of the Patterson boys.
Posted by Zeno at 9:00 PM

The sad thing is that the spending by the religious might actually end up with a shameful chapter for California, at least if the polls are to be believed. :(

Yes. Let's do away with all this representative democracy business. The lumpenproletariat simply use it to interpose their odium between we the philosophers and our Great Works!

You did say "at least" to take into account non-independency.

But would that work the other way round, too?

Of course we don't know the family history, but assuming there's been none of teh ghey in the recent past, wouldn't the kids have a lower probability of 'catching it'?

Very good of you to donate. I should really be less greedy and share my 'wealth' around a bit more, myself.

I've also read that the more older brothers a man has, the more likely he is to be gay. You're the mathematician here, but I'd put the odds of the youngest one's being gay higher than 23%, probably more like 50%.

Would someone please tell me how in any way possible gay people's being able to get married does anything whatsoever to opposite-sex marriages?! Considering that SSM has been legal here for years and I haven't noticed anything going on with straight folks, I'm really curious.

"A decade after Denmark, Norway and Sweden passed their respective partnership laws, heterosexual marriage rates had risen 10.7% in Denmark; 12.7% in Norway; and a whopping 28.8% in Sweden. In Denmark over the last few years, marriage rates are the highest they've been since the early 1970s. Divorce rates among heterosexual couples, on the other hand, have fallen. A decade after each country passed its partnership law, divorce rates had dropped 13.9% in Denmark; 6% in Norway; and 13.7% in Sweden. On average, divorce rates among heterosexuals remain lower now than in the years before same-sex partnerships were legalized.

In other words, encouraging any marriage helps all marriage. D'oh!