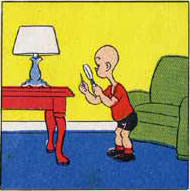 My mother has a firm policy about comic strips: If there are too many words, she won't look at it. (Peanuts and Doonesbury have therefore never been her favorites, even before she developed a right-wing allergy to the latter's political bent.) Mom comes by this inclination honestly, having inherited it from her father.

My maternal grandfather was the last member of the family to be illiterate. Despite this, my grandsire was a great fan of the Sunday comic strips. He would pore over the funny pages and guffaw at the caricatures he found most amusing. With a cheroot wreathing his head in aromatic smoke—and keeping the grandchildren at bay—Grandpa would chuckle heartily at wordless favorites like Henry and smile at the funniest looking characters in the strips with dialog.

I don't mind wordy comic strips, especially since my favorites include Pearls Before Swine, where the humor has much more to do with the dialog than the exquisite art. Piraro's finely drawn Bizarro, however, is an example where the artist's skill is a key component of the reader's enjoyment. Piraro famously embellishes his one-panel comic with recurrent icons, so the daily reader can keep an eye peeled to see where the cartoonist inserted the stick of dynamite, the slice of berry pie, the alien in his flying saucer, or the eyeball.

Bizarro's cartoonist also likes to embed secondary jokes in his panels, today's entry being a good case in point. While the ape responds to the woman's envious observation concerning the greater usefulness of his feet, he reads a newspaper containing the headline “Global Village to Lose Idiot.”

This secondary joke gave me a bigger laugh than the primary joke, but then I paused. The joke, after all, has been on us for eight long years. That part of it hasn't been much fun.

Dear GUT! You're right. That's a picture of The Shrub.


Ah well. Looks like you'll get two fools for the price of one this time round. Well, we'll get, I suppose ...

Barry, what does buttsex have to do with this? Unless there's some unspoken, underlying meaning to the surface meaning (or "text") that you're hinting at...