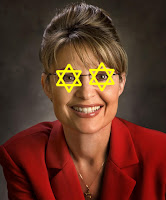 They really ought to have a warning label. Perhaps something along the lines of what South Park uses: “All characters and events in this newspaper—even those based on real people—are entirely fictional. All political analysis is simulated ... poorly. The following columns contains absurd language, and due to its content, should not be read by anyone.” Of course, if the Sacramento Union had been honest enough to provide such a disclaimer, I might not have spent several hilarious minutes enjoying the surreal imaginings of Karen Russo, the Union columnist who mystically perceived what no one else could see: Sarah Palin is the second coming of Golda Meir!

That took chutzpah! Or ergot-laced bread in her cucumber sandwiches.

You can almost hear Sarah Palin saying the same sort of thing.

Interestingly enough, Sarah Palin, the first female GOP vice presidential candidate, and Golda Meir, Israel’s first female prime minister, have a lot in common. Not their politics, of course—Golda was a staunch Socialist, while Palin is the ultimate conservative.

Even so, each is a child of her times.

Right. Palin is a right-winger and Meir was a left-winger. Meir was the prime minister of Israel and Palin is a candidate for vice president. I see the similarities!

A Pair of Pioneers

Golda was born in Kiev in 1898, immigrating to Milwaukee with her family as an eight-year-old. Coming out of a hotbed of Socialist Zionism as she did, being a socialist was perhaps inevitable.

Sarah grew up in Alaska, the last bastion for rugged individualists anywhere in America. For her, being a conservative seems equally inevitable.

You know that old saying: “Geography is destiny”!

Both were real pioneers. Alaska in the 1960s was a wilderness almost as remote and primitive as was Israel in 1921, when Meir arrived as a newlywed. Luxuries were limited in both countries. Life was harsh, physically demanding and downright dangerous. Perhaps as a result, both became strong, self-confident women, leaders with clear convictions, strong opinions and confidence in their own abilities.

Israel didn't actually exist in 1921, but that matters only if you care about accuracy. That is not, however, the focus of this article.

Both married men who didn’t share their passion for elective politics—or so it appears, in the case of Todd Palin. Unlike Hillary Clinton, Sarah’s “First Dude” seems perfectly willing to stay home and bake cookies, if that’s what it takes. Golda’s husband, Morris Myerson, was also quiet and reserved, more interested in theory than politics.

This is unfair to Todd Palin, who is always more than happy to dabble in state government despite his lack of any official capacity. And someone might remind Russo that Hillary Clinton's “First Dude” used to be president of the United States. Why would anyone expect him to have kitchen skills like those of Todd Palin? (Assuming, that is, that Todd Palin actually has any.)

Both women led regular lives before the political bug bit. Sarah’s “PTA hockey mom” status is well known, but she also learned to shoot, hunt and field dress a moose as well as any man. Golda, who started as a teacher and bookkeeper, worked right alongside the men on Kibbutz Merhavyah, digging, planting and harvesting.

Oh, it is so true! Golda Meir lived a completely ordinary life until becoming active in the Labor Zionist youth movement—when she was a teenager. Sarah Palin waited until her late twenties to get involved in politics, but her life is otherwise a virtual mirror image of Meir's!

Sarah will be the first Alaskan to serve in the executive branch, while Golda was the first American citizen to serve as prime minister of Israel.

I'm just making a wacky prediction here, but I foresee that Sarah will not be the first Alaskan to serve in the executive branch of the federal government (even assuming that the vice presidency is part of the executive branch—something that I understand is still an open question in some circles).

Both had to overcome knee-jerk negative reactions to their abilities. Sarah constantly battles the media’s assumption that she’s a reasonably well trained airhead. When Golda and Morris first applied for kibbutz membership, they were rejected. No one believed that the “American girl” would be able to work hard enough. 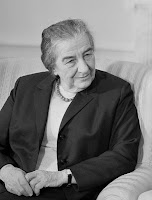 The most interesting parallel between the two is their character, their congruity—what you see is what there is. Each is exactly what she holds herself out to be, nothing more, nothing less. Neither has a pretentious streak anywhere in evidence. Having that deep core of self-knowledge and confidence in themselves, each has a unique way of stripping away superfluous commentary and boring directly into the heart of any issue.

One of my favorite “Golda stories” took place when there was a serial rapist running loose on the streets of Tel Aviv. After several women had been assaulted, Golda’s advisors came to her with a suggestion: place a curfew on women, to keep them off the streets after dark.

“I don’t understand,” Golda said. “It’s a man who’s doing the raping. Why don’t we put a curfew on the men?”

That's an elegant solution that Golda came up with. We eager readers, however, demand to know more. Why didn't Russo tell us whether Israeli rape victims had to pay for their own rape investigation kits?

Sarah’s practicality was obvious throughout her acceptance speech. The Alaska jet?

“I put it on eBay,” she quipped. (Agreed, the jet was ultimately sold by a broker, but it had been listed on eBay, a populist idea calculated to horrify the Washington elite.)

Yes, the attempt to sell the jet on eBay failed, but the story is just too darned cute to let go. There's no need, either, to mention that the jet was sold at a loss to the state. It's all about intent and symbolism.

Much has been made of Sarah’s five children, and how she’ll care for them. Golda had two children, and suffered criticism from her own mother and sister for working. Golda heard their concerns, and in her autobiography, My Life, she wrote, “I stayed up at night to cook for them. I mended their clothes. We went to concerts and films, we always talked and laughed together…but I was never free of the feeling that I was injuring them in some way...

“Being able to vote for your mother isn’t nearly as good as having her at home when you get back from school. Women who want and need a life outside as well as inside the home have a much, much harder time than men because of the heavy double burden they carry...”

That's the problem with women who want to “have it all.” They neglect their children! (I'm sure I saw that somewhere in a list of Republican talking points.) I hear, though, that Sen. McCain has arranged visiting rights for the Palin children. They can see their mother whenever she is not being sequestered to protect her from journalists who might interview her. Things are looking up for the kids once November 4 rolls around, because mommy is going to have a lot more free time after the concession speech.

They share a unique ability to simplify complex issues. Sarah, in her acceptance speech, emphasized the need to drill for oil in Alaska, rejecting arguments that drilling won’t solve all America’s energy problems.

“The fact that drilling won’t solve every problem is no excuse to do nothing at all,” she said.

For her part, Golda summed up Israel’s problems with the Arabs in one sentence: “We will have peace with the Arabs when they love their children more than they hate us.”

The parallels keep piling up! That Russo is one clever writer. I would never have thought of mixing children and oil like that. Oil and water, yes, but not oil and children.

Ben Gurion once called Golda “the only man in my cabinet.” In the U.S., liberals moan about the “pit bull” John McCain set loose.

Until the punch-line, I admit that I had been taking Russo's column seriously, thinking she was genuinely arguing that Palin and Meir were similar. Silly me! It was all an astonishingly elaborate shaggy-dog story designed to set up a cookie joke.

Palin:Average intellect, poor education, and willing to lie like McCain.

Wow. It's a good thing for Russo that Meir is dead.

There's a real problem with this sentence: "Unlike Hillary Clinton, Sarah’s “First Dude” seems perfectly willing to stay home and bake cookies, if that’s what it takes."

The way it's written, it sounds like it's Hillary who should have been willing to stay home. Is that a conservative swipe at her buried in this paean to Palin?

Ridger, it was a swipe at Hillary. I was only [muffled] years old in 1992 and I remember the whole Hillary-Clinton's-cookies mess from back then.

That's what I figured. I'm sure I was older than you back then (hmmm - still am, then).

Sarah Palin can't fill one of Golda Meir's shoes, even if she brings the front section of the Jerusalem Post.

Interestingly enough, I wonder what the writer of that piece thinks of Tzipi Livni, who may wind up being Israel's next Prime Minister. Unlike Sarah Palin, however, Livni isn't exactly the paragon of patriarchal feminine gender performance -- she has medium-length basically unstyled hair, apparently doesn't wear makeup (or much makeup), and has appeared dishevelled in public. You know, like a real person, instead of a staged creation of performative femininity...

Hmmm. She reminds me of a cross between Bridget Jones and detective chief inspector Jane Tennyson.

Not that that's a bad thing, really.

I don't know Bridget Jones at all (either book or movie), but I saw all the episodes of Mystery with Helen Mirren as Jane Tennyson. I must admit that I see no similarity at all.