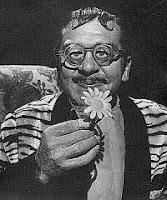 It was an informal after-hours gathering at a colleague's house. We lapsed into talking shop, cheerfully describing the foibles of absent colleagues and the sins of wayward students. I began to recount the tale of a peevish student who got upset near the end of the semester that I would not guarantee his A in the class.

He was one of those extremely bright and extremely lazy students who had never had to break into a sweat in any of his previous classes, so he was offended that matters were proving to be just a little more difficult in calculus. He also liked to arrive late or skip class, so it was extremely unfair of me to average in zeros for all the assignments and quizzes he had missed. He was at risk of getting a B if he did not blow the doors off the final exam. It made him very unhappy.

Could I guarantee his A? No. Could he withdraw from the class? No; too late. He did not come back to class after our discussion and I noticed that he had magically vanished from my class roster. Somehow he had finagled special permission to wipe the slate clean despite having missed the drop deadline. I was deeply dismayed that someone had been willing to pull strings on the little prima donna's behalf, ensuring further postponement of a lesson in responsibility that he seriously needed to learn. In fact, I was more than dismayed. I was angered by his success at gaming the system. I told my colleagues:

“That little shit worked some angle and managed to talk a lamebrain flunky in administrative services into preserving his delicate little butt from the risk of getting a demerit on his transcript.”

My complaint was greeted with knowing chuckles. My colleagues had all met such students. One of my listeners, however, had a bemused smile on his face for a different reason.

“Hey, didn't anyone notice? Zee said ‘shit.’ Jesus Christ, Zeno, how much did that little fucker piss you off if you're starting to swear now?”

Busted! My exceedingly observant colleague was correct. I probably have the cleanest mouth in the math department. Perhaps the entire school. Hell, in all of North America, with the possible exception of a few convents. It rather sets me apart from my fellow math professors. It sure as hell sets me apart from my students. (Notice how I use “hell” for emphatic stress as if it still retains some currency as a profanity? Heck, how sad is that?)

My students, both male and female, litter their language with the f-word and don't even bat an eye. They stroll by with their cell phones stuck in their ears and the profanity flows freely and casually. Fascinating. That's how denatured profanity has become. F-bombs used to create shock waves in my youth. Today there's barely a tremor.

I never use the f-word myself (see how demurely I use the euphemism?), with minor exceptions for when I'm quoting others (see above, for example, or Dick Cheney). And the time when a young friend died as we sat vigil in the intensive care unit. On that occasion I combined it with some suitable blasphemy, which might have offended God if only he had remembered to exist.

It's perhaps even worse that I am a liberal blogger. I don't fit in. My leftish peers are decidedly more pungent in their prose than than those who describe themselves as wingnuts—I mean, conservatives. (Sorry.) The right-wing blogs even take quite a bit of pride in how clean their language is. Frankly, I think they should pay more attention to what they say than how they say it, but that appears not to concern them. (I guess it's okay to support torture if you say it nicely.)

My Listerined language is yet another item on the tally sheet that suggests I could be a repressed right-winger. I don't drink. I don't use drugs (except for those which are duly prescribed by a physician). I don't sport any tattoos or piercings. My hair is short. I often wear ties. I am thoroughly white-bread retro-conventional. I could infiltrate a Republican gathering without anyone being the wiser. (Of course, I'd have to bone up on my profanity if I were slipping into a meeting of McCain's campaign leadership.)

I was even mistaken for a Mormon once.

Even so, I have no big plans to change. I'm perfectly happy with my clean-mouthed lifestyle, supplemented as it is by a simply enormous vocabulary. There may even be advantages. For example, an epithet like “shithead” would just roll off my kid brother's back, but “microcephalic imbecile” always seemed to offend him quite satisfactorily.

My avoidance of Carlin's notorious seven dirty words may be a slight handicap, and will surely prevent my becoming a celebrated rap artist, but I'll manage somehow. And frankly, my dear, I don't give a damn.
Posted by Zeno at 8:00 PM

One of the reasons I read your blog is because I love the way you write. There's something absolutely fantastic about the way you put together sentences that I simply can't put my finger on, but would love to aspire to emulate had I any idea what it was.

That said I don't think there's anything wrong with swearing, per se. When speaking with friends I tend to swear quite a bit. But I seem unable to use much profanity when writing my own blog - and again, I don't even know why! Even when I'm angry about something I tend to censor myself, writing fracking instead of the proper f-word and things like that.

Curious, the way people's treatment of language is so different...

I can't decide whether I like the normalization of cursing or not. It's nice not to worry about offending people, but I think a lot of words are very overused.

I was brought up in a house where bad lanuage just wasn't heard of. It still isn't. My grandmother still spells the word "hell" rather than say it. My father, sister and I all recoiled in fear when my boyfriend dared refer to someone as "an asshole" in front of my mother. We honestly worried her head might explode.

My friends' families on the other hand... to them cursing is like breathing. They can try to stop if they really have to, but it never lasts for long. For some of them, I don't even think they realize they're doing it.

I can say I'm rather happy to have landed somewhere in the middle. I'm not offended by coarse language- it's really all just words to me- but I don't use it that often. On the rare occasion I get mad enough to curse, everyone's surprised enough they sit up and pay attention. I kind of enjoy having that little power.

I'm sort of the other way from sublunary -- people know I'm done, uh, fucking around if I stop swearing. When I lapse into this rapid-fire quasi-academic discourse that's utterly acidic, they know I'm really, really upset. I don't really give a rat's patoot about using or not using four-letter words, though.

I do think it's kind of funny how people separate them out from the rest of their vocabulary, like they're somehow different, or something -- the people who make the argument that people who swear must have a deficient vocabulary or something. Heh. I'll put my vocabulary (and limit myself only to my native language and not to any of the other four, if you prefer) up against any of theirs, and raise them this: If some socially-undesireable maladroit has just done something incredibly offensive to your person, and is busily speeding away from you, you have about thirty microseconds to react. And I hate to break it to the prudes, but social miscreants pay a lot more attention to "Fuck you!" than "You suppurating, festering pustule!" By the time you get to the fifth syllable, the perp's long gone, and everyone else is looking for your Bluetooth earpiece. Brevity is also the soul of l'esprit d'escalier.

"Microcephalic imbecile"? Sounds almost like you went to school with Brook McEldowney.

Well, for what it's worth I have neither tattoos nor piercings. Nor have I drugged.

But then again - I was somewhat rightwing in my youth ...

I seem to remember an observation that sums the whole thing up for me. "Profanity is the crutch of the inarticulate mother-f@*%er."

Calling someone a "little shit" is NOT swearing. Cursing, swearing, and scatological/obscene language are different things. The first two, plus blasphemy, only make sense within a community of believers: "God damn you to hell", "I swear on a stack of bibles and my saintly mother's grave", and, I suppose, "Jesus H. Christ".
After my 25 years of science and math teaching, I was a Vice-Principal and Principal for a few years. When an English teacher dragged some poor miscreant into my office for "swearing", it was all I could do to resist giving the teacher my little lecture above. I did resist, and meted out a consequence commensurate with the inappropriateness of the remark.