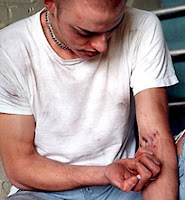 Mainlining, but not mainstream

Like a junkie with the needle still dangling from his arm, the Republican National Convention is pumped up and feeling good. Life was such a downer recently, but things are looking up! It sure is better than feeling down—all that gloom after that damned Democratic convention.

The Republican junkie is assimilating a big dose of uncut Palin. The euphoria is real enough, although it's not based on reality. Quite the contrary. As has been amply pointed out, Gov. Palin's speech was riddled with lies and distortions. Astonishingly enough, the freshman governor of Alaska did not hesitate to repeat several factually compromised statements that had been definitely revealed as false in the days following the announcement that she was Sen. McCain's running mate. In particular, she again claimed as governor to have opposed the “bridge to nowhere,“ although its fate had been sealed before her election and before her election she had expressly endorsed it. (Two lies in one statement; that's efficient!) She repeated the assertion that she disdained earmarks, when as mayor of Wasilla she gobbled them up and bragged about it.

Why lie so transparently?

It's all part of rallying the troops. And in that sense Gov. Palin was extremely successful. She pandered to the worst sentiments of the conventions attendees and they lapped it up. Her snide remarks and sarcastic sallies were the stuff that hardcore Republican dreams are made of.

Less likely, however, to attract the uncommitted.

And that's why in the longer run Palin's well-executed speech will fail. While many commentators were grading her effort with an A, some of her detractors were insisting on a D. Like the English professor that I am not, I would give her both grades: an A for the composition's technique and a D for its content. In the short term, the A aspect of her speech stirred up the troops, who are now enjoying their temporary high. As the weeks progress, however, the D aspect of the speech will alienate fence-sitters who might have been drawn by less specious content.

The folks in the convention didn't care about the truth of what Palin said. They cared about the way she said it. The speech served its purpose as a cheerleading effort for the political party that spawned our current cheerleader president. But a good cheerleader does not make up for a weak team.

The one sure consequence of a junkie's high is the crash that soon follows.
Posted by Zeno at 10:00 PM

I just left Maria Maria's blog where she is of the opinion that Palin is one of the early recruits of GOPAC, Newt Gingrich's conservative training program for new candidates in the GOP. All the earmarks of Gingrich's philosophy are present in Palin's speech and background. I hope you're right that the media will look much deeper into her issue positions and less into her personality and family between now and election day.