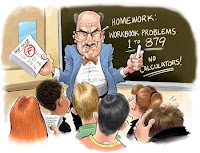 We math teachers are a relentlessly logical and thoughtful cohort of people. So why don't we agree on everything all the time? Anyone who has witnessed the knock-down and drag-out battles of the math wars knows that we don't. It depends on your initial assumptions. Most math teachers will cheerfully agree on whether a conclusion is the logical consequence of a set of axioms, but then they'll fight to the death over the axioms.

Courtesy of the McClatchy Company's newspapers, we have a stunning example of political logic from an old math professor. Shall we see if we can identify the axioms from which his logic flows?

Palin: A home run for McCain

Wow! Talk about a bombshell? Talk about thinking outside the box? Talk about going off the reservation? Let the game begin.

And all the so-called pundits thought John McCain was too old and over the hill to make important strategic decisions in a timely and impactful fashion. This could be a major-league home run; it puts a shot right over the bow of the Democrats and will haul them up short in their effort to bring disaffected Hillary Clinton supporters and independents into the Obama fold.

Alaska Gov. Sarah Palin has the right politics. She is a reformer who has stared down Sen. Ted Stevens, she is a maverick, she is a hockey mom, she is very comfortable in a man's world, she is a hunter who knows the difference between the business end and the butt end of a weapon, she has been to the Middle East and has a son serving in the military, she is pro-life, she is articulate, she is younger than Barack, she is compelling, and she has a strong, comprehensive energy position. In the words of an old math professor, she is a running mate who complements and supplements John McCain to a “T.” Enough said.

Passing lightly over the disdain-worthy “impactful,” we must consider whether the choice of Palin “will haul [Democrats] up short in their efforts to bring disaffected Hillary Clinton supporters and independents into the Obama fold.” First of all, we're already there. Former Clinton supporters are not looking for an anti-choice, anti-science alternative to Sen. Obama. By what magic are we supposed to be inveigled into voting for a right-wing conservative? Are we suddenly no longer pro-choice? Second, independents are not necessarily charmed by Sarah. She stoked up the base; she didn't expand it.

Palin “faced down Sen. Ted Stevens”? I guess that came after she headed one of his 527 campaign committees and her support of his “bridge to nowhere” earmark. (She really used to like earmarks, you know, but she's over that now.)

Palin can fire a gun. I did not know that was a requirement for the job, unless the vice president is expected to shoot hunting companions in the face.

She is younger than Barack. That's a positive thing? Goodness! Until recently, the GOP insisted that Sen. Obama was a callow youth. Now Gov. Palin's tender years are a campaign asset. The rules of the game keep changing.

My favorite part of the math professor's letter is the cutesy bit about how Gov. Palin “complements and supplements John McCain.” As you may know, complementary angles add up to 90°, while supplementary angles add up to 180°. The letter-writer is sending a discreet shout-out to his fellow math teachers. As one of his innumerable mathematical colleagues—albeit a liberal one—I cannot resist going off on my own tangent here. Let's puzzle out the possible significance of Gov. Palin being both a complement and a supplement to John McCain.

I begin by schematically indicating where the nation needs to go. It's just an arrow, pointing to the conventional “east.” (Self-described wits might wish to observe that the arrow points to the right, but don't try to make too much of a simple mathematical convention. That's my job.)

Then we note that McCain is not planning to go in the right direction. He's significantly off. 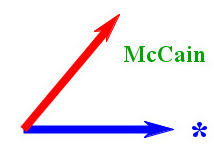 If Palin is his complement, then McCain-Palin together must go off in the 90° direction, at right angles to the nation's best interests. Oops!

Even better: If Palin is his supplement, then McCain-Palin must be heading in the direction exactly opposite to where we should be going—off by 180°. This may an even more accurate representative of McCain-Palin policies.

To be even-handed, let's consider Sen. Obama's political direction. There he goes, doing the best he can for his country, trending strongly toward all that is good and decent.

Why don't I, the slavishly devoted Democrat, show him heading due east toward the promised land? There's some fine print in the Obama illustration. Let's zoom in to see what it says:

Oh, that's right. Obama ended up supporting a very slightly amended FISA bill (not nearly amended enough!) and he has failed to disavow Bush's motley crew of faith-based initiatives. He may even expand them!

Well, you can't have everything. Any logical person knows that. (I'm not as sure about the letter-writing math professor, though.)
Posted by Zeno at 4:30 PM

Palin can fire a gun. I did not know that was a requirement for the job, unless the vice president is expected to shoot hunting companions in the face.

Well, if the VP doesn't know which is the business end, they might end up shooting themself in the face. Um, not that there's anything wrong with that....

"By what magic are we supposed to be inveigled into voting for a right-wing conservative?"

By the magic of people with vaginas not having any brains. Obviously.

I must have missed this; where does the “maverick” characterisation come from and since when do Conservatives consider this to be a good thing?

kai: "maverick" because a decade or more ago he didn't take all his marching orders from the party whip. It's good because it shows that despite sharing his party, he's not going to be Bush all over again.

Hmmm. I would add some items to your Obama asterisk :

I'm sure there are more (how did he vote on the bankruptcy bill, the torture bill, has he spoken against rendition) but I'm ignorant of Obama's positions on these issues. (I'm sure I could find out, but why bother - he's proven he's a shill and I won't vote for him)