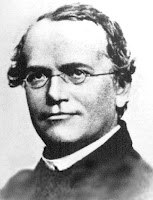 But don't actually read it

The October 2008 issue of Acts & Facts has been published by the Institute for Creation Research. In addition to a querulous editorial about the unfairness of the Texas Higher Education Coordinating Board turning thumbs down on ICR's plan to offer graduate degrees in “science” (as they define it), Acts & Facts presents a tribute to that famed creationist and anti-Darwinian, Gregor Mendel.

Surprised? I was. While I'm sure that Mendel was essentially a creationist, having been a Roman Catholic monk in the days before Darwin published The Origin of Species, I didn't realize that the good Augustinian abbot was on record as being an unfriend of Charles Darwin. Nevertheless, that's what Christine Dao claims in her article Man of Science, Man of God: Gregor Johann Mendel.

Ms. Dao is identified as the magazine's assistant editor and bears no academic initials after her name, so we may presume she is not one of ICR's scientific superstars. We should still, however, be able to expect some simple journalistic competence, perhaps seasoned with just a dash of fact-checking. And by “fact-checking,” I mean more than cutting and pasting from Wikipedia.

Let's beginning with a brief review of the key scientific achievement of Mendel's life, his experimental discovery of the laws of inheritance. This is what Wikipedia says:

Between 1856 and 1863 Mendel cultivated and tested some 29,000 pea plants (i.e. Pisum sativum). This study showed that one in four pea plants had purebred recessive alleles, two out of four were hybrid and one out of four were purebred dominant. His experiments brought forth two generalizations which later became known as Mendel's Laws of Inheritance.

Between 1856 and 1863, he cultivated some 29,000 pea plants (Pisum sativum). The study showed that out of four plants, one received recessive alleles, two were hybrids, and one had the dominant alleles. His experiments were the foundation for two generalizations known today as Mendel's Laws of Inheritance. Based on his work, he produced the paper Experiments on Plant Hybridization and read it to the Natural History Society of Brünn in 1865. The society published the paper in its Proceedings in 1866.

We all know, of course, that facts are facts, so there are only so many ways to recount the same facts. And, if you have to tell the same story, it's just more efficient to use essentially the same words, too. Ms. Dao is efficient.

But not thorough. At the end of the excerpt I quoted, Wikipedia notes that Mendel's discoveries languished for several years. In a later paragraph, the on-line encyclopedia reports one of the reasons for Mendel's initial neglect:

At first Mendel's work was rejected, and it was not widely accepted until after he died. The common belief at the time was that Darwin's theory of pangenes were responsible for inheritance. The modern synthesis uses Mendelian genetics.

Ms. Dao should have clicked on “pangenes” to discover the nature and timing of Darwin's theory of pangenesis, because the Wikipedia article does not make the sequence of events entirely clear. That extra bit of effort would have saved her from the following embarrassing claim:

Mendel's paper was rejected at first, since he evidently produced it as a counter to Darwin's theory of pangenesis, which was popular at the time and accepted as being responsible for inheritance.

Excuse me, Christine, but Darwin published his theory of pangenesis in 1868, while Mendel published his paper in 1866. You see the problem?

Ms. Dao is good enough, however, to cite a paper by B. E. Bishop as a reference. In Mendel's Opposition to Evolution and to Darwin, Bishop argues that Mendel could have been familiar with the 1860 German edition of Darwin's Origin and therefore viewed his paper on heredity as a contribution toward the fixity of species and therefore opposed to Darwin's views. This, at least, is a defensible thesis, although Mendel never mentions Darwin or evolution (let alone the future theory of pangenesis) in his paper.

As for Ms. Dao's time-disordered account of events, there is no defense at all.
Posted by Zeno at 12:30 PM

Darwin's paper created a ripple in the space-time continuum, you see, and Mendel was reacting to the disturbance in the Force...

Stephen Jay Gould dealt with the issue of whether Darwin's work was meant as a rebuttal to Mendel. Turns out that Darwin had a copy of Mendel's paper in his library -- unread.

Maybe someone has the reference, either to the Natural History volume and number of of Gould's piece, or to the book published later by Gould, which carried the same commentary.

Seems like your argument is with Oxford Journal-- Journal of Heredity 1996. Maybe you could have checked out her footnotes before trashing her. Even before Darwin published his work, his work and belief was known on pangenesis.

Mendel's Opposition to Evolution and to Darwin
B. E. Bishop

Although the past decade or so has seen a resurgence of interest in Mendel's role in the origin of genetic theory, only one writer, L. A. Callender (1988), has concluded that Mendel was opposed to evolution. Yet careful scrutiny of Mendel's Pisum paper, published in 1866, and of the time and circumstances in which it appeared suggests not only that it is antievolutlonary in content, but also that it was specifically written in contradiction of Darwin's book The Origin of Species, published in 1859, and that Mendel's and Darwin's theories, the two theories which were united in the 1940s to form the modern synthesis, are completely antithetical.

Ha, ha! I already trashed you over at Pharyngula, coacholson. Since you were kind enough to repeat your bogus argument here, I'll repeat my refutation, thus:

Pay attention, coacholson, Bishop's argument in the Journal of Heredity is that Mendel was acquainted with Darwin's Origin and published his paper on peas in opposition to it (despite never mentioning Darwin or evolution in his supposedly oppositional paper). Maybe, but doubtful.

Christine Dao, however, misread Wikipedia and Bishop and then asserted that Mendel published his paper in opposition to Darwin's theory of pangenesis, which did not exist until after Mendel published. Dao is a creationist goof-up.

P.S.: Did you noticed I provided a link to the Bishop article? That's because I check references, apparently better than Dao does, since Bishop at least knows the chronological order of events and Dao misconstrued his point.

Ed Darrell:Turns out that Darwin had a copy of Mendel's paper in his library -- unread. seems to be an unconfirmed anecdote. I don’t remember offhand where the debunking is.

V. Orel, emeritus director of the Mendel Museum in Brno, deals extensively with the ideas of Mendel about Darwin in his 1996 book "Gregor Mendel: the first Geneticist" (Oxford UP). – pp 188-199.Orel mentions that copies of the German translation of Origin of Species (1862) and Variation in animals and plants under domestication (1868) are present in the monastery library, with some annotation by Mendel. The annotations seem limited to what was directly relevant to Mendel’s own work. Orel states that Mendel was opposed to pangenesis and that no evidence on what Mendel thought of “descent with modification’ exists.