What the other hand is doing 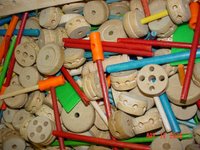 It's easy to go wrong in calculating probability, which is probably why creationists like it so much. With a few easy, simple, and incorrect assumptions, they can crank out huge improbabilities that “prove” evolution is impossible. Even Sir Fred Hoyle, competent enough in maths to know better, cobbled up a silly example about the unlikelihood of a twister assembling an aircraft while passing through a junkyard. Sure, that's not going to happen in the lifetime of the universe, but neither is it a good model for the unguided natural selection process that produces descent with modification. (See, for example, Climbing Mount Improbable for an explanation of incrementalism and fitness by Richard Dawkins.)

Hoyle is propping up an “all at once” straw-man argument when he offers this kind of criticism of the theory of evolution. It's an argument that appeals to doctrinaire creationists who are eager to find something scientific sounding with which to buttress their religiously motivated conclusions. Hoyle was not at home among the Bible-thumping creationists, but he is eagerly embraced by them as a helpful fellow traveler—one of the few genuine men of science who routinely criticized the theory of evolution. Today's anti-evolution activists are quick to follow in his footsteps.

We previously met R. Josiah Magnuson when he was winning an Answers in Genesis essay contest with a paper on the evils of natural selection (and Marxism and democracy and Naziism—they're all practically the same thing) and signing on to a quixotic presidential campaign as its official intelligent design advisor (which probably tells you all you need to know about the candidate in question). Josiah is a bright teenager with superior writing skills who has been thoroughly steeped in a creationist homeschooling environment, and he is ready to take up cudgels to defend the doctrines of his indoctrination. He already writes as well or better than the average Discovery Institute scholar , so his future is practically foreordained—unless he actually begins to think critically about the arguments he's recycling. That would disqualify him from becoming a DI scholar.

Josiah has written a series of “disproofs” of evolution with the unalloyed confidence of a Truth-possessor, but it's not particularly difficult to pick them apart. For example, consider his take on the handedness of certain organic molecules:

Proteins in cells reguire [sic] the use of solely left-handed molecules in their assembly. This means that when the first proteins were formed, they were created out of a solution of 100% left-handed amino acids.

This occurance [sic] is, to put it simply, quite impossible. Even with all our fabulous modern instruments, there is absolutely no way to make a completely pure solution of left-handed amino acids. In the cell today, there is a mechanism to keep right-handed molecules from being used. But what about the beginning? The primordial soup had no mind of its own. Clearly, vast amounts of Design are necessary.

I added the emphasis to the last sentence of that first paragraph. It's a false conclusion, as well as the key point in Josiah's argument.

Why is he wrong? Consider: It's like saying you can't build a model out of Tinker Toys if someone mixed in some Lincoln Logs. In fact, however, only the pieces that fit together can be hooked up. You could use Tinker Toys or Lincoln Logs, but they're basically disjoint sets of building blocks—like those right-handed and left-handed amino acids.

Josiah acknowledges that naturally occurring racemic mixtures of amino acids are no barrier to the flourishing of life today because living cells pick out only the left-handed isomers for assimilation. He assumes that some elaborate mechanism had to be present from the very beginning to allow the most primitive self-replicating organisms to choose between left and right. The reality, however, is much simpler.

It was a coin-flip whether life on earth would be constructed along left-handed or right-handed lines. What we see today indicates that, by merest coincidence, the first successful replicating units were left-handed. We probably wouldn't even call them living things if we were privileged to see them today, but once the crucial device of replication was available, the path was set. At least insofar as handedness was concerned. The succeeding organisms preserved the handedness of their progenitor, absorbing left-handed molecules and ignoring the right-handed ones. It's not so much a judicious selection (by God or a Designer or Whatever) as it is a matter of what fits.

It's survival of the fittest.
Posted by Zeno at 2:00 PM

I'd like to call shennanigans on the assertion that, "Even with all our fabulous modern instruments, there is absolutely no way to make a completely pure solution of left-handed amino acids." Chemists make left or right handed molecules all the time in amazingly high purity, and it's not "fabulous instruments" that do it. Lots of hard work and a good knowledge of chemistry are used to accomplish that task. Although, maybe he thinks those two years of organic chemistry I took are all a pack of lies. Lies that seem to work pretty well when used in the lab.

Thanks, mo'n: I suspected that Josiah was off the mark there, too. I'm pleased to have that confirmed by someone who knows the field. It's one more instance of a creationist using the trope "no one can do it" to conclude that "God did it." And one more instance of their being wrong.

Josiah is a bright teenager with superior writing skills

The former does not follow from the latter. In fact, he's only an accomplished rationalizer and regurgitator, not a comprehender or problem solver.

Painful would have been to get it right: Survival of the fittingest.

I never said it did. Josiah gives ample evidence of a budding intellect as he pieces together his arguments. His problem is that he's limited by his blinkered perspective to positions that were long ago refuted; he's immersed in a system that insists on biblical inerrancy and literalism. The poor guy is doomed to be wrong, but all the authority figures around him tell him over and over again that he is right.

You don't have to be a dummy to be a creationist (especially a young creationist), although we can all cite cases where it helps (e.g., apparently everyone at the Discovery Institute). Give the boy some credit: He's doing the best he can with what he has and he may yet discover the shoddiness of his materials.