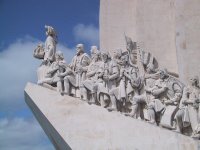 ‘Interpret, is it? As I told you before I do not speak—not as who should say speak—Portuguese. Still less do I understand the language when it is spoke. No man born of woman has ever understood spoken Portuguese, without he is a native or brought up to comprehend that strange blurred muffled indistinct utterance from a very early, almost toothless, age. Anyone with a handful of Latin—even Spanish or Catalan—can read it without much difficulty but to comprehend even the drift of the colloquial, the rapidly muttered version...’

—Dr. Maturin in Blue at the Mizzen, Patrick O'Brian

Major holidays in my family are always an excuse for people to converge on the home in which my parents reside, the house they originally built when they first got married over fifty years ago. Despite the numerous additions, it remains recognizable as the home in which I grew up. Inside, though, there is a notable difference—and I'm not just talking about the often-revised decor.

Everyone speaks the English now. When I was young, it was always Portuguese. I grew up speaking that language first. All four of my grandparents were early twentieth-century immigrants from the Azores and my parents and uncles and aunts all knew Portuguese as the mother tongue. Of course, I spoke it, too.

I picked up English later, as my second language, but I recall no particular difficulty about it. I plunged into kindergarten with no special communications trauma, so my English skills must have been adequate to the task. Perhaps our first television had something to do with that, arriving in our home a year or two before I started school.

My father and his siblings all married children of Portuguese immigrants, so all of my paternal cousins also spoke Portuguese—at least initially. On my mother's side of the family, however, no one except Mom married a Portuguese-speaker. My maternal cousins all grew up monolingual anglophones.

My brother has a Portuguese-speaking wife, so their daughters retain the language in fair measure. My sister and my Anglo brother-in-law, however, have English-only sons. Whereas my brother-in-law used to sit patiently through the incomprehensible Portuguese babble of family gatherings, his time in purgatory is over. English is the rule in family gatherings now. We hear the occasional burst of Portuguese vocabulary (mostly, it seems, when children are being admonished), but the trend is clear. Each generation knows less than its predecessor.

My own Portuguese language skills are rudimentary. It's been more than twenty years since my paternal grandmother died, the last of the Portuguese-only speakers in the family. I used to talk to her every week, even after going off to college. She insisted that I call her collect whenever I wanted, so I made a point of a regular weekend phone call. I haven't used Portuguese regularly since then, although I retain a modicum of fluency because the rudiments are so thoroughly ingrained.

But I said “rudiments,” and that's the right word. Portuguese is highly phonetic, so I can read it after a fashion, but an encounter with Brazil's O Globo or Portugal's Diário de Notícias quickly reminds me how limited my vocabulary is. When I speak English, I present myself as a highly educated person with a large (really large) vocabulary. When I try to express myself in Portuguese, I revert to my untutored childhood, conjugating verbs by ear (because they sound right—or not) and juggling the kiddie lexicon that sufficed for casual conversation with my grandmother. The natural consequence is that I avoid speaking Portuguese outside my family—where it's no longer used much anyway.

I do credit my childhood bilingualism as a major building block in my subsequent literacy and vocabulary. I've since studied (dabbled in, really) other languages, and that early experience of shifting gears in my head between Portuguese and English gave me an edge I gradually grew to appreciate. Still, I wish I could sound like a gentil-homem sofisticado when I open my mouth to speak Portuguese.

It would be, if you picked it up again.

I had a similar experience with the Italian language. I was fluent as a child, but as my mother's English fluency increased, my use of Italian decreased. I lost quite a lot of it, but have since become fluent again. Although I do occasionally despair of not having quite as extensive a vocabulary in Italian as I do in English, I'm evidently fluent enough for Italians from other regions to identify my accent and manner of speaking as Roman, not foreign.

Should you wish to regain your grasp of Portuguese, it can be done. Languages are easily lost when they fall into disuse, but they're just as equally regained if you start to use them again. It helps, of course, to be surrounded by people who speak the language, but it's not impossible without that advantage either.