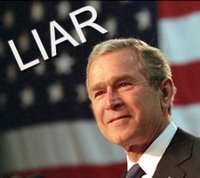 Bush is a liar. Duh!

During the 2000 presidential campaign, the allegedly liberal mainstream media took great joy in depicting Vice President Al Gore as a compulsive liar—or at least someone terribly confused about the nature of reality. A well-oiled Republican campaign machine cranked out press release after press release detailing supposed misrepresentations by the Democratic presidential nominee, which allegedly reputable news agencies dutifully picked up and reported as if they were fact. The exasperating “Gore claims he invented the Internet” story is merely one of the most famous of many such attacks; it lives on today despite having been thoroughly refuted.

Candidate Bush, however, got a free ride, despite its being common knowledge in the press corps that there was something funny about almost every major item in his résumé: Why didn't Bush report for his mandatory flight physical while in the Texas Air National Guard, and why was there no documentation that he completed his hitch? Why was it so difficult to get good data on the supposed success of Bush's public education policies in Texas? (Mostly likely because hard numbers would have shown the degree to which nonperforming students were omitted from the data so as to create the appearance of success, as noted by Peter Schrag: “Dropout rates rose, teachers had to emphasize tests and drills at the expense of the broader curriculum, and school bureaucrats were involved in rampant cheating and falsification of data in places like Houston, where [Rod] Paige was superintendent before Bush made him U.S. secretary of education.”) The list is easily extended.

The mainstream press has been very reluctant to call the president of the United States a chronic liar, even as the evidence piled up. Now that's he's been rendered an extremely lame duck by the Democratic takeover of both houses of Congress, journalists are perhaps emboldened to attack the prevaricator-in-chief. The reporters can follow election returns as well as the next guy. Perhaps these recent developments are part of the reason that the San Francisco Chronicle, Nancy Pelosi's hometown newspaper, finally called Bush a liar on its front page. The actual language of the Chronicle's Washington bureau chief was slightly more diplomatic—but only slightly:

(12-01) 04:00 PST Washington — It would be reasonable to conclude after watching President Bush in the Middle East this week that the administration has no plans to withdraw U.S. troops from Iraq.

“This business about graceful exit just simply has no realism to it at all,” Bush said at a news conference Thursday morning in Jordan with Iraqi Prime Minister Nouri al-Maliki.

Yet some experts say it would be foolhardy to assume, just because Bush said it, that the statement is true.

There is mounting evidence that the world of public Bush-speak—from his vigorous support for al-Maliki and Defense Secretary Donald Rumsfeld to his rejection of direct diplomacy with Syria and Iran—bears little relation to what goes on behind the scenes.

Senior White House officials even tangled this week with reporters who suggested that al-Maliki had snubbed Bush at a dinner with Jordan's King Abdullah. A three-way dinner had never been planned, the officials insisted—until the reporters forcefully pointed out that it had been on the president's public schedule for nearly a week.

Frankly, I was delighted when the president expressed his undying support for Donald Rumsfeld just before the November elections. It was a gift to Democratic candidates everywhere. When Rumsfeld was summarily fired the days after the votes were cast, the president's intentional lie was starkly exposed—as he smirkingly acknowledged when he was called on it in his next press conference. Bush's excuse was that he didn't want his plans to fire Rumsfeld to come out before the election. Frankly, he was in a lose-lose position. Firing Rumsfeld before the election would have taken an issue away from the Democratic Party, which had been demanding the defense secretary's head, but it would have probably dismayed the president's diehard defenders, the core of his shrinking base, some of whom were wondering aloud whether it would be better to sit the election out.

At a time when Bush is under increasing pressure to significantly modify his Iraq strategy, it is difficult to know whether his public rigidity is a sign he is ignoring calls for change or simply putting a resolute—some would say stubborn”face on a policy about to undergo significant alterations.

“It does seem from his rhetoric, if he's true to it, that he's not going to bend. That he's going to continue down the road toward further disaster,” said historian Robert Dallek, who has written biographies of such wartime presidents as Franklin Roosevelt and Lyndon Johnson.

“But with this guy, I don't know. It's so hard to know what's going on behind the scenes. We'll all know in 30 to 40 years when they open up the documentary record,” Dallek said.

The pressure on Bush is reaching a crisis, as more than 2 out of 3 Americans disapprove of his handling of Iraq.

The bipartisan Iraq Study Group, put together by the White House and chaired by close Bush ally James Baker, reportedly will call for a significant drawdown of the 144,000 U.S. troops as well as for direct negotiations with Syria and Iran—which Bush has resisted—when it releases its report next week.

Members of Bush's own Republican Party have grown increasingly vocal about the need for a fresh approach, and many independent analysts say the Democratic victories in the congressional election last month were a clear sign of the public's demand for a new war policy.

Along with the deteriorating situation in Iraq, the circumstances in Washington prompt some to conclude that Bush is gearing up for changes far greater than he is letting on.

“I can't imagine over the months ahead ... that some troops won't come home,” said retired Major Gen. Robert Scales, author of Certain Victory: The United States Army in the Gulf War.

“If you look at the trend lines over the next year, I'd be very surprised if you didn't see a steady reduction under 100,000 over the next few months,” Scales said.

Bush has steadfastly rejected any discussion of a timetable for pulling out troops, saying “all that does is set people up for unrealistic expectations.”

“The idea that the prime minister or the president is sitting around looking at their watch is not the way you conduct war,” National Security Adviser Steve Hadley said aboard Air Force One on Thursday.

But military commanders have been publicly ambiguous about future troop levels, prompting speculation that extra troops might be placed in Baghdad in the short term, perhaps presaging a reduction of troops in the not-so-distant future.

There are signs the White House is taking a more critical view of the deteriorating situation than Bush has publicly allowed.

Even as he spoke admiringly about al-Maliki, a classified memo written by Hadley and leaked to the New York Times this week cast doubt on the administration's estimation of his ability to stem the violence. The memo also hints at the possibility of direct diplomacy with Syria and Iran, which the president has publicly dismissed.

Candid talk is often a casualty of war. Roosevelt spoke warmly about the Russians in public during World War II as he worked privately to contain them. Richard Nixon lied to Congress about the bombing of Cambodia. Bush's credibility has declined steadily since the weapons of mass destruction that were the basis of the Iraq war were never found, spawning a cottage industry of books about his presidency, including The Lies of George W. Bush, and the Big Bush Lies (“I'd tell you that I'd read them, but that would be a lie,” Bush joked several years ago.)

Scales said a drawdown of troops would not necessarily be inconsistent with Bush's rhetoric, offering a preview of what the White House might say if it takes such action.

“I don't regard him ever saying he won't withdraw troops. What he's said is he won't just (completely) withdraw from Iraq,” Scales said.

Yet there is also evidence that Bush feels little compunction to tell the truth if he believes a purpose is served by not doing so.

In early November, even as he sought a replacement for Rumsfeld, Bush said he had full confidence in his secretary of defense and planned to retain him through the end of his presidency.

As he announced Rumsfeld's departure at a news conference several days later, Bush said he had lied because “I didn't want to inject a major decision about this war in the final days of a campaign.”

“And so the only way to answer that question and to get you on to another question was to give you that answer,” Bush said with a laugh.

Gee, thanks, Emanuel. That was very helpful. And which supposed Gore lie did you have in mind? Or can't you think of one?

And would you like to try the even more challenging job of defending the current president? That's a toughie!

Emanuel Goldstein, I second Zeno's request that you provide some evidence to support your claim. Otherwise, your claim degenerates into name calling, which, I'm sure, is not what you intend.