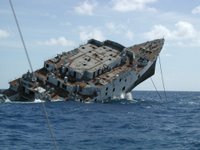 The end of the fall semester brought one student's academic quest to a successful conclusion. At least, that's how she sees it. Looking at it from a teacher's perspective, I see it differently.

The student in question came to my attention early in the semester, as I recounted in a previous post. She was remarkably untroubled by the F she had earned on the first chapter test. Her score on that exam was an extraordinary 7%, but she told me that she had no plans to change her approach. True to her word, she stayed the course as firmly as any national leader you might think of, racking up subsequent chapter test scores of 0% (she missed it), 12%, and 4%. My student was impervious to suggestions and oblivious to any notes I wrote on her papers, yet she came to class regularly (although she never seemed to be paying much attention).

Finals week was, at last, the occasion when I got to have another talk with her—only our second conversation, the first having occurred after her first disastrous exam. Her inattention had tripped her up, and she came to our classroom at the wrong time for our final. (Class hours are always thrown into chaos by our final exam schedule.) Since I happened to be there, tending to a different class, she asked me about the final exam for our own class. I told her that it was later in the day, that she should come back if she wanted to take it, but that she was free to skip it, since there was no possibility of her earning a passing grade for the class (her final exam “target score” for a C in the class was over 400%, which seemed a tad unlikely).

I took the opportunity to ask her why she had persisted throughout the semester in spending time on a class she was clearly not going to earn credit for.

So that was it. As someone had previously suggested to me, my student was just doing it to collect her financial aid. Such aid is not particularly generous at our community college, so I marveled that anyone would consider it a reasonable means for cobbling together a subsistence existence. I asked her why she had chosen our particular course in business math.

“It's my counselors. They keep giving me bad advice. They keep getting me into classes that I don't need. I've had lots of math classes. I'm all mathed out. I have other courses.”

“Okay, but it's too bad you didn't take something that you could actually use. Your attendance was good, but it didn't advance your education.”

But our interview was over. I could tell, because she turned on her heel and left.

Later in the morning, she was back for our final exam. She doodled on the pages for a few minutes, turned it in, and left. There's nothing there worth grading. I'm sure her only reason for attending the final was to protect her enrollment status from an instructor-initiated drop. She must not know that the deadline for that was weeks ago. At this point, I have to assign her a grade rather than striking her from my roster.

It will be the most thoroughly earned F of my teaching career.
Posted by Zeno at 10:00 PM

Weird. Here at UMM, if the GPA drops below 2.0 for a semester, the student is put on probation and has to make a special plea to maintain financial aid. If it's that low for two semesters, they get the boom dropped on them.

The strategy of your student wouldn't work at all here.

Weird indeed. We do have an academic probation system that limits student enrollment or eligibility for financial aid, so I'm guessing my easy-riding math student must have had passing grades in other courses. But I'm not privy to her academic record, so I don't know the degree to which she was gaming the system. In a couple of decades at my school, it was the most extreme example I have ever seen.

P.S.: By the way, credit where it's due: eProf2 was the first to tell me he suspected a financial aid scam.

Wow, that's weird. I have seen students here try to deliberately get an F but for different reasons. Here, if students think they are failing, they will go for an F rather than a D because if you get a D it stays on your transcript but if you get an F, you can retake the course and your higher grade will replace the F. Of course, it seems to be mainly wishful thinking that the higher grade is going to materialize the second time the student takes the course ....

The place where I used to teach had the same policy as Jo(e)'s, so I'd occasionally have students come to my office at the beginning of the new semester asking if I could change their D to an F. After refusing to do so, I usually had a hard time explaining to them that there's no "less than or equal to" option with the grade you've earned.

Mathed out and grammered up...

That is one of the most weird things I've read in a loooong while.

Round here, you get your financial aid yanked if you flunk.