Speaking colloquially, I have always regarded Richard Dawkins as on the side of the angels. That is, Dawkins is one of the good guys. He has no patience with the god-pushers and he smites creationists hip and thigh. Dawkins famously faced off with the now-disgraced Ted Haggard, the evangelical pastor who upbraided Dawkins for his “arrogance.” Even some secularists wish Dawkins would back off a bit and try to be more diplomatic as he explains to the faithful that their most cherished beliefs are mere stuff and nonsense. A tall order, certainly.

Now comes Ken Ham, however, with a stirring endorsement of one of Dawkins's key points. Ham is a well-known proponent of the all-or-nothing approach to the Bible. No compromises! Fundamentalists of the jot-and-tittle school of biblical exegesis insist on believing everything in the pages of scripture as literally as possible. In his lead editorial in Answers Update (Volume 13, Issue 11), Ham cites Dawkins while attacking fellow Christians for their willingness to compromise.

One of the leading evolutionary spokespersons of our age is Dr. Richard Dawkins of Oxford University in England.

In his new book The God Delusion Dawkins clenches both fists and attempts to “take on” the God of the universe!

The publisher's blurb on the cover of the book states:

Dawkins attacks God in all his forms, from the sex-obsessed, cruel tyrant of the Old Testament to the more benign, but still illogical, Celestial Watchmaker favoured by some Enlightenment thinkers.

He eviscerates the major arguments for religion and demonstrates the ultimate improbability of a supreme being. He shows how religion fuels war, foments bigotry and abuses children.

I will bring just one of Dawkins many points to your attention. Taken from chapter seven, the self-proclaimed atheist mocks the hypocrisy of compromising Christian theologians:

The legend of the animals going into the ark two by two is charming, but the moral of the story of Noah is appalling. God took a dim view of humans, so he (with the exception of one family) drowned the lot of them including children and also, for good measure, the rest of the (presumably blameless) animals as well.

Of course, irritated theologians will protest that we don't take the book of Genesis literally any more. But that is my whole point! We pick and choose which bits of scripture to believe, which bits to write off as symbols or allegories.

Such picking and choosing is a matter of personal decision, just as much, or as little, as the atheist's decision to follow this moral precept or that was [also] a personal decision, without an absolute foundation. If one of these is 'morality flying by the seat of its pants', so is the other [emphasis added].

At least Dawkins is being consistent. He recognizes that his own “morality”—which is based on his atheism—is relative! And he points out correctly: if theologians “pick and choose which bits of scripture to believe,” then they too are actually saying that truth is relative … to be decided by humans!

So Ken Ham and Richard Dawkins agree on a key point: Biblical faith is a seamless garment. It is made of whole cloth. If you unravel one corner, its entire fabric will fall apart into a tangle of loose thread. Of course, they disagree as to whether this outcome is desirable. 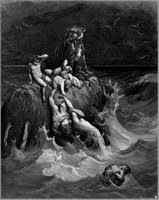 Ham's dismay, as you may have noticed, is limited to lamenting the fragility of the all-or-nothing belief structure. He says nothing—absolutely nothing—about Dawkins's point concerning the mass-murderer God who ordained Noah's flood. What manner of Christian thinks it's all right for the deity to drown untold numbers of small children because he disapproved of their parents? It's on a par with the doctrine of infant damnation. Perhaps Ham neglects to answer Dawkins's charge because the supposed “sin nature” of humanity is too lame an excuse. Everyone deserves death, you know, because of that Adam and Eve business in Eden.

Rather than dwelling on such unpleasantness, Ham jumps to an attack on the notion of an old earth:

For all our 12 years, Answers in Genesis has been calling out to those Christian leaders who compromise the clear teaching of Genesis by accepting the secular idea of millions of years and evolution.

Such compromise undermines people's acceptance of the authority of the Word of God. The very people these Christian leaders influence—both the “ordinary” church attenders and the leaders who teach and govern within the local body—soon join their pastors in believing that you can insert man's fallible ideas and reinterpret the clear meaning (the “hermanuetic” [sic]) of Scripture. This has put many youth and adults on a slippery side—with tens of millions eventually rejecting the Bible as the Word of God. And friend, that's not just opinion. Keep reading!

A few days ago I was given an initial overview of a major national poll that was commissioned by AiG (as a follow-up to the results of an alarming Barna Research poll of 2002 and a Southern Baptist poll of around the same time). The AiG-commissioned poll (conducted by one of America's leading researchers) clearly shows that a major reason many have left the church is because they no longer believe the Bible is the absolute Word of God.

(We will share other deeply alarming findings over the next few months.)

By the way; such compromise positions in the church are seen by many—inside and outside the church—as sheer hypocrisy. They hear Christian leaders say that the Bible is infallible, but they watch as those same Christian leaders “pick and choose” which bits (particularly in Genesis) are to be accepted as written.

Can I urge you to pray for Richard Dawkins? God is long-suffering—as He was in the days of Noah. He is “not willing that any should perish, but that all should come to repentance” (2 Peter 3:9).

Also, please pray for compromising church leaders—that they will accept and proclaim the authority of God's Word, from the very first verse.

Ham and Dawkins agree that fundamentalist Christianity is undermined by acceptance of the scientific proofs of the age of the earth and the evolution of life upon it. Ham is therefore correct, from his point of view, to decry the creations of Richard Dawkins, books like The Blind Watchmaker, The Ancestor's Tale, and, more recently, The God Delusion.

Dawkins looked upon his handiwork and saw that it was good. Too bad that the creationists keep us from resting on the seventh day.
Posted by Zeno at 9:30 AM

Dawkins is an anti semitic bigot who blames the Jews for their own suffering because they opposed "marrying out".

Is is an elitist member of the establishment whose interest is in maintaining the domination of his group, not in truth.

Emanuel Goldstein, I've read your comments to Zeno's postings with a great deal of interest.

I notice, however, that you do not cite evidence to support your assertions. Perhaps there is little?

I've read a number of books that look to the Jews own sense of isolationism as a cause of their being pickup upon. The thinking goes that the Jews wanted to maintain their cultural identity among a sea of polytheistic pagans around them, so they tended to cluster among themselves and not intermarry. This made them easy targets for scapegoating later on. Of course, no anti-semetic oppressor throughout history writes in his journal, "because the Jews tend to stick to themselves due to their cultural predispositions, I will blame the recent famine on them to distract my subjects," so this remains conjecture.

However, identifying a historical chain of events is not the same as blaming everything on a single, innocuous root cause. Take for example the case of a woman who dresses skankily and gets raped. She probably has her own reasons for dressing like that (maybe she's trying to attract the attention of someone, or piss off her parents, or just feels better being sexy). There is nothing to dressing like that that ethically allows rape, and she should never be blamed for it. It is always the raper's fault. But it is also not bigotted to point out that she's made herself a more visible target.

King Aardvark, you seem to be clarifying Dawkins's position and countering emanuel goldstein's. Is that a fair assessment?