This day, December 20, 2006, marks the tenth anniversary of Carl Sagan's death. We've been without him for a full decade now, and his absence gravely weakened the ranks of those willing to fight for the cause of science and sanity.

We are fortunate, however, to have so much of Sagan's intelligent advocacy of rational thought in his written and electronic legacy. Therefore, instead of merely commemorating a sad anniversary, it is appropriate that we celebrate his life as one of the great figures in the intellectual life of the twentieth century.

A Carl Sagan memorial blog-a-thon has been sparked by the efforts of Joel Schlosberg at Joel's Humanistic Blog. Go visit Joel's blog for links to the blog-a-thon participants. I've already posted the story of my meeting with Carl Sagan (The Unknown Sagan) and am looking forward to reading the many other tributes that have been posted elsewhere. A wonderful collection of Sagan anecdotes and memorabilia is rapidly growing at the Celebrating Sagan site, which is definitely worth a leisurely visit. Carl's son Nick has a blog of his own, complete with cherished memories of his father; check it out at the eponymous Nick Sagan.

The latest issue (January/February 2007) of the Skeptical Inquirer just came out, featuring Sagan on its cover and containing a lengthy tribute by David Morrison, Sagan's student and colleague. Don't miss it! 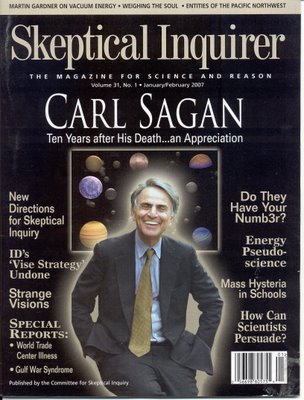