An earlier model of Ford

Gerald Ford ended his life widely viewed as an affable, inoffensive gentleman. His peculiar political career included more than two years as the country's only unelected president (if you don't count George W. Bush's first term). He succeeded to the highest office in the land by appointment, stepping over the political corpses of Vice President Spiro T. Agnew and President Richard Nixon, who had named him as Agnew's successor (and, ultimately, his own). Ford quickly demonstrated that Richard Nixon had not entirely lost his touch: he promptly issued a presidential pardon to his predecessor, saving Nixon from the likelihood of conviction and imprisonment for criminal activities.

I never quite warmed to Gerald Ford, although it was a relief to have him as chief executive after Nixon's nonstop abuse of presidential authority. I could not forget that Ford had always been a convenient tool in the hands of the GOP power structure. He was the minority leader in the U.S. House of Representatives when Nixon tapped him in 1973 to fill the office of vice president after Agnew's resignation and nolo contendere plea on bribery charges. As minority leader during the years of Lyndon Johnson's presidency, Ford had joined with his opposite number in the U.S. Senate, Everett Dirksen, in hectoring LBJ via the “Ev and Jerry” show, a string of press conferences devoted to decrying government spending and intrusive federal policies. (You don't hear Republicans talk about that too much these days.) 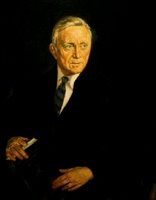 When Nixon followed Johnson in the White House, Ford continued his work as a party stalwart by focusing on the new administration's enemies. (Back then, we didn't know that Nixon had compiled an actual “enemies list.”) Nixon had had difficulty placing his own nominees on the Supreme Court, which was frustrating his efforts to make the judiciary more amenable to his goals. The minority leader dutifully led a charge against the senior member of the Supreme Court, Associate Justice William O. Douglas, a liberal jurist whose positions were diametrically opposed to Nixon's agenda. Gerry Ford blasted Douglas as a disgrace to the high court and demanded his impeachment.

The grounds for Ford's demand were fanciful, to say the least. He accused Douglas of being liberal; while true enough, that was not grounds for impeachment (and Rush Limbaugh was not yet around to argue that liberalism is a crime in and of itself). Ford said that Douglas was soft on obscenity because he declined to allow banning or censorship of salacious films (I am Curious (Yellow) was a softcore import from Sweden that was much in the news at that time). The House minority leader added that Douglas had dared to publish an article in Evergreen magazine, a publication that includes photographs of naked women. In one infamous incident, Ford irately waved about a copy of the magazine while television cameras were covering his congressional hearing. In a move that would foreshadow Ford's future reputation for physical clumsiness, he let the magazine flop open, displaying a nude pin-up to the cameras. That footage didn't make it to the evening news broadcasts.

Ford's accusations were weak, but he perfectly expressed the notion of brute-force politics (later exemplified in the GOP congresses of 1995-2007) when he replied to a request for a definition of impeachable offense: “The only honest answer is whatever a majority of the House of Representatives considers it to be at a given moment in history.” The move to impeach Douglas fell flat on its face, but it may well be that Nixon felt it was a mission accomplished. The president had put the people on notice that he had the means to strike out at his rivals and opponents. Ford was his willing tool.

Later, as the 38th president of the United States, Gerald Ford experienced the ultimate in irony. William O. Douglas, old and infirm, submitted his resignation from the Supreme Court in 1975. President Ford was thus handed the opportunity to name the replacement for the target of his impeachment attack.

But the ironical nature of the story of Ford versus Douglas does not end with that peculiar development. There's one more curious twist worth our consideration: Ford's choice for Douglas's successor was John Paul Stevens. Today, Justice Stevens is widely viewed as one of the most liberal members of the U.S. Supreme Court.

Perhaps Gerald Ford didn't work out as badly as president as I feared he would.
Posted by Zeno at 11:30 PM

Is there some way we can revoke Ford's pardon, posthumously try and convict Nixon, and then dig up his corpse and have it battle Codpiece Accomplished in a cage match? Hey, Shrub almost lost a fight to the death against a pretzel; Nixon's corpse might just finish the job.

I'm not sure about that. Do we really want a Brain-Eating Nixon Zombie? Comparisons of politicians to Nixon are already in the air, after all. Maybe the Hitler effect is no danger, though, since the current holder of the office is being compared unfavorably to Nixon.

Back on topic, "Perhaps Gerald Ford didn't work out as badly as president as I feared he would." Or, perhaps, so badly as he wanted to?

You have taken one of my favorite stories about my political hero, William O. Douglas, and brought it to life again. Thank you.

I'm back home again and out of the business of being a rent-a-dean after three months on the job. It was fun being back on a campus again with students and faculty.

Did you complete the statistics enrollment versus college algebra eligible study? What were the results?

Happy New Year to you.