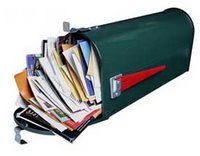 Spare me your campaign ads

Mom brandished a sheaf of political fliers at me. Several were from her local representative in the state assembly.

“These make me so mad! I have had it with these!”

“It's an election, Mom. If you don't want them, toss them out.” Somewhere along the line, I seem to have become the calming voice of sweet reason, but Mom was having none of this.

I see that. Both my parents spend an inordinate amount of time complaining about trivia. I guess that's harmless enough, but it makes for tiresome conversations. Besides, it was weeks after the election. Did my mother save up all those fliers just so she could whine to me about it the next time I visited? Apparently. She does have a sense for the dramatic.

“You live in a marginal district, Mom. The assemblywoman is just doing what it takes to hang on to her seat. And it certainly worked.”

Yeah, like that was going to happen. Like my parents would vote for a Democratic woman who wasn't to the right of Ann Coulter. I recalled my resolution to be gracious in victory—great big glorious tub-thumping victory.

“She wasn't targeting you, Mom. She was aiming at the persuadable swing vote and it was quite successful. Good for her.” Oops. That last bit almost sounded like gloating.

Every year I have exactly the same reaction to political advertisements in the mail and on television and radio. They aren't aimed at me. I'm not a swing vote. With exceedingly rare exceptions, I know in advance how I will vote on any particular political race. In my mind are clear positions and preferences that enable me to determine almost immediately whether I favor a given candidate or proposition. Swing voters therefore intrigue me: How does it feel to float around in the indeterminate middle? How does it feel for your election decision to be subject to reports of a candidate's flubbed joke or some momentary gaffe—real or otherwise?

I admit that a snap judgment may not always be my final judgment. For example, there was a proposition on the California ballot last month that dealt with eminent domain. After the Kelo decision, in which the U.S. Supreme Court ruled that eminent domain could be applied more broadly and more creatively than had previously been the case, several states enacted measures to limit Kelo's impact. The California initiative, however, was a Trojan horse, offering restrictions on eminent domain as a means of sneaking into law a list of right-wing pipe dreams about property rights and compensation for “takings,” the goal of which was to cripple the public sector. At first blush, the initiative looked like a reasonable response to Kelo, but it was easy for me to discover its real import by reading the pros and cons in the election handbook.

Does that mean I'm one of the persuadables after all? Only in a narrow sense. My information did not come from political fliers or ads in the electronic media. I almost wholly discount those. When I need to know more about an issue, I like to go to trusted sources of information, such as groups who have been in tune with my preferences in the past. Today, of course, several of these sources are on-line.

So the more overt aspects of political campaigns wash over me with minimal impact. Huge amounts of money are being spent on things that will hardly affect me at all. I do watch election spots with some interest, though mostly for amusement's sake. Those ads aren't for me. They're not for Mom.

I don't know anything about these groups, but one could conjecture that they are the locus of the swing voters.