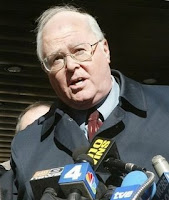 It's really embarrassing when they make it so easy, but that's not a reason to spare them. Today's e-mail brings one of Bill Donohue's hectoring messages from the Catholic League for Religious and Civil Rights (or Donohue's Drop-of-a-Hat Rant Machine, if truth-in-labeling laws applied). As usual, Bill is going hammer and tongs after the enemies (real and imagined) of Catholicism without ever suspecting that he is himself one of Rome's festering boils. If so mean-spirited and nasty a man as Donohue can prop himself up as a spokesman for Roman Catholic values, just how hollow must the Church be? During a rant about the supposed war on Christmas, Donohue famously referred to the putative founder of his church by saying “I've never met him.”

No wonder he never turns the other cheek.

In his latest electronic missive, Donohue waxes indignant over historical mistakes in a movie based on Dan Brown's Angels and Demons. Apparently Brown's work of fiction (it's fiction, Bill!) takes liberties with the historical record by pretending that the Illuminati have harbored a grudge against the Catholic Church since the days of Galileo's persecution for his defense of heliocentricity. Since the Illuminati were actually founded more than a hundred years too late to be involved in the Galileo affair, Brown's plot device is a historical solecism. It's shocking, of course, that a fiction writer would do such a thing and that a major movie studio would permit history to be similarly distorted in the movie version.

The tag team of Dan Brown and Ron Howard would have the public believe that Galileo was a member of a secret society, the Illuminati, and that the group seeks revenge against the Vatican today because of the Catholic Church’s anti-science history. All of which is nonsense.

Clearly Dan Brown and Ron Howard are in league with the devil. Or something like that.

So why do they lie? Because their goal is to paint the Catholic Church as the enemy of science, and what better poster boy to trot out than their favorite martyr, Galileo? The ultimate victim, Galileo’s alleged persecution is cited as proof of the Church’s war on reason.

Is that what Brown and Howard are doing, unfairly depicting the Church as reason's enemy?

The record clearly demonstrates that the Roman Catholic Church is not exactly reason's best friend. It makes a fetish of fecundity, thinks a fertilized egg is already a human being, and recoils in horror at the specter of pregnancy prevention. While Rome is not as brain-dead over evolution as many Protestant sects, it cannot help but make goo-goo eyes at the intelligent design crowd. The Church regards science with suspicion.

But Donohue is adamant:

He's right, of course. Science flourished in Europe (especially during that Enlightenment period in which God was shunted aside as a historical curiosity) and Europeans might not like to be reminded of the role of Muslim intellectuals in preserving the works of Greek scholars during the Dark Ages (thus making it possible for them to be rediscovered during the Renaissance) and adding their own contributions. (Perhaps Bill has never heard that algebra and algorithm are based, respectively, on al-jabr and Al-Khwarizmi. And does he know why the title of Ptolemy's Almagest is in Arabic, although it was originally written in Greek?)

Despite what Donohue thinks (or merely feels), Brown and Howard are not conspirators against the Catholic Church. They traffic in entertainment, the former in vapid bestselling novels and the latter in blockbuster movies. Their thrillers need bad guys. Brown has tapped into a lucrative vein in this period of popularity for New Age nonsense and mysticism. And when it comes to religion-themed mysteries, who better to set up as the heavy than the 800-pound gorilla known as the Vatican? Or—to be less kind—who better to set up as the villain than a 2000-year-old mystery cult which has lost its moral authority with the recent exposure of decades of profound corruption?

It's not as though Nazis (already used Raiders of the Lost Ark) or communists (exploited in dozens of Bond movies) or drug cartels (defeated by Harrison Ford as Jack Ryan) or international terrorists (blah, blah, blah, Jack Bauer) are the right bad guys for a modern religion-based novel. What, the Mormons? Jehovah's Witnesses? You've got to be kidding! The Catholic Church can rest assured of its primacy.

Donohue offers this parting shot, still irked at the mention of Galileo as an example of the Vatican's excesses:

Galileo was never imprisoned or tortured. His confinement to house arrest, though unwarranted, was more a function of his arrogance than his ideas: he persisted in presenting his ideas (taken from Copernicus, a Catholic scientist who was never punished) as scientifically accurate, something which scientists of his day scoffed at.

Nice one, Bill! There's nothing like a humorous exit line to leave your audience in a good mood. If you didn't catch it—Bill is being uncharacteristically subtle here—perhaps it will help if I mention that Copernicus withheld publication of his earth-shattering book, De revolutionibus, until he was lingering on his death bed. The Church placed De revolutionibus on its Index of Forbidden Books, but it never punished Copernicus. He was dead. 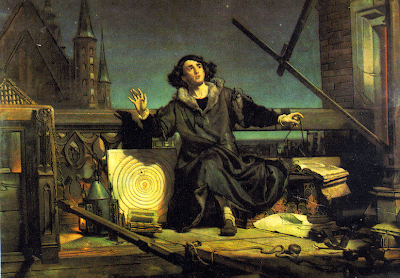 Donohue and Rush. The next four (eight? twelve?) years are gonna be fun, in a kind of masochistic way.

One does wonder how he knows enough about Copernicus to know he was Catholic (or did he just say that figuring it was true, because virtually everyone in mainland Europe west of the Ukraine was in those days?) but failed to realise he withheld publication of his findings until after his death (thereby avoiding punishment... at least Earthly punishment. Who knows what happened to Copernicus after he died?). I don't understand how a man as large and angry as Bill Donohue still has a functioning circulatory system.

To be fair, the CC has a precedence to digging up corpses and putting them on trial.

"After all, science did not take root in South America"

Of course SA stopped doing much science around 1500, yes. I do wonder why. Hmmmmm ...

I'm afraid you haven't got it quite right about Copernicus: he wasn't Indexed for quite a long time.

It's true that he held off publishing till the end of his life; and when the book came out, it had a preface inserted by a busybody -- a Protestant busybody! -- insisting that he didn't really mean it. But the whole theory, while it quite annoyed some people, never got hot as a controversy for another 60 years.

After 1610 things got hot. That is, at just the time that a bunch of starry messengers brought the news that the old astronomy was a crock. Coincidence? You decide.

So it was in 1616, after Galileo's failed attempt to talk sense to the Church -- citing Saint Augustine, of course -- that the crackdown came. Copernicus' book wasn't Indexed even then: just temporarily withdrawn from circulation, ha ha, till it could be edited to remove various doubtful passages which seemed to give the impression that Copernicus really thought he was speaking the truth.

In fact, those changes got made after some years, and Copernicus could circulate for a while. But it was downhill from there, to the time (1633) when everything Galileo ever wrote was banned, along with everything he ever would write in the future! (They were lax in enforcing that last bit. Wow, aren't you impressed with their tolerance?)

I'll try to shut up soon, but this stuff echoed down the years. A hundred years later, the Church decided to allow publication of Galileo's work -- but bowdlerized to remove the passages that seemed to indicate that he believed what he was saying! Which is tragedy here, and which farce?

Hand it to the Fundies: So far as I know, they've never come up with a theory that Darwin didn't really believe what he was saying.

Speaking of Creationism, another farce: Sir Philip Gosse, the 19th-century naturalist who wrote a book about how God created the world in 4004 BC complete with the extensive evidence for evolution. The funny bit here is that that's pretty much the idea that Pope Urban VIII ordered Galileo to put in his book in 1632: after all, God could put the Universe together in any way He pleased, and make it look any way He pleased.

Thanks, Porlock, for filling in the historical background. I guess Copernicus and his book got a few years to "rest in peace" before the unpleasantness happened.

Porlock, unfortunately there is a version of the "Darwin didn't mean it"... have you not heard the "Darwin recanted his theory on his death bed" story?

@Mozglubov
Got me!
I guess there is nothing new under the Sun. Next thing you know, there will be races not going to the swift.