It only looked progressive

The breakthrough that wasn't

James Flournoy is dead. I was a little surprised to learn that he had still been alive. The former Republican candidate for statewide office in California reached the age of 93 before passing away. Tributes poured in from all quarters, including the warm words of erstwhile rival Jerry Brown, who was quoted in the Los Angeles Times as saying, “He was a wonderful man and a true gentleman.”

I will not quibble. No one had a harsh word to say about Mr. Flournoy and I think it likely he was exactly the even-tempered and delightful man portrayed in the news reports of his death. However, there is less to the James Flournoy story than meets the eye, although press accounts would seem to argue otherwise. Here is what Jon Thurber says about him in the Los Angeles Times:

James Flournoy, the Republican candidate for California secretary of state in 1970 who was the first African American nominated by either major party for a partisan statewide office, has died. He was 93....

Flournoy, a prominent lawyer in Los Angeles for decades, was one of the few black politicians in the GOP at the time.

However, no one bothered to provide the context for Flournoy's campaigns—a context that saps the man's political career of much of its pioneering significance, for all that Flournoy himself was a gracious and accomplished man. 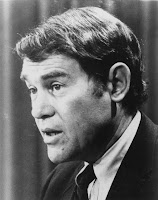 You see, Flournoy's nomination for statewide office on the Republican ticket was a fluke, even though it happened twice. It was not a sign of enlightenment and progressive values in the state Republican Party. In 1970, when Flournoy threw his hat in the ring for the job of secretary of state, his most significant asset was his name. The incumbent state controller was Houston Flournoy, one of the most well-regarded and popular elected officials in California. Although James and Houston were not related, they shared an usual last name. People who liked the state controller were happy enough to pull the lever for another Flournoy for secretary of state (or perhaps they even thought it was the same Flournoy).

The Democratic candidate for secretary of state that year was Jerry Brown. In all fairness, the same thing could be said of Brown that I just said of James Flournoy: His greatest asset was his name. Edmund G. “Jerry” Brown, Jr., was the son of Edmund G. “Pat” Brown, the former two-term governor of California who would always be famous for defeating Richard Nixon in 1962 (and sparking Nixon's infamous “last press conference”). Jerry Brown rode his famous name into the secretary of state's office and used that platform to prepare for a later successful campaign for governor. 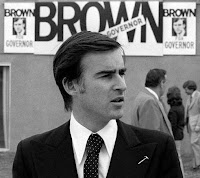 Jerry Brown's rival in the 1974 gubernatorial contest was Republican Houston Flournoy, vacating his position as state controller to take a shot at higher office. While Jerry and Houston were squaring away against each other, who made a run at the state controller's office? None other than James Flournoy, this time going after the office being vacated by the other Flournoy. It didn't work that time, possibly because Houston Flournoy's profile was even higher as a result of his campaign for governor and James Flournoy was now known as the guy who had lost to Brown in 1970. Another Republican got the nomination that year.

Not one to give up, James Flournoy took a second crack at the controller's job in 1982, this time winning the Republican nomination in a year when no one felt there was any chance of knocking off the Democratic incumbent. Flournoy was buried in a landslide, losing by over 1.5 million votes in the November 1982 general election. It was the end of a political career that never really went anywhere, but gave California's Republican Party the unlooked-for distinction of being the first major political party to nominate an African American for statewide office. But it wasn't anything more than pure political opportunism by the GOP leaders who thought they might be able to parlay the coincidence of Flournoy's last name into an upset victory. And James Flournoy, nice guy that he was, didn't object to taking a chance that lightning might strike.

By an interesting coincidence, back in 1970, while James Flournoy was writing a footnote to California's political history as the first black man to win a statewide nomination from a major party, someone else was preparing to become the first black man ever elected to statewide office. It was in the contest for the nonpartisan position of state Superintendent of Public Instruction. Although the candidates in that race lacked official party labels, everyone knew that incumbent Max Rafferty was the Republican (he had previously run as the GOP's candidate for U.S. Senate) and challenger Wilson Riles was the Democrat. The state Republican Party backed Rafferty for re-election while carefully averting their gaze from Rafferty's deliberately race-baiting campaign.

Sure, they might have had James Flournoy on their ticket as their candidate for secretary of state, but all was fair in love and politics. Right?
Posted by Zeno at 9:00 PM