Pi in the sky 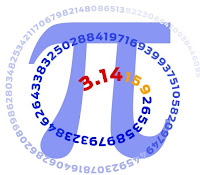 I've always suspected that I was one of God's favorites. Even decades of disbelief have failed to dislodge that suspicion from its perch deep within my psyche. Of course, it needn't be “God” in whose favor I bask. Perhaps the universe just likes me. At least, that's what the weight of the evidence suggests. Things usually go right for me.

March 14 is duly celebrated each year as Pi Day, as well it should. Special festivities are conducted at precisely 1:59 in honor of the transcendental number whose decimal expansion begins with 3.14159. True devotees choose 1:59 in the morning for their rites (and they're usually still up anyway, since staying up late is a common trait among nerds and math geeks). Less hardy pi celebrants settle for 1:59 in the afternoon, although true believers may dismiss them as heretics for choosing the doctrinally unsound 13:59.

It was in the digits of pi that I discovered incontrovertible evidence of God's favor. It occurred at position 100,518,702, counting the digits beginning with the 1 after the decimal point. To my surprise, there was the string 72739070. Perhaps it doesn't mean much to you, but it easily parses into a string of decimal ASCII codes:

If, for some reason, you have forgotten your American Standard Code for Information Interchange (or, more forgivably, you memorized only the hex equivalents), then you may be puzzled. Eventually, though, you should figure out that pi is spelling out the letters HIZF. This string undeniably stands for “Hi, Zeno Ferox!” There's nothing else it could possibly be. (I reject out of hand the silly notion that it could possibly involve Zermelo-Fraenkel in some way, a suggestion that is the epitome of absurdity.)

No, it is clearly and self-evidently a personal greeting to yours truly. And let's not ignore the fact that God (or whatever) chose to use the initials of my blogging pseudonym, just to make it more convenient for me to brag about it without exposing my true identity. Like the horse shoe that is lucky even if you don't believe in it, God is polite even when you don't believe in him. It's a win-win situation.

Thanks to the Science Punk for bringing to my attention this musical celebration of pi. The guys in pointy hats have perfectly captured the cadences of my typical lecture style!

Of course it can't be Zermelo-Fraenkel. That would imply that C was false.

Funny - I'm so used to thinking of you as Zeno, that I hadn't even stopped to consider that that might not be your name proper.

wv: enandies - the mirror image of of the Andes?

I would submit that it is not Pi day rather Pi moment. there must be a moment that exactly matches Pi. We can bound this moment, even if we do not know its exact time.

Or does it even have an exact time? Even though it is known to occur with a definite time window? Uhmmm?

I've heard the "women singing numbers" part of that song used in a techno piece, and now I'm trying to remember what techno piece that was, and whether (when I heard it the first time) I realised it was digits of pi...

But there is no April 31. We just have to aproximate it with July 22nd

How did you ever find those sequences?

William, just click on "digits of pi" in the third paragraph. The link takes you to a pi searcher!