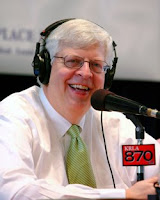 It's a pity that he is going to hell because he denies Jesus, but Dennis Prager is still one of my mother's favorite talk show hosts. His conservatism is of a more high-toned nature than that of the general crowd and thus appeals to my mother's gentility. (I swear that's not a pun on “gentile”; it just came out that way.)

Anyway, Prager lacks Limbaugh's overt nastiness and misogyny while still being very conservative, so my mother finds him simpatico. I check out his program every so often to see what the polite right-wingers are talking about these days (and to learn what Mom is listening to). He has some skill at sounding reasonable, but it's mostly just a lower-decibel version of the same right-wing cant.

Prager recently aired a debate with Christopher Hitchens, part of which I heard. Prager trotted out one of his favorite “proofs” that religion is both normative and desirable. Perhaps you know it. Prager asks you to suppose that you encounter ten men coming out of a dark alley. Scary! But wouldn't you be relieved to know that they were coming from a Bible study class?

That proves Bible study is good, I guess. Or that people who study the Bible are good (as long as they don't take too seriously all those passages about stoning people). Or, at least, they aren't likely to be muggers.

Well, neither are people who just came from a PTA meeting, or a night class, or a computer club. Hitchens said he'd rather they came from a seminar on Tom Paine, the irreligious author of Common Sense. Prager and Hitchens agreed that that would be unlikely, but only Hitchens seemed to regret that fact.

Prager's parable is a low bar for establishing the significance of religion, isn't it? He commented on his favorite gambit in his Townhall column, saying, “I have always specified ‘Bible class’ because I assume that in America, anyone with common sense would in fact be very relieved if they knew that the 10 strangers, all men, approaching them in a dark alley were committed to either Judaism or Christianity and studying the Bible.” For some reason, Prager was at pains to exclude non-Judeo-Christian creeds from his roster of goodness. I imagine it would deflate the point he was trying to make. The United States is a (Judeo)Christian nation, you know. “I therefore pose this question to make the rather obvious point that nearly all of us instinctively assume some positive things about normative Judaism and Christianity in America.”

Prager revised his scenario for a show in which he discussed the definition of marriage. Once again, the listener is asked to imagine being approached by a group of unknown individuals. Wouldn't you be worried if it was all guys? Wouldn't you be relieved if it turned out to be a collection of heterosexual married couples walking hand in hand? (I think the hand in hand part is crucial.)

For me, personally, I think the degree of relief would depend on the amount of body art and the fraction of Ace Hardware's inventory dangling from piercings, but perhaps that's just me. We could ask Dennis. He certainly appears to think that Proposition 8 makes us safer at night in California. 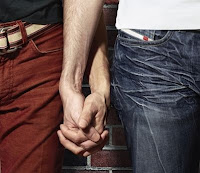 But as far as relief is concerned, I'm sure I would be just as much at ease if the approaching group consisted of hand-in-hand gay couples. Gay boys out on the town are not likely to be muggers. What have we to fear? Well, in my case, perhaps some trenchant observations about my complete lack of style sense or fashion knowledge. (I'm sure that Prager understands that all gay boys are obsessed with appearances and superficialities.) It would, however, be mostly harmless.

Is Prager mostly harmless? I wonder.
Posted by Zeno at 7:30 PM

I would also contend that Prager's scenario of the group of ten guys coming home from a bible class wouldn't be all that reassuring if one *was* the gay couple.

Or if the 10 returning home from a bible study class were members of the Westboro Baptist Church. Or a white-supremacist church.

That's two groups exeunt of bible study I would definitely not like to meet in a dark alley (though I'd be less afraid for my physical well-being in regards to the WBC group; more of a gag-reflex thing with them).

Zeno, great posts - you're writing is terrific to read, insightful, cogent, well-crafted, thought provoking. Found my way here via your posts at Pharyngula. Thanks for your work.

A few months ago I came across a group of guys having a bible study at a secluded picnic table near our neighborhood playground. They were creepy the way they kept looking over at the kids.

I've also had missionaries look at the "no preaching" placard in my window and then spend time looking in that same window to watch my young daughter play on the rug.

To answer Prager in a more practical way, knowing that the group was coming from a bible study would lead me to cross the street. In my experience, groups of people leaving church functions don't bother to share a sidewalk with anyone else.

Especially the all-male ones in dark alleys.

The potential danger posed by the ten men coming out of a dark alley is of course that they are thugs who may relieve you of your wallet and/or your life. So yes, in general Bible study attendees are preferable to thugs. The parable obscures the fact that thugs serve as the implicit comparator group. A "low bar" indeed.

If those 10 men were part of the ultra conservative Slavic churches that are populating the west coast and are homophobic to the point of beating up people they even suspect are gay, I would run the other way, and I'm happily heterosexual.

Far too many people who go to bible study are on the fringe of the lunatics.