Did I do that?

The pine cone was lying the middle of the path. Without slackening my pace, I gave the cone a sharp kick when I reached it, pitching it to the side. I was now a hero, having spared some future pedestrian or biker a nasty—perhaps even fatal—fall through the agency of a pine cone in the wrong place at the wrong time.

But then a thought crossed my mind and broke my stride. What if I had done the wrong thing? For example, suppose a young woman should come strolling along behind me. Suppose a biker should come pedaling furiously down the path. The stroller would step off the path to give him (and herself) the safety of a wide berth. But then, by mischance, as she steps off the path, her foot comes down on the pine cone I had thoughtlessly kicked there. It rolls out from under her and spills her directly into the biker's path. The resulting impact cripples her for life and the biker goes sailing through the air, breaking his neck when he hits the ground and dying instantly. One life is ended and another is forever burdened by the deadly pine cone.

Oh, damn. I should go put that pine cone back before I kill someone.

I don't, of course, because I recognize the irrationality of my thought patterns. It makes no sense to spin ever more unlikely scenarios while choosing a course of action. I really don't want to qualify for the Worry Wort Hall of Fame, but I've got an honorable mention in the bag. In addition to being a believer in the law of unintended consequences, I'm also blessed with a vivid imagination. It's not always an advantage, since it can immobilize a person to see too many possibilities. While I'm not immobilized, I'm always playing out unlikely situations in my head. Does that happen to you, too? 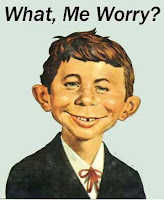 Perhaps my fretful nature is genetic, most likely inherited from my mother (courtesy of my wacky grandmother). Or maybe it's partly due to my being a farm kid. If you grow up on a farm, you see, sometimes you notice that not everyone gets to grow up. It's not unique to farm life, but dangers are real and small errors are easily magnified. The law of unintended consequences has a nasty little corollary. We can call it the principle of disproportionate retribution. It's like getting the death penalty for jaywalking.

Farms have many opportunities for teenagers to learn about the principle of disproportionate retribution, except it's difficult to learn a lesson when you don't survive the experience. One high school classmate put his foot wrong while dumping a load of grain into a silo; he suffocated under that load. A neighbor boy gave a kick to a jammed hay-baler; the unjammed baler grabbed him and baled him. My kid brother got to be a pall bearer at the funeral of a friend who rolled his tractor when he tried to make too sharp a turn. One of my father's acquaintances climbed down into an empty sump hole to open a jammed valve; he never climbed out of the methane cloud that rushed out to surround him.

It doesn't seem fair that you make a tiny mistake and then you die. That's because it's not fair. It's just one of those things. If you worry too much about it, you'll never do anything.

I try not to worry too much about it. But these things flit through my brain whenever I go for a stroll and my mind is free to wander. Maybe it's because those darned pine cones keep falling onto the path. I keep kicking them off.

So far, no reports of dramatic injuries.
Posted by Zeno at 9:30 PM

Your thoughts sound familiar but I am not coming up with a good example of my own. But on a much smaller scale---even with no cars behind me, I will move into the left lane at a red light just in case someone comes along behind me and wants to turn right on red.

It doesn't just happen to teenagers -- my old riding instructor's husband, some 60 years old at the time, got his pants leg caught in the grain auger... Oddly enough, they'd agreed on closed-casket funerals for both of them just the week before.

...just in case someone comes along behind me and wants to turn right on red.

Is that illegal in your jurisdiction or something, or are you just trying to get out of the way?

Just trying to get out of the way. Of imaginary people who may or may not appear.

I have one of those red lights on my way home from work. Three lanes, one car ahead of me, I put my blinker on to make my intention of turning clear...and the driver swerves in front of me at the last second. Rather than continuing home, I get to spend the red light banging my head on my steering wheel.

Well, at least there are no pine trees nearby.