But it was only a dream

To be fair about it, Pat Boone was the first to admit that his dream could have been caused by something he ate. (I'm guessing it was a pineapple, green pepper, and anchovy pizza.) For him, though, it was anything but a nightmare. No, it was total wish fulfillment, fraught with epic craziness right from the beginning:

That's the way dreams are, of course: entirely independent of reality. There are no constitutional provisions for recalling the president, vice president, House speaker, and Senate majority leader. And if Boone is thinking of impeachment, that doesn't apply to legislators. It's a fantasy, right along with the notion of a special election for president—yet another thing that is not in the constitution. There's an order of succession for the presidency and it leaves no room for Pat.

First of all, I wonder what Pat has been smoking. Second, why doesn't the U.S. Constitution exist in his dreamland? It's strange how much contempt the super-patriotic demonstrate toward our founding documents. (They're not really patriots at all, are they?) He fantasizes about having Newt Gingrinch back in his old job as Speaker of the House. I guess Boone's alternate universe allows U.S. presidents to appoint the congressional leadership. Does the man who thinks President Obama is a socialist hunger for the opportunity to be a fascist chief executive?

Pat Boone rushes through his frenetic extremist agenda, giving the military absolutely everything it wants and then imagining the revocation of the economic bail-out measures. President Boone fantasizes how happy Americans will celebrate the collapse into Chapter 11 bankruptcy of the country's banks and lending institutions and automobile companies. They won't mind, you see, because the national debt won't be as large under a Boone administration—unless, of course, the prostrate economy pulls the rug out from under the federal government's revenues.

But President Boone is ready. He and his fantasy-league secretary of the treasury, Steve Forbes, ride to the rescue with the flat tax:

With Secretary Forbes' guidance, we instituted the long-sought flat tax, greatly simplifying the whole process and making it much fairer to everybody. Nobody would pay more than 10 percent, and with family deductions, lower-income folks would pay little or nothing. Amazingly, by ridding ourselves of a 700-page code and all the loopholes still in it, and by taking undue burdens off businesses, statistics showed that the government would do better than it ever did before with all its labyrinthine complexity.

Boone commits the usual sin of pretending that a flat tax is required for tax simplification. Nonsense. It's an entirely separate issue and there's no inherent reason that a progressive tax structure has to be as complicated as the one we have.

As for “long-sought,” Boone is talking about the plutocrats who relish the thought of shifting the tax burden toward people with lower incomes. That's what the flat tax would do. He tries to finesse the issue by offering a family deduction that would wipe out the tax obligation of some low-income families, but it's an implicit acknowledgment of the key idea behind progressive tax rates: poor people pay less. Dollars may be created equal, but they don't stay that way. A dollar in the pocket of a poor person is subsistence. That same dollar in a millionaire's pocket is negligible. As described, even Boone's cherished flat tax contains two de facto tax brackets and lacks ideal flatness. No one dares support a truly flat tax.

Boone natters away at various other ideas, such as returning to the gold standard, revoking foreign aid, and fighting abortion. Then he turns his magisterial attention to education: 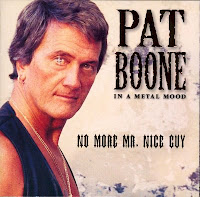 As a man who intended to be a teacher myself, I issued an ultimatum to the teachers' unions: They would return to basic math, including arithmetic, and basic English (the mandated official language), and basic science devoid of unproven theories like evolution, sticking instead to factual evidence and not discounting “intelligent design” as the more scientific basis for life and existence. All history books would again detail the reasons America was founded, and tell the stories of our Founding Fathers and national heroes—not latter day revisions. Teachers' pay and advancement would depend on the test scores and comprehension of their students.

What a teacher the world lost when Pat Boone was diverted into the entertainment industry! How fortunate we are that the end of his singing career has freed him to become a political pundit and teach us all how the world should be.

Too bad he's an idiot, prating about intelligent design as if it bears any relationship to science or reality, insisting on turning the Founding Fathers back into brightly colored two-dimensional cardboard cut-outs, and creating a situation in which teachers have to teach to a state-mandated test to preserve their careers. It's a Republican paradise!

Having created the plenipotentiary presidency of George W. Bush's dreams, Boone ends his own nocturnal emission with an edict to the judiciary, which he expects to tremble before him:

And a final ultimatum was directed to the courts, from the Supremes on down to local judiciary: “Hands off religion, as the First Amendment dictates. And you will no longer legislate from the bench. Keep your personal ideas to yourselves, and enforce the legislated will of the people.”

Hey, Pat! You want the will of the people? Then pay attention! Last year the people gave Barack Obama 365 electoral votes and a popular-vote margin of several percentage points in making him president of the United States. The people also gave the Democratic Party large majorities in both houses of congress. The people have spoken.

You really ought to wake up and listen.
Posted by Zeno at 10:00 PM

I love the way he assumes someone like him would win this special election...

It's scary that he has an audience.

This flat-tax idiocy is a blatantly transparent attempt to tax the rich less -- it has exactly zilch to do with de-complicating the tax code. I'm Canadian, so my details differ from yours, but working the brackets calculation is at worst a marginal complication in the arithmetic (or just look it up in the tables supplied with the T4 package -- or buy a computer tax program, which makes the arithmetic invisible to the user). The hair-tearing part (which eventually drove me to give up on DIY and hire an accountant) has always been figuring out which deductions and credits I could claim, and how to report various types of non-employment income -- and for many of those rules, the richer you are the more you benefit from them, as more of your income is derived from investment cources (eg. capital gains and dividends, which up here are taxed at discounted rates, or subject to various credits).

An author I read commented in regards to the flat tax proposals as a way to simplify the tax code (paraphrased from memory): OK, so you've instituted a flat tax. Great. You've knocked two pages off the tax code.

Might not be fair, but it sure is simple.

Flat tax isn't about "simplicity", either.

[I do wish you'd kill this use of a non-resizable window for comments. Major pain in the bleepss, as Mr Stewart would say.]

But there really is a connection between graduated tax and unconscionable complexity in the code -- by way of the constant efforts of the rich and their vassals to defeat the progressive tax through gimmicks. Simplify the code, and people wouldn't pay a 15% marginal rate on a million dollars of income. Unthinkable!

And that, of course, is the reason that Forbes's flat tax proposal would tax (last time I looked) ALL income of EVERY KIND at a single low rate, except for rich people's main sources of income, which would be tax-free. It's only fair.

Porlock: I don't know why you think the comment window is not resizable. I'm using one now and I just stretched it horizontally without any trouble at all. I can grab the lower-right corner of the frame and shape the rectangle however I wish.

About the window: Odd. It definitely is not resizable here. And some other comment windows, on Blogger sites even, are. I guess Google just doesn't now how to do it in a browser-independent way, while other providers to, proving to my not great surprise that Google actually isn't perfect.

"Last year the people gave Barack Obama 365 electoral votes and a popular-vote margin of several percentage points in making him president of the United States."

And, as Pat says "I say "insane" because the measures and pronouncements being made by our president and our Congress – without consulting at all with the folks who elected them! – are truly the stuff of nightmares."

I guess he thinks we need a national election every time a president needs to sponsor legislation.
George Tirebiter

I usually open the comment window with a middle-click rather than a left-click, so it opens in a new tab instead of that stupid extra window. But also, I've set my Firefox up to disable the disabling of resizing, etc. by scripts.

The Republicans are right about one thing, at least in Pat's case: entertainers should stay out of politics.