There is a flurry of interest in the national media about the president's hair. In a dull period of world peace and universal prosperity, it's understandable that such an issue should seize the attention of American journalists and political pundits. Is President Obama going gray? It happened to Bill Clinton! Inquiring minds want to know!

Some people dismiss the significance of the graying of our presidents. After all, the median presidential age upon assuming office is about 55 years. During a man's progression from 55 years of age to 59 (or to 63 in the case of a two-term president), the choices about one's hair are reduced to “go gray” or just “go.” Absent hair dye or a wig, you're either bald or gray by the time your fifties have run their course.

That's why i was not particularly shocked by Don Asmussen's graphic journalism in the San Francisco Chronicle. President Obama may be only 47 right now, but it's clear that he is already on his way to Anderson-Cooper-ville. 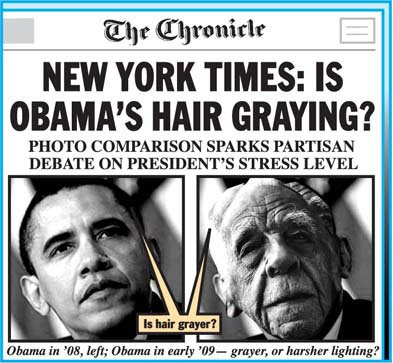 Nevertheless, it gives me pause when I dare to mock the national media. Perhaps it is I who fail to appreciate the significance of Obama's life transition. We should consider the possibility that the burdens of presidential office are uniquely powerful hair-whiteners that go beyond the effects of mere natural aging. That would explain, of course, why major national media outlets would devote so much attention to the matter.

I must admit, though, that I fear to face the implications of that possibility. I have done a bit of investigation myself and the evidence is unambiguous and compelling. There is an excellent chance that I was secretly president of the United States during the past eight years. Hair doesn't lie.
Posted by Zeno at 10:00 AM

Being in charge is not a healthy job.