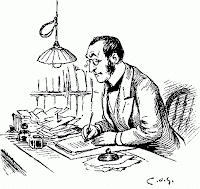 It's happening now and it's happened before. California has a budget again, one of those jury-rigged jobs created by tacking on just enough vote candy to squeeze out the constitutionally mandated two-thirds majority in both houses of the legislature. It's never pretty.

The cuts are percolating down to the local level as school districts make out pink slips to send to teachers who might be laid off. The state education code requires that public school teachers be informed by March 15 if they won't have a job in the fall. I remember a few years ago when one community college district pink-slipped virtually the entire faculty, just to be on the safe side. It was eventually able to rehire them (except for those who decamped for better funded districts) when state funds rebounded in the interval, but I'm sure it was traumatic.

The current financial crisis in California and the country reminds me once again how I live my life enfolded in a cozy security blanket. In a tenured faculty position with years of seniority, I'm in a comfortable cocoon. My school district would have to cut a majority of its permanent staff before I'm at risk.

Not going to happen.

I guess the only people in a better position are those top executives who get to reduce costs by firing their underlings. And even when their companies go bankrupt, those guys float away on golden parachutes or scarf up bonuses funded by bail-out money. (Dare we even question their entitlement to those wads of cash?) I suppose I'm really not in their league, even if my position among mortals is enviable. Every day I am grateful for it.

I dig, but not too deep 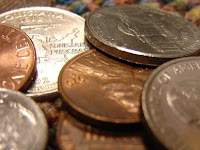 As I was saying, the current crisis seems familiar. Once again, the low people on the totem pole are the first to get it in the neck. Our student help is being laid off and our part-time staffers are losing some of their hours. It sucks.

It wasn't that long ago that one of my colleagues, just appointed to an administrative position, lamented that she had had to dismiss all of her student assistants. She was telling me about it because she felt bad, but she was also explaining why she had no one to spare for a joint project we were working on. I had a bunch of transcription work to shuffle through, and it would have gone much more swiftly with a student aide to read things off while I sat at the keyboard and banged in the data.

I told her not to worry about our project or to commiserate with me over the tedium of doing the transcription as a solo job. I'd check with the mathematics department about getting some student help. She brightened at that suggestion, but wondered aloud whether my department would have any student help hours to spare after her office had lost all of its. I shrugged and indicated it wouldn't hurt to check.

Actually, I had no intention of asking the math department chair for any assistance. I was simply going to ask my students if any of them wanted a short-term job. Soon I had a couple of students eager to earn a few bucks for some simple number reading. The job came off without a hitch, vastly simplified by the presence of the student aides, and I dug into my own pocket to pay their wages.

That's right. I was sufficiently exasperated with the situation to cough up the funds to pay the student help. That will certainly teach the school a lesson, won't it? When you tick off Dr. Z, he'll get even by spending his own money.

“Ha! I'll show you all! I'll pay the students myself.”

Seems silly, in a way, yet great was my satisfaction at getting the job done and my students paid. I could afford it and the results were excellent. The students seemed pleased, too.

There was, of course, one tiny complication. The administrator was pleased that I had completed my part of the project so quickly and just a little surprised to hear I had been successful in lining up student help. She asked me whether she should write a thank-you note to the math chair. Oops! The math chair knows nothing about it. I merely smiled and said it was all taken care of and not to worry.

And there it sits, fading into the past. It appears that the administrator and the math chair have never crossed paths or, if they did, never compared notes on that project. If they had, the math chair would have told her the department didn't have any student help and that Dr. Z never asked for any.

Ah, yes. The time-honored "make them pay for it themselves by making it too hard to get us to pay for it" method. Although, actually, your situation wasn't quite there. Maybe even a bit worse than there.