Credit where it's due

The editorial cartoonist for the McClatchy newspapers decided this weekend to honor the hero of the New York City airliner crash. You might be thinking that Rex Babin chose to sing the praises of Chesley Sullenberger, the veteran pilot who lives here in California and whose cool-headed response to the air-borne emergency resulted in the survival of his plane's entire crew and all of its passengers.

Nope. Babin says God did it. 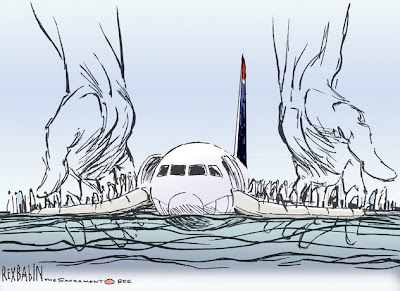 Now if only God had chosen to be more helpful during other plane crashes. The ones in which he let people die. But I guess he was busy.
Posted by Zeno at 7:00 AM

You're obviously misreading that cartoon.

God is trying to duck the plane full of sinners into the water, after Satan intervened and saved them from the divinely inspired flock of geese.

Upon reflection, I see that you must be correct, Sili. God is about to inflict "baptism" on them, right?

"God" gets all the credit, and none of the blame. All the time. It sickens me.

Am I the only here who thinks that God is touching that plane inappropriately?

You obviously have a sick mind, Science Pundit. Is it possible we're related?

Sheesh. I am so sick of God getting the credit that belongs to the people who make things turn out well and none of the blame for the need. Mine disasters - thank God for the survivors! forget the hard work by the engineers and rescue personnel! - to plane crashes. Grrrr.

Maybe god was trying out a new remote control and it sucked?


Or his flying skills suck?

Those hands don't really look like they're there to help the plane, but merely to present the stricken aircraft. I would even say boastfully.

God: "Look here! See what I have wrought!" [gesticulates ominously]

If I were Chesley Sullenberger, I'd be wanting to put a foot in Rex Rabin's ass. My dad flew planes professionally for 30 years or so, and Rabin's snubbing that pilot's skill is pretty offensive as it is...

I don't care if you do believe in a god, several gods, or the living divinity of Life, the Universe, and Everything; completely ignoring the pilot's skill is a real insult.

As you basically say, imagine the cartoon with God's hands swatting a plane out of the sky - like say the 737's that went down in fair weather in the midwest (I forget just where) and in Colorado Springs. I think the reaction to such a cartoon would be outrage - yet we believe the opposite so easily....