An unsleeping malice has crept up from the Dark South and lain in wait for me. Today it pounced. I was minding my own business, tending to the fuel requirements of my vehicle, when the gas pump came to electronic life and began to bombard me with commercial advertisements. Yes, a northern California Shell station had become infested with TV ads, with small televisions blaring out commercials from atop each pump. It was a nightmare come true.

The ads were interspersed with public-service announcements, offering me advice about road conditions. I guess that's supposed to make it all okay. Then the screen flashed an in-house ad for PumpTop TV, extolling the benefits of shoving advertising into yet a another new venue. (Yesterday, the inside surfaces of restroom stalls; today, the tops of gasoline pumps; tomorrow, the world!) The purveyors of this new intrusion into our lives are not shy when it comes to bragging about their intentions:

PumpTop TV is a premier Out-of-Home Digital Media network that delivers current news, entertainment and advertising to millions of drivers as they fuel their vehicles at the gas pump. Daylight-viewable LCD screens mounted at eye level on top of gasoline pumps at select, high-volume gas stations provide a broadcast television-like experience (video and audio) to a desirable, captive audience out of the home.

Apparently this new venture has been building for a couple of years. Westinghouse brags that their equipment is now installed in some 700 service stations. The invasion apparently began in Los Angeles in the first half of 2007. I was blissfully unaware of its gradual encroachment on northern California until the ads began to blare at me.

I will not go to that gas station again, but I fear I am fighting a doomed rear-guard action. The soulsuckers are here.

I'm too mild-mannered to use the hammer from the toolbox in the trunk of my car, but I can think of some nice new applications for contact paper. 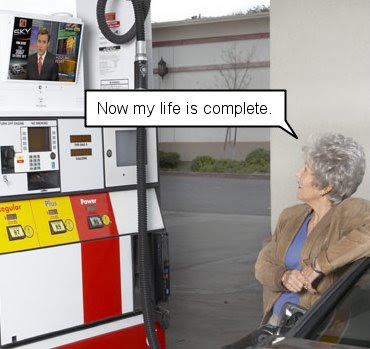 The screens weren't quite so big, but I first encountered one of these things nearly ten years ago at a gas station in Oklahoma. The chatter was bad enough, but the volume was cranked to eleven: I had to go around to the other side of my car until the pump's automatic shutoff clicked.

The "service" only lasted for a little while: I'm not sure whether it disappeared because it was only an experiment, or because the gas station figured that the ad revenues didn't balance the bad will. Anyway, when I next visited the station six months later, the screens were gone.

Here's to hoping your luck is the same.

We've had 'em here in Georgia for a long while now. Remember, if you struggle you'll only make it hurt more.

I encountered one of those in Vegas (not a surprise). As BillyC says, the volume is way too high.

But the advertising that I've been noticing lately has been the kind that occurs at department meetings. I don't know if this is normal or not, but being one of the biggest departments, we seem to have a crowd of on-campus constituencies (development office, automotive research consortium, etc) lining up to give presentations at our meetings.

This won't work in Oregon, we cannot pump our own gas. Although, I would gladly trade for ads so that I could pump my gas...

They started putting these things at the checkouts in supermarkets, too. I refuse to shop at stores that have them. I won't use the self checkouts, either, until the stores start giving us a discount for being our own cashiers.

Oh, but Alison they do!

For one thing, the self-checkouts generally move faster. Partly this is because a human checker has no incentive to speed up the process. They don't get paid more for working faster. You, on the other hand, get out of there that much more quickly. A bigger effect, though, is the fact that there's usually a single line for a while bank of stands. If one person is slow at their own checkout, it doesn't hold up the entire line.

Another benefit is bagging efficiency. I can generally get twice as much into a bag (especially bringing my own) as the checker can. Or the bagger, but there are so many fewer baggers now, which just adds to the slowdown in my first point. Fewer bags makes it easier to carry my groceries up into my apartment, not to mention the lowered impact on the environment on those occasions I've forgotten my reusable bags.

I don't have any ankle-biters around, but self-checkout stands don't generally have as much in the way of "mommy-buy-me-that" distraction. And there may be more benefits that I can't think of right off the top of my head.

Oh, and since there's a running thing about the Captcha we get: today mine is "coder". Too bad I left that life back in college.