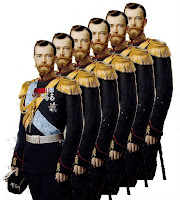 Oh, oh. We are apparently in the grip of a tsarist resurgence. Had you noticed? The national media assures us that this is so. This is especially true of the petulant right-wing publications that are having trouble processing the fact that liberals triumphed in the last election. (Liberals! In a center-right nation!) But even the more moderate national press isn't exempt. Here's a sampler of examples:

President-elect Barack Obama is nearing an appointment of his “car czar” and appears to be focused on Steven Rattner, the financier with close connections to the Democratic Party, according to people briefed on the conversations. —New York Times, January 13, 2009
Role of Federal Tech Czar to Be Defined by Obama. —Washington Post, November 14, 2008
Sen. James M. Inhofe, ranking Republican on the Senate Environment and Public Works Committee, asked Nancy Sutley, Mr. Obama's pick for Council on Environmental Quality (CEQ) chairman, whether she would be undermined by the new climate czar, Carol M. Browner. —Washington Times, January 19, 2009
Obama Era of 1,000 Czars Ushers in Caesar. —NewsMax.com, November 14, 2008.

It's scary, I tell you. The latest item, published in the Sacramento Union, is from the columnist Peter Hannaford, a relic of the Reagan years who has yet to come to terms with the 21st century (and apparently wasn't too crazy about the 20th either). As Hannaford puts it,

The Obama White House starts out with no fewer than eight “czars” (including at least two czarinas). There is one each for the economy, energy, health care, counter-terrorism, government performance, regulations, urban affairs and education.

All modern presidents have had staff specialists for various major topics. The National Security Council and Council of Economic Advisers have been with us for decades. The idea is to develop information and options for the president in various areas independent of the bureaucracies of the cabinet departments. A specialist, however, is one thing, a czar quite another.

The term “czar” implies that the person holding the title is supreme in his particular area, not only coordinating the work of various relevant agencies, but also determining priorities and conveying the president’s orders.

Yes, the term “czar” smacks of supreme arbitrary authority. Imagine the effrontery, the nerve, the cheek of the Obama administration to so lightly assume the trappings of totalitarianism!

Go ahead and check the White House website. In fact, try searching it with Google (now that President Obama has revoked the Bush blockade on search-engine indexing of on-line executive branch information). Use “czar site:whitehouse.gov” to see what you get.

Nothing, basically. All the hits are from the Bush administration. Nothing from the new Obama administration, despite the new president's supposed fondness for creating positions for a new horde of little despots and using titles from the days of imperial Russia.

Cass Sunstein? The president has appointed him as chief administrator of the Office of Information and Regulatory Affairs within the executive branch's Office of Management and Budget. The Chicago Tribune, however, heralds Sunstein's nomination with “Left not sold on Obama's regulation czar pick.”

I think I gave the game away with that one, right? Sunstein's real title is just too long. The Tribune's headline writer would be hard pressed to fit “head of the Office of Information and Regulatory Affairs” into the space allowed for an article heading. Even “OIRA administrator” would be a challenge, but hardly anyone would understand it.

There are only two reasons that “czar” is the word of the moment:
Reason (1) I fully understand, especially in print media, but I decry its casual use in broadcast media and don't see why newspapers insist on using it in the main body of their articles (as opposed to headlines). Laziness and convenience are not difficult to understand.

Reason (2) I also understand, but for those wingnut propagandists I have no patience. They are spinning as hard as they can, trying to whip something out of nothing. (It ought to work. They turned a transplanted Texas lackwits into a president.) For them I have a four-letter word other than “czar”:

A particularly unhinged commenter at Dispatches from the Culture Wars asked, ominously, "Why is Obama naming all of his appointees Czars? Welcome to the Socialist States of America."

Because the czars were socialists, get it? Get it? Oh, never mind.

Wouldn't the autocratic leader of OIRA be the OIRArch?

Thanks for the Angry Flower link, Sili. I made a small joke about the "Prestimion option" in my post about a presidential pardon for Bush, which is precisely what the Angry Flower cartoon was talking about: erasing the 8 years of Bush from history.

(I have a cousin who used to yell "Forget you!" at people who irritated her, as I have cause to remember. For some reason that came to mind as I was writing in these post-Bush days.)