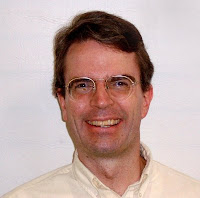 The well-known liberal bias of reality seriously irks conservatives. They have responded by declaring that they make their own reality, but that didn't pan out too well. They have worked to build an alternative universe where Fox News is the voice of truth and the GOP is God's Own Party. Conservapedia is part of that alternative universe, the conservative counterpart to Wikipedia.

Conservapedia first came to my attention when its founder Andy Schlafly (yes, the spawn of Phyllis) appointed himself a peer for purposes of peer-reviewing a scientific research paper on E. coli mutation. Aschlafly (as he unselfconsciously styles himself on the Conservapedia site) demanded that Richard Lenski “post the data supporting your remarkable claims so that we can review it.” (Schlafly is the holder of a B.S.E. and a J.D., which he proudly appends to his name, so he's more than qualified to evaluate research in biology.) There followed an exchange between Lenski and Schlafly in which Lenski thoroughly eviscerated Schlafly, and even dangled the guts in Schlafly's face, but Schlafly never seemed to grasp the offal truth. The one-sided fight was followed with much amusement by several blogs, including Pharyngula, which is where I learned what was going on.

Since then I have always been able to count on Conservapedia as an infallible source of comic relief. It's actually difficult sometimes to remember that Schlafly and his minions are in dead earnest. The Conservapedians take themselves very seriously, which is probably one of the reasons Aschlafly mistook himself for a scientist.

Now Schlafly turns out to be The Shadow, who knows what lurks in the hearts of men. In particular, Schlafly knows that Barack Obama is a Muslim. Probably, anyway. The likelihood is so high, at least in Schlafly's opinion, that he insists on including his speculation in the Conservapedia entry for the next president of the United States. You'll have to risk going to Conservapedia itself if you want to track down all of the references yourself. I didn't preserve the links in the following excerpt. I did, however, stick in a bunch of comments, which you'll find embedded in braces:

Obama will likely be the first Muslim President

The argument that Obama is a Muslim is largely based on his Islamic background. It also includes:
Obama tries to downplay his Islamic background by claiming that his Kenyan Muslim father was a “confirmed atheist” before Obama was born, but in fact less than 1% of Kenyans are atheists, agnostics, or non-religious.[44] {What? No record of Obama Sr. joining an atheist church?} There is apparently no evidence of any Christian activities or local church participation by Obama while he was in Massachusetts from 1988 to 1991, nor of Barack Obama's joining of a Mosque (The Islamic house of worship) at any time in his life. Finally, Obama abruptly left his radical Christian church in Chicago in 2008, when it became politically controversial, without first finding another church to join. Obama was sworn into the US senate on a Bible.

After the Lenski affair, no one can possibly be surprised that the standards for evidence at Conservapedia are skewed in whatever bizarre way Andy Schlafly prefers. Even some of the moderators at Conservapedia have noticed this and are concerned. One of them summarized the dissension in the right-wing ranks:

The facts, however, remain that:
What kind of synthesis do you hope to achieve in the face of such demonstrably principled opposition? These are not lone, liberal voices. These are long-standing contributors who collectively insist that this is plain wrong and must be removed.

How can Aschlafly respond to this detailed and specific indictment? Not a problem:

We respect the views of a minority among us (and note that the minority you cite has displayed almost no experience with Islam and/or Islamic education). Regardless, obviously logic prevails over even the opinion of a majority.

No question, therefore, why Andy is resolutely standing his ground. Unlike his in-house critics, Schlafly is an expert on Islam.

Let me just say that you owe me a new keyboard for that "offal truth" pun.

I was actually just blogging about the ridiculous excuse for an encyclopedia that is Conservapedia myself just a few short weeks ago... It is amazing how ridiculous it is.

....is concerned that its inclusion in the article could damage Conservapedia's credibility.

I didn't know it had any.

Andy and frere Roger turned up on talk.origins about 10 years back, and provided much amusement for several weeks.

I think I love best the "fact" that Obama's father can't be an atheist since only 384,000 people in Kenya are and he couldn't be one of them because ... well, because.

His claim of church attendance of "his two immediate predecessors" is a fantasy, an alternate reality.

I got banned from Conservapedia very shortly after it went up. This was before they had locked down who was allowed to edit its entries. I was fixing the risible entry on Physics (again with the Conservative Version of Reality), and got a little clever. No sense of humor, these people. They just shut me out entirely, even though I had demonstrably improved the article and pointed out a couple of errors. They're a closed system, a cult. Groupthink.

George! Is that you? Get down here mister, your mother fixed up a stack of groatcakes, just the way you liked them, heavy on the forty weight.

How is a renegade different from a maverick?

Too bad Obama isn't really an atheist. It'd be so much fun to watch all those heads explode.

On middle names: Andy Schlafly's is Layton, which Behind The Name tells me derives from "settlement with a leek garden" in Old English.

Does this mean that Andy is a farmer from the Middle Ages? It'd explain a lot about his views...

By Conservapedia standards this is actually somewhat tame. Aschlafly also decided that Lief Erickson reaching the new world never happened. Apparently its a story told by the evil liberal atheists to downplay what success of the good Christian Columbus. Never mind that Erickson was almost certainly Christian himself...

http://www.conservapedia.com/index.php?title=Template%3AMainpageright&diff=495043&oldid=494986 is the edit in question.

I have encontered the ravings of Conservapedians before as they frequently appear on the much-maligned "Fundies Say The Darndest Things", but I have only recently been able to nerve myself to go straight to the horse's arse, as it were. I*t's pure gold!

This conservapedia is the most biased reading I have ever done. I myself am an atheist, so I didn’t think I would agree with a lot of it. After all conservative suggests some Christian roots. However, the arguments aren’t even presented in a logical way. For my particular topic (atheism) if you will – I am going to change this so it makes sense for Christians.

Atheism, … is the denial of the existence of God.

Granted it is my own fault for expecting a little bit of thought to go into the way things are worded (you know because it is an alternative encyclopedia.) Read it farther and they try to rationalize this wording by suggesting that those that do not believe are the ones that should have the burden of proof…. Even though everything I know to be in true in science shows that you can’t prove something doesn’t exist, only that it does. (After all the absence of something, isn’t proof that it isn’t there.)

I had some hopes, as despite my views I have been hoping that some conservative ideas would become a bit more open (you know like fiscal responsibility is a good thing). After all I watched the guy on Colbert, and he made one good point. There was a good point that there are risks to a woman when she has an abortion, and that risk should be talked about. (I am all for informed choices – yes I am also pro-choice.) So I thought I would take a look.

Three subjects atheism, abortion, homosexuality, feminism and evolution. I have come to the conclusion that not only is this site biased beyond what is normal for a “good” Christian, it is also ignorant. Talking about feminism “believe that there are no meaningful differences between men and women (The most significant belief underlying contemporary feminism is that there are no sex differences; therefore advocacy for equal rights must be extended to advocacy for equal results or outcomes.)” Rather than realizing that feminism is different for all woman; but the general idea isn’t that there aren’t biological differences (as suggested – as we feminists are quiet aware of biological differences), rather we point out we aren’t as valued. That we deserve equal rights and equal results because we matter too…

Anyway, I will shut up before I write a book :) I am still in shock that anyone that claims to have an education would put this together.

My favourite Conservapedia article was the first iteration on Florence, Italy:

Florence is a medieval city of the Medicis on the River Ebro in the Italian region of Tucsony. It is known for David's statue, the baptistery and the Dome.

First, the river that flows through Florence is the Arno. The Ebro is in Spain. Second, Tucsony is probably in Arizony. Florence is in Tuscany. Third, the word is "baptistry", not "baptistery" -- this misspelling persists to the current day. Fourth, I assume that the Dome is a misspelling of Duomo, which is Italian for "cathedral".

I haven't thought of myself as a conservative until recently when I have become increasingly aware of the extent of media bias and the altering of history to fit current liberal minded people. Conservapeida has less spurious claims that wikipedia and one only has to examine global warming section for evidence therof. The wikipedia history of revisionism regarding this one issue has taken it out of the realm of accuracy. By contrast the conservapedia comes much closer to providing an unbiased view of reality on this issue.

A more parsimonious explanation, Anonymous, is that you are poorly informed and gullible. Conservapedia is a puddle of nonsense and people who take it seriously are dupes or fools. Pick either or both.

Re two comments up: why are so many of these proud conservatives anonymous?

(My captcha word is "unwed". This amuses me)

Thank you, very much, for writting this blog.