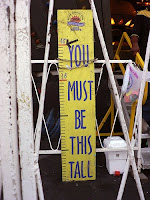 But it's still the same game

Joe Soucheray needs my help and cries out for my assistance in an opinion piece published in the St. Paul Pioneer Press:

What we need is a margin of victory that is mathematically bulletproof, not one-half of 1 percent. I don't know what that margin is, but a mathematician could come up with it based on vote totals.

As a civic-minded mathematician, I hasten to answer his call. Joe probably won't appreciate it, though, since my response boils down to little more than, “Wow, Joe, you sure are a dumb-ass, aren't you?” Under those circumstances, it's easy to see how he might think I'm not being very helpful.

I just said “he might think.” Now that, you see, would have made a difference. Soucheray believes that the hassle in the Minnesota senate race could have been resolved by setting a new standard for victory.

Nonsense. And you don't have to be a mathematical genius like me to realize that. You just need to give it a tiny bit of thought. Soucheray didn't:

Out of 2.9 million votes cast, there would have to be a margin of victory that could not be automatically challenged as questionable. One vote below that number would call for the coin flip—yes, a coin flip.

Now that is just dumb-squared. Not the bit about the coin flip. That's a perfectly respectable way to break a tie. It's Joe's comment about “one vote below.” Freaking hilarious. Can you imagine the hassles and lawsuits every time the results teeter on the boundary of Soucheray's new margin-of-victory standard? It doesn't matter how many wise mathematicians and statisticians choose the new standard. Any time you put a dot on a number line, the question arises whether you're on one side or the other. It makes no difference whether the standard is “more votes than the guy in second place” or “a margin of at least one percentage point,” the tally will be disputed and adjudicated every time it's close.

You can't fix this problem any better than Minnesota already did. A bipartisan panel looked at each disputed ballot that made it through the process (some, of course, were disqualified at earlier stages and a batch of those are under litigation) and voted, usually unanimously, to allocate the vote to Franken, Coleman, or neither. The whole thing played out on live video, complete with images of each questioned ballot. You can't improve on that a great deal.

It doesn't matter whether you're trying to determine who won a simple plurality (as in the current Minnesota contretemps) or if some arbitrary margin of victory was achieved. In the end it comes down to counting individual ballots and trying to figure out what side of the line you're on.

Even the proposal for a run-off election suffers from the same potential problem. Saxby Chambliss thought on election night that he had avoided a run-off in the Georgia senate race. He later found out that he had not quite won an outright majority and had to face the Democratic nominee in a second round of balloting before he secured re-election. If the margin in the first round of voting had been within one or two votes, you can be sure that Sen. Chambliss would have been in court seeking to declare himself the majority-vote victor who did not need to risk a second ballot.

The notion that some new definition of victory will solve all of our problems is a delusion on the part of Joe the Columnist. It is, frankly, quite illogical. 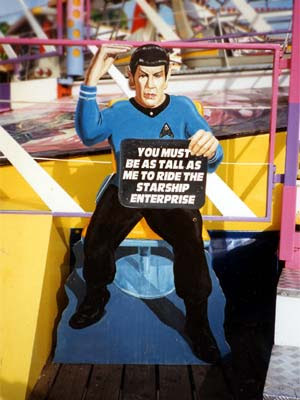 I spotted the Spock picture before I read the last paragraph and wondered how he would fit in... nicely done.

I had this same discussion with a number of people back in 2000 with the Florida recount.

When the vote is really very close the processes just are not capable.

Maybe we should have the best of 7 recounts?

I recently came accross your blog and have been reading along. I thought I would leave my first comment. I dont know what to say except that I have enjoyed reading. Nice blog. I will keep visiting this blog very often.

Related to this:
I used to know a guy who, in a prior career, sold baby cribs. We were discussing government regulations, and he told a story of having to toss out a shipment of cribs because he wasn't allowed to sell them: the bars were 1/8" farther apart from each other than regulations allow. An infant's head could get caught in them.

He complained that it was only 1/8"... couldn't they give him that little leeway?

I replied that, well, there's already leeway built into the regulation. If they give you another 1/8", the next guy will want 1/8" beyond that, and the next will want yet another 1/8". After all, each one can say "It's only 1/8 of an inch from what you've approved."

He got it. It had never been put to him that way before, that you have to draw lines, and that people will always question things that are sufficiently close to those lines.

Wouldn't life be so much more fun if N wasn't totally ordered?


I guess that at least we now have solid proof that Franken isn't a Lizard-American.

Or perhaps that's just what they want us to think.

This is a late comment, since I don't usually read your blog, but wanted to make a point that occurred to me in response to a similar article I saw elsewhere: Consider a linear scale, like a number line, along which the proportion of votes for two candidates varies smoothly. The current system means that there is one point on the scale which is a decision point: the point where there are equal numbers of votes for each candidate. If the initial vote outcome is sufficiently close to the decision point, you get a disputed election: recounts, questioned ballots, and so on. You could call the range of outcomes which result in a disputed election the disputed region.

Now suppose we change the system so that there is a margin below which we decide the election by some other mechanism -- a coin flip, revote, or whatever. Now the situation is not only just as bad as before, due to the fact that there still must be a decision point, but it's worse, because there are now two decision points: one point between a clear candidate A victory and an an alternate resolution, and another between the alternate resolution and a clear candidate B victory. If these points are far enough apart for the new procedure to make any difference at all, then the difference they make will be not to make disputed elections less likely, but to make them up to twice as likely, as there are now two disputed regions each of about the same size as the original region. If the decision points are far enough apart that there is no overlap in the disputed regions, a disputed result would be twice as likely; if they are set so that the disputed region about one decision point just barely reaches the other decision point, a disputed result would be about 1.5 times as likely. Of course, the chance of a disputed election will be minimized if there is perfect overlap, which would correspond to the system we have now: alternate resolution only in the case of an exact tie.

Quoting from you: “Either we dismiss this as mere coincidence or we accept the Bible as a book of truth.”

I want to added: of course is a book of truth, it¨s has many references that shows came from God.
“8 The Bible is scientifically accurate. It even contains information that was far ahead of its time. For example, the book of Leviticus contained laws for ancient Israel on quarantine and hygiene when surrounding nations knew nothing about such matters.
At a time when there were wrong ideas about the shape of the earth, the Bible referred to it as a circle, or sphere. (please read Isaiah 40:22…22 There is One who is dwelling above the circle of the earth, the dwellers in which are as grasshoppers, the One who is stretching out the heavens just as a fine gauze, who spreads them out like a tent in which to dwell, 2)
The Bible accurately said that the earth ‘hangs on nothing.’ (please read Job 26:7…7 He is stretching out the north over the empty place, Hanging the earth upon nothing)
Of course, the Bible is not a science textbook. But when it touches on scientific matters, it is accurate. quoting from What does the Bible really teach pag 20