Giving credit where it's due

Bush apologists are understandably a frustrated group of people. With the days dwindling down to a precious few, it's increasingly difficult to hope that the president will accomplish anything worth celebrating before his exit from office (which, of course, will be an event worth celebrating, but that's not considered an “accomplishment,” as such).

Richard Nixon began his presidential tenure with the expressed hope that he would meet the challenge expressed in a young girl's placard: “Bring Us Together.”

“I saw many signs in this campaign. Some of them were not friendly. Some were very friendly. But the one that touched me the most was—a teenager held up the sign ‘bring us together.’ And that will be the great objective of this administration, at the outset, to bring the American people together.”

Nixon achieved his goal in the worst way possible when the American public united against him and cheered his resignation in 1974. Now George W. Bush has nearly matched him. While he is not leaving office any too soon, Bush is as unpopular today on the verge of his departure as Richard Nixon was on the eve of his forced resignation, with less than a quarter of the citizens approving of his job performance. 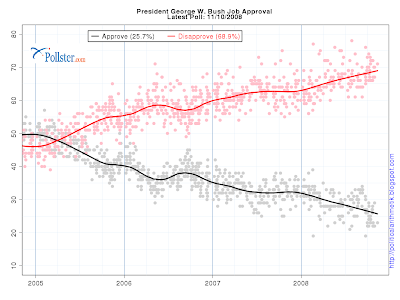 So what dregs can a Bush apologist find while scraping the bottom of the barrel for something good to say about our lame-duck president? What can we give him credit for, apart from uniting America against him and poisoning the well for Republican candidates?

With a little bit of creative thinking, some right-wing pundits want us to give President George W. Bush for “keeping us safe” from terrorism. That is, we're supposed to grade him on a generous curve. After the epic fail of his negligent security policy of 2001, ignoring the chatter of our enemies and the explicit warning (“Bin Laden determined to strike in the US”) of the presidential daily briefing of August 6, 2001, thereby permitting the events of 9/11 to occur, the president got semi-serious about homeland security. Since then, of course, there have been no major terrorists strikes on U.S. soil. The president, however, has chosen to expend even more American lives than were lost on 9/11 in feckless actions in Afghanistan and Iraq, the idea being that Americans won't be killed on American soil if we make them available to be killed overseas.

The action in Afghanistan started well, ousting the Taliban government that had sheltered al Qaeda, but then lapsed when bin Laden was allowed to escape and Bush decided it was more important to launch a second war to settle a family feud with Saddam Hussein. Even Bush admitted in 2005 to 30,000 deaths among Iraqi civilians, but it's all in the good cause of preserving (or restoring, that is) the American homeland security that he failed to protect in 2001.

It's not a proud record, but it's all Bush apologists have to work with. Conservative editorial cartoonist Lisa Benson is on board. She celebrates George W. Bush's legacy by first mocking the media's obsession with Barack Obama and his Hawaiian beach vacation. The poke at the media is perfectly on target. The suggestion that they turn their attention to Bush's homeland security legacy, however, expects way too much forgiveness on our part, even if Benson makes Bush look rather pathetic as he seeks our notice. 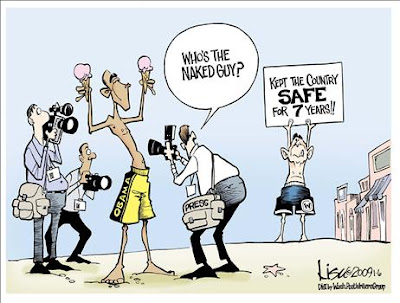 I don't have Benson's artistic skills, but I can offer an improvement to her cartoon that is more in keeping with the reality of George W. Bush: 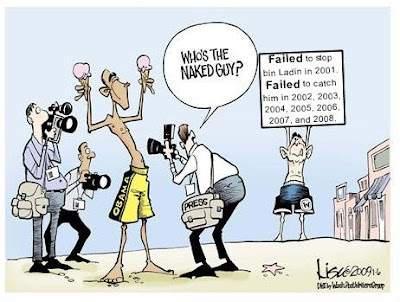 Goodbye, George. And good riddance.
Posted by Zeno at 2:00 PM

Let me get this straight…compared to the War on Terror, letting Al-Qaida perform another World Trade Center attack in the last seven years would have meant fewer dead US citizens, plus several times that many Iraqi and Afghans would have been alive, plus it would have been cheaper. So how has the US been kept safe again?

Exactly right, Kai. The math doesn't quite work. Americans and Iraqis have paid a very high price for the removal of Saddam Hussein, but George W. Bush had his heart set on it.

That reminds me of something...

Why the f*ck does everyone keep forgetting about the anthrax attacks of late September, 2001? That is a serious biological terror attack on our homeland that occurred AFTER 9/11, and yet people just pretend that it doesn't exist. What about the Beltway Snipers in 2002? Random killings designed to spread chaos, plans to bomb a cop's funeral, plans to recruit other youths to spread the sniping rampage in the name of Islamic Jihad...sounds like terror attacks in the homeland to me. Even grading on this pathetic curve, Bush only passes if you spot him two whole series of homeland attacks, including one series with a biological weapon.

The Beltway Snipers were not Islamists. Whatever their motive - the trial didn't address it - they weren't jihadi.

Which means, of course, that they don't count.

For the same reason that people are not counting high school shootings, the OK City bombing etc -- these were domestic issues, which had NOTHING to do with international politics.

Until I read that the cartoonist is conservative, I though the cartoon was supposed to mock W, too.