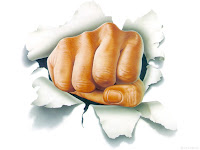 The door rattled on its hinges at the impact of the heavy blow. We jumped at our desks and our heads snapped around to stare wide-eyed at the classroom's back entrance. A second loud rap. A third. The knocking became louder and more rapid. Almost frantic.

Those of us who could tear our attention away from the door looked to our teacher. She seemed as startled as the rest of us, but as the only adult present it fell to her to respond. She worked her way through the crowded room and approached the back door. The pounding continued as she reached for the knob.

We were in a parochial school classroom, grades one through four jammed into a single room. Our parish was not big enough to support a full-scale Catholic school, but our priest was an ambitious man who had struggled to make our school a reality. Monsignor had done much of the construction himself and dragooned parishioners into volunteering their assistance. My family and I had spent many weekends contributing our time to the construction of the buildings. My dutiful parents had enrolled me despite the school's meager resources and suboptimal conditions. I was deemed resilient enough to survive the ordeal, but my siblings remained in the cozy cocoon of the public school.

The teacher turned the knob, the door burst open, and it was Monsignor who charged into the room. He pushed past the teacher and glowered at the assemblage of students, some of whom were trembling. We were not necessarily relieved that the manic door-pounder had turned out to be someone we knew. Monsignor was an intimidating principal.

“Why didn't you answer the door?” he demanded.

“Didn't you hear me knock?”

All too well. We made no answer. Some of the first graders were hiding their faces. That wouldn't please Monsignor, but it was better than letting him see you cry.

“You know, it's customary to open a door when someone knocks. You could miss a special opportunity or an occasion of grace.” 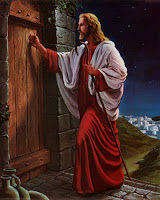 Yes, we'd all seen the kitschy pictures of Jesus at the door. None of them appeared, however, to show our Savior pounding the portal like a psycho.

“What if it had been an emergency?”

“What if I had been running away from a maniac?”

Instead of just being one?

Much as we wanted to. Right now.

“I could have been trapped on the other side of the door and unable to escape. I could be lying on the ground right now, bleeding to death from stab wounds, all because you didn't open the door!”

We savored the thought.

Monsignor moved toward the center of the room, having discharged his pent-up emotions and calming visibly. He was apparently satisfied that he had taken the opportunity to teach us an important life lesson. Evidently we were not to encourage knife-wielding maniacs to stalk our pastor or to abet their pursuit of him. I was still too young at the time to consider the possible nature of the demons that might be in pursuit of Monsignor. Our unhappy pastor languished in our tiny parish, his heavenly reach clearly exceeding his earthly grasp. He lived in a kind of purgatory.

He scanned the class in a leisurely fashion, taking in his pedagogical domain. One of his tentative smiles flitted across his lips. Pleasant expressions never lingered long, knowing where they were unwelcome, but Monsignor had made his shift into his avuncular mood. It was his best effort to embody the concept that “the principal is your pal” (as if the statement were something more than a simple spelling mnemonic).

“So what have you been learning today? What has Mrs. Roe taught you?”

It was an impossible question. There were four grades in one room. Our teacher circulated among us, priming each group with a lesson and then leaving us to scribble in our workbooks while moving on to the next. She was in constant motion, trying to keep us all occupied in much the same way that a juggler tries to keep all the balls in the air. We all had different answers for Monsignor, which was the same as having none. We all remained silent.

Monsignor's brow clouded as the silence lengthened. We were in danger of losing his relatively benevolent mood. I raised my hand. (One did not blurt out answers in Catholic school.) His eye lit upon me and his smile flickered back into unsteady existence like a guttering flame.

“Yes, Zenobius, can you tell me what you've been learning today?”

I don't know about other Catholic schools, but in ours there were no diminutives or nicknames. We had no Bills or Bobs or Kates, only Williams and Roberts and Catherines. And you had to have a saint's name, which Monsignor would insist on using. (Sorry, Courtney and Madison. No room for you at the inn.) Monsignor would not dream of calling me “Zee” if he could dredge up a suitable saint's name.

I stood up at my desk. You don't remain seated while addressing Monsignor.

“Yes, Monsignor. We were learning about the Bible.”

The priest smiled down at me. I was already one of his favorites, the little kiss-ass smarty-pants who was reading well above grade level and could spout the memorized Latin responses at mass like a seminarian. No doubt I was already marked down as a potential vocational recruit. My classmates were undoubtedly relieved that I had forestalled Monsignor's potential wrath, but it was equally certain that I was not their hero. It would be advisable for me to watch my back during recess.

“Very good, Zenobius. Very good. And could you recite the names of the books of the Bible for me?”

The school uniform for boys mandated salt-and-pepper corduroy pants for everyday wear. They had the significant advantage of concealing whether or not you had wet your pants. At that moment, I was suddenly on the verge of benefiting from that feature. It wasn't possible that Monsignor seriously expected me to know that. Genesis was the first one, but what came after? I was completely blank and completely horrified that Monsignor would put me on the spot like that. What cruel game was he playing?

It was a game, but I didn't know the rules. More to the point, Monsignor was playing the starring role in a movie that he had scripted in his head, but the supporting cast hadn't seen the script and we often failed to respond appropriately to our cues. It was one of the reasons that Monsignor's life was a series of disappointments, both minor and major. I was about to be another minor one.

A look of mystifying disappointment crossed his face. How could he be surprised? I was utterly perplexed. No kid my age could be expected to remember all seventy-three books.

“The list begins with Genesis, Exodus, Leviticus, Numbers, and Deuteronomy,” he patiently told me.

“And then you say, ‘Please move over, Monsignor.’”

My confusion increased; but then, suiting his actions to his words, Monsignor stepped aside and I saw the names of the books of the Bible written on the chalkboard, right where Mrs. Roe had written them earlier in the week. The penny finally dropped. Or, more to the point, I glimpsed the page of Monsignor's mental script that included my cues. He had projected upon me his own sly cleverness and had composed a little comedy sketch in which I had failed to play my part. No doubt his disappointment in me was keen. I had not risen to the opportunity and had, in fact, completely forgotten what was on the board behind him. No doubt he had even positioned himself to block my view of it, setting up the entire scenario, but I insisted on missing my marks and my cues.

But he had already retreated into his cynical mode, probably berating himself for having expected anything from anybody, and waved his hand dismissively to indicate that I should sit back down. Monsignor looked around for our teacher, nodded his head at her, and then swept out of the classroom. I noticed that he exited by the front door. That made sense, especially since it was possible that a knife-wielding fanatic was lurking by the back door.
Posted by Zeno at 2:30 PM

I guess the good Monsignor never considered the possibility that there could a knife wielding psycho behind the door and to open it invited doom.

Not to mention the fact that he did not seem to think that he should sacrifice himself to protect the children behind the door.

I love to read your stories. I hope you are compiling them all to either publish or pass down to future generations.

Imagine no religion...I think to myself, what a wonderful world!