I beg your pardon?

Everyone is anticipating the swearing-in on Tuesday of Barack Obama as our 44th president. Three years ago, however, I considered the possibility that the person sworn in on January 20, 2009, would actually be our 45th. In speculating about the future, I hit some marks (Pelosi is speaker; Bush is hugely unpopular) and missed others (the Senate does not have a 50-50 split; the House did not aggressively investigate the Bush administration; Al Gore was not the Democratic candidate), but there are some things we may never know.

What if George Bush and Dick Cheney decided it would be good, as a precaution, to immunize themselves from criminal prosecution? You can read my original 2006 post for the entire scenario, but here are the key paragraphs: 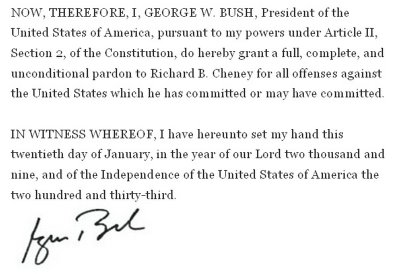 “It doesn't hurt to be safe, George,” said President Cheney. The former president's eyes widened at the use of his first name and he flinched as if struck. Bush opened his mouth as if to speak, then closed it again.

Think it couldn't happen? It all depends on Dick, doesn't it?
Posted by Zeno at 8:30 AM

So we know this isn't going to happen. One element of your scenario, the ongoing congressional investigations into administration corruption (somebodies have made a - pardon the term - killing in the Middle East, and that would be more bodies than the VP) - that element just never materialized.

And given Obama's intervention/non-intervention on Joe Lieberman, it seems unlikely that they are just waiting for Tuesday... those prosecutions are not coming...

But again, why not?

A frightening prospect... But one which is not entirely unbelievable. I don't think it will happen, but I can quite easily imagine that it could.

I have accidentally referred to BEPO as POTUS45. I'll blame you.

Bush is never gonna get prosecuted - in the US at least. Obama has all but said as much: I think Bush is a pretty cool guy, eh, makes decisions and doesn't afraid of anyting.

I'm too sickened to dig up the source.

In my fantasy, Obama issues orders for the arrest of Bush and Cheney from the inauguration platform. But I know this is fantasy.

In real life, though, I still hold out hope that something will happen -- not right away, but eventually. Maybe it will start with low-level officials making plea deals to rat out their superiors, and so on, until we finally get to the top.