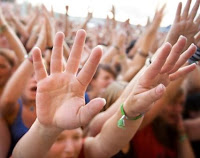 Pummeled on the periphery

Three years ago, my first substantive post on this blog was about a mind game. What would the world be like if you were the ultimate arbiter of public taste? If, for example, people were falling over themselves to emulate my preferences, all sports franchises and brewing companies would go suddenly bankrupt. (I know: mine is a cruel and cerebral world.) Republicans would almost cease to exist—except for those we put behind bars. (Come to think of it, that could be quite a few!)

I also noted that reality shows would be doomed if it were up to me, as would celebrities celebrated for their celebrity:

Thus I am chagrined beyond measure that my most popular post in recent months was a quick toss-off on August 6 concerning Hilton's clever exploitation of John McCain's ill-considered “celebrity” political spot. People flocked to Halfway There to check it out. Most of the hits came by referral from Pharyngula, of course, because we all know how people who frequent science blogs are eager for items about vapid starlets. In one day I scored over 6700 hits. For a tiny blog like mine, that's spectacular.

And before long I had two dozen comments, my favorites being the humor-impaired admonitions not to take Paris's energy policy too seriously. Apparently I need to sharpen my HTML skills so that I can embed flashing text (joke alert!) to warn incautious readers that dead-pan humor is being committed. Or maybe not. Perhaps nothing would have stopped the people at John McCain's campaign headquarters from quickly trotting out a statement that Paris was actually endorsing their candidate's position on energy. What a good way to establish credibility: claiming Paris Hilton's support! I turned my attention to more serious matters and promptly reaped the rewards thereof. On August 7, Mike's Blog Round Up at Crooks and Liars linked to my piece on volatility in polling. It was a nice post (with a helpful accompanying graphic) that I took some pride in. There were over a thousand hits on that day—but most of them were still for the Hilton post. And consider that the Paris Hilton video was available in a huge number of venues. My big numbers represented only the tiniest fraction—a microscopic spill-over—of the Hilton-related activity on the tubes of the Interwebs.

It appears that I may be out of step with the prevailing Zeitgeist.

Please, leave us some good local microbreweries! The big guys, you can have and welcome....

I will consider having a modicum of mercy for my friends, many of whom would be terribly bereft without their brew. For my own part, however, I have never developed a taste for any form of alcoholic beverage. I naturally impute this to my high innate moral standards (which is more edifying than simply blaming my taste buds).

…humor-impaired admonitions not to take Paris's energy policy too seriously

Yeah well, one never knows what will end up as serious politics, better be proactive…

I didn't develop a taste for alcohol until after I'd had my cholecystectomy. Have you been screened for gallstones, Zeno? :)

You don't exactly fit the profile (middle-aged overweight woman with kids), but then again, aside from being female, neither did I...

In my personal world, that car with the Michigan tags parked down the street, the one with all the anti-"Hillary" stickers on it ("DEFEAT HILLARY" "DON'T LET HILLARY PICK YOUR DOCTOR" etc.) and the two magnetic ribbons would be a Prius with a Darwin fish and a Dead Kennedys logo...