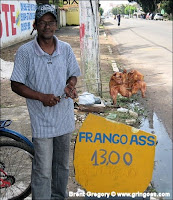 Get your frango while it's hot!

A fellow writer of sophisticated tastes and refined sensibilities sought my assistance recently with a vocabulary problem. His curiosity had been piqued and he knew I was just the person to alleviate his confusion:

Zeno, could you use your knowledge of the Portuguese tongue to explain this here pitcher? My mind reels with possibilities.

Is it true that flesh from the ass of the Brazilian frango tastes just like chicken?

Or could it be that “frango” is the first-person singular form of the verb “franger,” which translates roughly as “to frandge”?

It's a surprisingly good guess by my erudite friend, but—alas!—not quite on the mark. I hastened to set him right:

Well, we're on dangerous territory here! Literally speaking, frango is chicken. It's likely that ass in this context is an abbreviation for assado, which means roasted or baked. In other words (namely, English words), the vendor is advertising roasted chicken.

Then, of course, there are the slang possibilities. First of all (and most tamely), frango means a mistake, blunder, or cock-up. (I include the last one advisedly because frango is often translated as cockerel, an iconic symbol of Portuguese legend. The more common term, however, is galo, meaning rooster.)

More scandalous, however, is the usage of frango assado to indicate the position of the passive partner in the act of anal sex, which usage comes to us with the assurance of The Alternative Portuguese Dictionary. I'll have to take their word for it, since I've never heard the phrase used in that sense in my family circle. (Or if I did, I had no idea that that's what anyone was talking about.) This suggests the possibility that the vendor in the photo was not selling chicken ass, but this is a good place at which to end this discourse. Especially since you now know more than you could ever have wanted to know about frango assado.

My correspondent had sent his inquiry with copies to several other friends and acquaintances in the hopes of ensuring an enlightening answer. I, however, discreetly sent my reply only to him. When the other e-mail recipients began to pepper him with responses of varying degrees of seriousness, he decided to forward my response to everyone.

I didn't notice that Senhor Zeno replied without cc'ing everyone else.

This is NOT required reading, and while it is certainly informative and answers the original question, it may come under the heading of too much information—or as they say in England, “Too many data.”

Or, as they say in Portuguese:

In Dutch, Cinderella is known as Assepoester. Say it out loud, perhaps you will laugh as long and as loud as I have been doing for the past seven years.

My mother has several roosters rather like the ones in your picture, and despite the fact that we're collectively as Portuguese as haggis and tartan woolens, I think they're really way cool. I may start collecting them myself if I ever see any again.

I read Portuguese pretty well, but don't speak it; that's largely because I speak French and Spanish. I did do well enough to tell a friend of mine from Rio in IRC that the answer to "Are you going to the beach im biquino?" was "nao!", though. :)