From Georgia with love

The girl from Uncle Sam

“Your excellency, the emissary from the United States is here.”

The aide vanished from the office door and reappeared a few seconds later escorting a middle-aged blonde woman. No one else accompanied her.

“Your excellency, may I present Mrs. Cynthia McCain?”

President Saakashvili arose from behind his desk and strode toward his visitor, hand extended. “Welcome to Georgia, Mrs. McCain. It is a pleasure to see you again.” As he shook hands with his visitor, he looked meaningfully at his aide, who nodded slightly in acknowledgment and quietly slipped out of the office.

“It's a pleasure to see you, Mr. President. I wish the circumstances were happier.”

“Indeed. No one wishes that more than I do.”

Saakashvili led his guest toward a pair of comfortably overstuffed chairs and motioned her to sit down. A carafe of mineral water sat on a side table. He poured the water into a pair of goblets and placed one conveniently at his guest's elbow. He took the other, sat down, and took a slow sip as he regarded his guest.

“I presume the senator has a message for me, no? We can speak frankly here.”

Mrs. McCain paused for a moment to pick up her goblet. Saakashvili waited with a stolid patience while she sampled the mineral water. Finally she spoke.

“John wants you to know that he is deeply dismayed by the recent developments between Georgia and Russia. He strongly supports Georgia's territorial integrity and that will be his official policy when he is president of the United States.”

Saakashvili stared unblinkingly at her until she took a suddenly renewed interest in her water goblet and looked down at it.

“This message is rather ... disappointing. I express myself diplomatically. In fact, it's not a message at all. It is merely a restatement of what the news media report every day. Why does the senator send his wife to me if she has nothing to say?”

“I'm here on a humanitarian mission, Mr. President. It's not a cover story. I'm really here with humanitarian aid.” 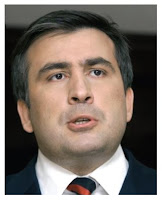 “I thank you for the humanitarian aid, but you are also here to accrue political benefit to your spouse. It is not purely a humanitarian mission. We all know this and it is—shall we say?—impolite to pretend otherwise. We are not talking in front of the cameras here. Tell me plainly, Mrs. McCain. Why do I not hear from the senator directly? And why do I no longer hear from Mr. Scheunemann? They couldn't talk to me enough before the recent unpleasantness and now it has gotten discouragingly quiet. The senator used to say he was my friend.”

“He is your friend, but it's a very busy time for John, Mr. President. There are many demands on him and the convention is approaching. He is over-subscribed, quite frankly, and I'm sorry he can't devote more time to the difficulties in your country. And Randy, you know, is John's chief foreign policy advisor and can no longer be active as a lobbyist. I'm sure, though, that his business partners are still eager to work as your representatives in D.C.”

“You Americans have many interesting idioms in your language. Is this called ‘left hanging out to dry’ or would a better choice be ‘twisting slowly in the wind’?”

Saakashvili set his goblet down on the table with enough force to make a loud noise, startling his guest. “You should not speak to me of fairness. I took on faith your husband's assurances that the United States knew Russia would not risk international condemnation for an invasion of Georgian territory. He and Mr. Scheunemann declared that they had political intelligence on the highest level that American pressure would prevent Russian retaliation if I ousted their so-called peacekeepers from South Ossetia. It seems perhaps that the senator's advice was wrong. The Russian reaction was massive and many Georgians died. Now Russia pretends to withdraw her troops while staying in place. She has announced to the world her recognition of South Ossetia as an independent nation carved from the center of Georgia. I was told this could not, would not happen. Perhaps I was not told the truth. It appears that I was not. In fact, I might say that I was lied to.”

“Oh, no, Mr. President! The senator would never have done that!”

“Perhaps you speak the truth. Perhaps your husband spoke in ignorance. Perhaps Mr. Scheunemann and the White House decided it would be advantageous to generate an international crisis so as to benefit their candidate. Do people in your country still think that your political party has any standing in the international community? That is puzzling, but apparently your campaign people think so. And perhaps they worked these matters out on their own. This gives your husband—how you say?—deniability. Perhaps he knew nothing.”

“I assure you, Mr. President, that John is entirely sincere in his declarations of support for your country and would never be a party to cynical political manipulation of an ally. We are friends of Georgia and next year when the senator becomes president, we will prove that to you!”

“I beg your pardon, Mrs. McCain, but if your predictions are as accurate as your husband's, then next year your husband will still be a senator. If you'll excuse me, I must attend to other appointments now. Thank you for your humanitarian aid and I hope you have a pleasant time visiting our country. It's smaller now, but not easier to travel in.”
Posted by Zeno at 10:30 PM

Well done. I thought for a moment there you were going to write something about McSame's wife being sent to the US state of Georgia. Where, by the way, she should go as one of the school districts near Atlanta lost their accreditation today, the first time that's happened anywhere in the US in the last forty years. I guess all of the students got "left behind."

But - we really, really do not need to get involved in the Georgia conflict. The US and Russia together retain 9600 deliverable nuclear weapons - most of which continued to be pointed at each other (and America kept an indecently large portion ready to launch quickly) after the 'end of the Cold War'. Furthermore - Russia has been awfully pointed in its reminders that American attempts to put bases all over South Asia are considered threatening. Finally - Russia has repeatedly stated that if America uses precision bombing against Russia or its allies, they will use tactical nukes. Realistically, what can the US reasonablly do except (a) let Georgia twist in the wind, or (b) encourage Georgia to engage in conciliatory talks with Russia.

I can see no justification for continuing the game of Asian brinkmanship Bush engaged in. Fuck the Georgian oil pipeline.

You are correct, Llewelly. There's no substantial action we can take on Georgia's behalf and it's highly questionable that our interests would be served in attempting to do so anyway.

I hope you don't think I implied we should.