The preachers are revolting

Politics from the pulpit

California's arid Central Valley is awash in religious right-wing radio. During trips down to visit the family farm, I sometimes wander the AM band, marveling at the alternative universe into which I've fallen. (No wonder so much of my family is steeped in this conservative cant.) Earlier this month I stumbled across the mundanely named Issues in Education. The hosts are Bob and Geri Boyd, a fervent Christian couple whose guest was fiction writer David Barton.

Barton would disagree with that description, of course. He fancies himself a historian, working diligently to restore the supposed truth of America's profoundly Christian origins. (Ben Franklin and Thomas Jefferson would be so surprised.) The Boyds announced that the title of the program was Vital Election Issues, part 2. (You can find it—and the expected part 1—on the Program Log page of their website.)

Barton's awkward relationship with historical truth is well illustrated by his comments concerning recent events. At 3:22 into the program, he exposes a shocking truth about Judge Jones and the Kitzmiller case:

If you look at the case we had, the Dover case in Pennsylvania, in that case where we're just looking at can you mention intelligent [design]—can you even mention the phrase?—the judge there overwhelmingly came back and said how dare you try to say what's in the Declaration of Independence! And what was brought out was that his judgment from the court was almost verbatim the brief filed by the ACLU. He didn't even get around to writing his own opinion. He just took their brief and posted it as his opinion.

These remarks expose Barton as a fool or a propagandist. Perhaps both. Of course the Kitzmiller decision reflects the arguments of the winning side! The contenders file their briefs, offer their arguments, and the judge makes his ruling—which will agree with the side who he thinks had the better of the debate. The briefs are proffered as potential draft decisions, from which the judge may freely draw, as Jones did with his findings of fact. Duh!

But Barton wanted to talk about the future, too. Some brave Christian pastors are girding their loins for political battle. Having devoted most of their time to render to God the things that are God's, this year they want to get into Caesar's domain. In his peculiar diction, Barton excitedly reports on this development (at 7:34 into the program):

[T]here is a day stood up in September where you're going to have thousands of pastors stand up across America and preach a sermon that is considered political, including on candidates, out of the pulpit and they're challenging the IRS to come after them. 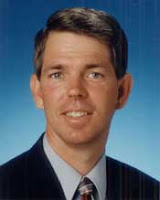 The reason is they have prepared a lawsuit and they are convinced—the Alliance Defense Fund has set this up—and they are convinced that they can easily strike down that code that was installed in 1954 telling churches what they can and cannot say out of the pulpit. So you literally have thousands of pastors who will stand up on that day and challenge the government to arrest them or take them to court or try to jerk their tax exemption. You're going to see this thing fought in courts and very likely you're going to see this prohibition against churches speaking dumped, which is going to open up the market even more. So there's a lot of positive stuff going on right now.

I listened to the end of the program (without any apparent residual neurological damage, fortunately), but Barton did not spill the beans on the date when the nation's most right-wing pastors endorse J. Sidney McCain III. (Well, you didn't think they were going to endorse any Democrats, did you?) For this particular scoop, you need to check out the site of the Alliance Defense Fund. There you discover that this project is called The Pulpit Initiative and is scheduled for September 28.

On Sunday, September 28, 2008, we are seeking pastors who will preach from the pulpit a sermon that addresses the candidates for government office in light of the truth of Scripture. The sermon is intended to challenge the Internal Revenue Code’s restrictions by specifically opposing candidates for office that do not align themselves and their positions with the Scriptural truth. By standing together and speaking with one voice, it is our hope to recapture the rightful place of pastors and churches in American life.

The Alliance Defense Fund offers an executive summary that points out the sterling record of America's churches in their political involvement before 1954:

Historically, churches had frequently and fervently spoken for and against candidates for government office. Such sermons date from the founding of America, including sermons against Thomas Jefferson for being a deist; sermons opposing William Howard Taft as a Unitarian; and sermons opposing Al Smith in the 1928 presidential election. Churches have also been at the forefront of most of the significant societal and governmental changes in our history including ending segregation and child labor and advancing civil rights.

Good argument! The nation would never have recovered if Al Smith, a Catholic, had been elected president in 1928. (Too bad about that Kennedy guy in 1960.) And it's true that some churches fought against slavery—just as many others defended it.

In four weeks The Pulpit Initiative will come to its exciting climax as pastors explain how God wants Christians to vote against Barack Obama, public education, abortion rights, and same-sex marriage. And will they still have their tax exemptions next year? I pray not.
Posted by Zeno at 8:00 PM

Oh, man. I hope the IRS goes after every one of them. Maybe we can make a hole in the deficit.

ps - I'm also fond of the "we used to do it" argument - slavery and women having no rights and the rest of the good old days.

Thank you for posting this. In light of Dominionist connections high up in the Republican party, it's ominous at least.

"Revolting" - that sums it up nicely.

So does Free Speach automatically confer tax exemption? I'dn't mind some of that?

Taft was a Unitarian? Damn, now I like him even more. Anyone for a zombiefication?

If McCain is elected, I expect the churches will retain their tax exempt status despite their partisan endorsement of a candidate.

I guess they think so. Let's hope they don't go anywhere near Slashdot: the "free-as-in-speech vs. free-as-in-beer" discussions would make their heads explode.

I have a nasty suspicion the IRS will not move against any of these pastors.

As a free speech advocate, I believe that it is time to all drop speech restrictions on whatever any church wants to say about any political issue or any candidate. If a church leader wants to condemn members of the congregation to eternal agony and damnation for supporting the wrong political position or candidate that is just fine. It is also time to eliminate non-profit status for all organizations, regardless of their social mission. As we all know, the national debt is way out of control and that will not change any time soon. The U.S. treasury desperately needs revenue. On top of that, some non-profit organizations and churches advocate for political and social positions that are profoundly offensive to me. Given that, I do not want to support or subsidize their anti-American agendas with one penny of my taxes. In other words, if churches or anyone else wants to play politics, then pay just like the rest of us. That is only fair and reasonable, isn’t it? Of course it is. It is Tea Party time!