An order of freude, please 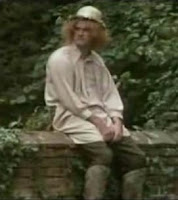 I wonder if it's the inbreeding. That could explain my cousin.

And maybe not just my cousin.

My father and his siblings all faithfully married fellow Portuguese of Azorean descent. Keeping it in the family, so to speak. Those islands in the Atlantic aren't very big, you know. And our family's forebears all come from the same island, too. It's a good way to ensure that you marry your nth cousin, even if he or she is m times removed. Oy.

In some cases, I suppose it's possible that our good qualities are reinforced. For example, my siblings and I are all reasonably intelligent and successful adults. Mom and Dad must not have dangerously matching recessives. In other cases, well, it's not pretty.

Consider my uncle and aunt. If you take the dumbest son from one family and breed him with the dumbest daughter from another family, you shouldn't be surprised at negative outcomes. All their kids are dumb as posts. My uncle and aunt are a cautionary lesson for anyone with the wit to notice (which would not include any of their children).

So: my cousin. The pick of the litter. He's a couple of years older than me and has been a jerk all his life. My earliest memories of “Alex” are the insults. He was good at them. It came from constant practice. When he was in fourth grade at the Catholic school we both attended, Alex decided the mass response “Peace be to you” was more interesting if rendered as “Piss be on you.” For weeks it was his favorite greeting (until Monsignor persuaded him to abandon it—at least at school).

Of course, he was in fourth grade. Fourth grade boys are often like that. And they usually outgrow it. Alex, however, did not. He had found his groove and he refused to leave it. Alex's sibs and cousins endured an unremitting stream of casual abuse from him. To make matters even more delightful for everyone, Alex liked to remind people that he was superior to us. A perfect person. Brilliant, too.

I didn't like him much. And I dared to doubt he was as smart as he claimed to be.

This summer Mom passed along the latest word on Alex. The poor bastard just lost his most recent job. A job as a custodian. A part-time custodian. A part-time church custodian whose major compensation came in the form of free parochial school tuition for his children. His long-suffering wife is the principal provider for the family. I'm sure “Beth” didn't see this coming when she married a young man who was then a partner in a family dairy farm. Perhaps she had gotten off the boat from the Azores too recently. And, of course, that was before the first bankruptcy.

Alex has had two. The first bankruptcy was in partnership with his father (my Dad's dim brother). The second he managed on his own. It's a hilarious story.

The family dairy farm fell apart under my uncle's stewardship after my grandfather's death. The bankruptcy auction settled the outstanding debts with a little left over. Alex took his cut and started a small dairy of his own. He decided after a few years to leave for greener pastures. Most of us thought Alex just wanted to get away from the other family members. No one seemed to mind that he was leaving, however.

Then the fun began.

Do you know cows? Cows are stupid, nervous animals. If you replace a post in their corral, they'll gather around and stare at it, snorting with flared nostrils and shifting their hooves anxiously. Eek! A new post! They thrive on routine and twice-a-day milkings. Don't mess with the routine.

Alex messed with the routine.

When he decided to leave the family neighborhood, Alex didn't fool around. He left for Oregon. He'd be several hundred miles away.

Alex found a place to rent in Oregon, hired some cattle trucks, and hauled his cows north. At least until he hit the state line. That's where the ag inspectors stopped him.

You need papers to move livestock across state lines. Alex neglected to get them in advance. My brilliant, perfect cousin is a moron. His cattle trucks ended up on a siding off Interstate 5. The cows had to be unloaded and milked by hand, all the milk going to waste. After a 36-hour delay, he was on his way again.

But Alex's cows went dry. Dairy cows “go dry”—stop lactating—when they are not milked regularly or are subject to stress. Alex had subjected his dairy cattle to both. He had no milk to sell until his cows were inseminated and came to term with a new crop of calves. By then he was deep in the hole he had dug for himself. His dairy limped along for a couple of years before he was forced to fold his tent and steal quietly back down to California.

He tried working as a mechanic, but that didn't last very long. Finally the local parish priest took pity on him and offered Alex the job of church custodian. While Beth worked long hours at Wal-Mart, Alex puttered about the church grounds. He even grew a scruffy beard to fit better into the role of Groundskeeper Willie.

According to Mom, a new priest took over the parish and discovered that the custodian was rude, mouthy, and uncouth. Alex was dismissed.

I feel sorry for Beth, of course, but I can't seem to tap any sympathy for Alex.

No. Cows are the most devious creatures alive.

The second they find a way to operate machinery - be it with opposable thumbs or telepathic enslavement of thumbophores - we're doomed. Doomed! I tell you!

Perhaps the Holsteins on the family dairy were devious enough to pretend to be utterly stupid and skittish critters for the entire time I knew them. Or maybe they really were just dumb. They would eat themselves to death if permitted. Tiny animals they could squash with one hoof would throw them into total panic. Holsteins are sweet and prodigiously productive ninnies.

I suspect, Sili, you were acquainted with some sneaky Guernseys. They are not to be trusted!

I get damn sick and tired of you smartass elitists making fun of us regular people. You seem to forget that you need a lot of us double-digit IQ folks to balance all you triple-digiters.

AND: McCain-Palin will be elected and will be the first president and vice president proven not only to both have double-digit IQ's, but also to have IQ's that when combined still total in the double digits.

You may regard me as duly chastened, Plumas, by your erudite reproach.

(And please let me know if you need me to explain any of the words I used (or how parentheses are supposed to work)!)

Cows make horses look like geniuses, though. (Let me hasten to add that I love horses, and have even owned some in my time. But smart they aren't.)