Obama is building the base 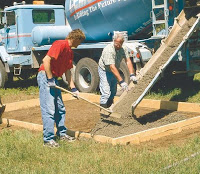 The foundation firms us

Although I know better than to take polls too seriously, I'm as curious as any political junkie about the state of the presidential race. As a devoted Democrat, I smile when Obama opens up a solid lead and I cringe whenever it narrows—even though I know what the polls say today is not necessarily what the ballots will say in November. Still, competent pollsters know how to take a snapshot of voter sentiment and give us a sense of how things might be shaping up.

That's why I watch the numbers over at electoral-vote.com, where the Votemaster tracks several polls and aggregates the results. (I've even installed its vote-tally widget in my sidebar; just look to the right.) I wonder whether people have noticed an interesting trend in the numbers. The Votemaster provides a number of graphs to illustrate how the results have varied with time. The graph depicting the electoral vote for each candidate shows how McCain appears to have closed the gap with Obama and turned the presidential contest into a neck-and-neck horse race. This is enough to curdle the blood of any partisan Democrat, although it's certainly too early to panic:

But the Votemaster also provides a graph of “solid” electoral votes. He notes that “The electoral votes of a state only count in this graph if the candidate has a margin of 5% or more over his opponent.” The story in the “solid” graph is quite different. While the first graph showed how the gap has closed in terms of total electoral votes, including the closely fought states, the second graph demonstrates that it has widened in terms of the solid states. Obama has been grinding away at building a strong base—a “solid” foundation—of states where his margin over McCain is at least five percentage points. While a five-point margin isn't entirely beyond the typical pollster's error bounds, it's an extremely good bet. With minor variations, Obama's base of solid states has been growing steadily, until it now approaches the magic number of 270.

By contrast, McCain's tally of solid states has been very slowly eroding. This implies that his recent apparent success in closing the gap with his rival is based entirely on tiny margins in swing states. He must essentially run the table to prevent Obama from snagging the one or two marginal states needed for a Democratic victory. Any one of the states of Florida, Ohio, North Carolina, or Virginia would put it away for Obama. Colorado plus one of the Dakotas or Montana would also suffice.

Perhaps McCain should ask Cindy if she remembers where their homes are. She may need to buy houses in all of the swing states to give her husband that home-base advantage. He's going to need it.
Posted by Zeno at 9:30 AM

Here's the electoral map I've been looking at. If McCain taps Romney as VP, it seems like Michigan will be the battle ground state. I don't think Obama is going to be able to nab Florida or Ohio. He can still win as long as he holds onto Michigan.

That assumes, Jeff, that Romney is actually a benefit to the McCain campaign in the state where his father used to be governor. Will a state hit hard with recession be able to appreciate a pair of Republican multi-millionaires? Besides, Mitt Romney left Michigan to go to Massachusetts. Do people in Michigan think it's okay that he abandoned them?

Rather than looking directly at polling results, prediction markets may be a (pardon the pun) better bet. As I write this, shares in "Barack Obama to win 2008 US Presidential Election" on the Intrade market (conveniently based in Ireland where U.S. laws against "gambling" don't apply) are trading at 61.5. This can be interpreted to mean that the probability estimated by the market that Obama will be elected president is 61.5%.

Prediction markets are a clever way of automatically synthesizing multiple sources of information. Raw polling figures are obviously very important, but so are a number of other factors. Anyone care to speculate on what those might be? I have some ideas, but I'm just guessing. And that's what's odd about prediction markets: their predictions can be quite good even though nobody can necessarily identify what information they are using.

(For some other notes on prediction markets and the miraculous powers of Al Gore, check out my post from March.)

Zeno -- you are likely already aware of this, but as a factual tidbit for your readers, let me point out that the Votemaster is none other than Andrew Tanenbaum, author of Minix. Why is this important? Well, it's not, really, but it is worth knowing that ast has shown himself to be a mensch when it matters, refusing to allow his famous technical dispute with Linus Torvalds to be used as a brush to tar Torvalds' reputation. Tanenbaum's reputation for honesty and largeness of spirit is one reason I tend to trust the numbers at electoral-vote.com. I get no subsidy from electoral-vote.com, by the way -- just think dude deserves some props, is all.

Would McCain/Romney be the richest ticket ever?

I'm enjoying the Democratic convention right now, but although it's on every channel, only C-SPAN seems to have decent coverage -- everyone else thinks you'd rather hear their own talking heads.