A grade goeth before a fall 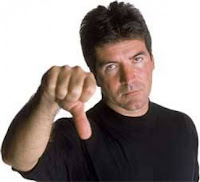 And it's all my fault

While I doubt it registers with my students, I am at pains every semester to explain to them that they earn grades. I do not merely give them. Unfortunately, the students who most need to hear this message seem to be the least likely to retain it.

I recently taught an algebra class in an accelerated format. Students were warned at the outset of the course's brisk pace and the need to work diligently to stay abreast. The faint-hearted quickly folded their tents and stole away. The braver students stuck it out to the end—a bitter end for a few of them. Overall, though, the success rate was over 80 percent. I was happy that so many of my students passed the class.

One of the students was less than enamored with her “success.” Yes, she passed the class, but she passed it with only a C after having spent most of the semester at the B level. She had spectacularly flunked the comprehensive final (earning fewer than half the possible points on it) and her average plummeted. I declined to award a B to a student who couldn't even earn a D on the final exam. She called me up to complain at the injustice of the result.

Her particular complaint focused on what she perceived as the inequity of students getting a C grade with composite semester scores of 68.5 while she was being denied a B despite a composite score of 78.5. Why did I “round up” the scores near the C-D boundary but not hers at the B-C boundary?

Several factors influenced my decision. First of all, the C-D boundary is basically academic life versus death. A grade of D forces you to repeat the course for credit. I give very close scrutiny to the scores of all students teetering on the precipice of the C-D divide. Furthermore, the three students in question had all beaten my complainant by several points on the final (and the weakest of the three was in the enviable “hammock” position). Unlike my former B student, they had not used the final exam to demonstrate utter confusion and lack of subject-matter retention (a consideration of some significance in a prerequisite course like algebra).

Then, of course, there's the other tiny factor: Among the students with passing grades, the student in question had one of the lowest participation rates in the quizzes that I used throughout the semester to gauge my students' progress. To be fair, it was not chronic absences that caused her to miss so many quizzes (although her attendance did suffer near the end of the semester). No, it was her refusal to submit her paper to me when I collected them, even when I made a point of asking her directly. “No,” she'd say. “It's no good.” Brimming over with sweet reason, I would explain, “Five points on a ten-point quiz may be a little embarrassing, but five points in the grade book is significantly better than zero points!” She'd shove the crumpled quiz into her binder and resolutely refuse: “No, I don't want you to look at it. It's no good.”

In the end, she withheld or missed over twenty percent of her quizzes. A series of truly bad decisions. Those points were not there to reinforce her against a bad result on the final exam, which turned out to be a significant matter in the end. I guess her problems weren't just in algebra.
Posted by Zeno at 5:00 PM

My wife had to <strike>give out</strike> assign grades in a physics class this week where two separate student, otherwise getting A's on all the tests, failed to turn in a stitch of homework or labs. Ah, the <stike>fun</strike> ulcer-inducing agony of puting a C in the gradesheet. I'm not sure how much physics they learned in her class (over what they might of come in with from HS), but hopefully they learned something.

The "s" (strikethrough) tad is not allowed? Bag, what kind of joint is this?

Ah, that was painful (as well as typo/auto-"correct"full) from a phone ...

Is "bag" an interjection now? I didn't know.

Yeah, Blogger limits the HTML tags pretty severely. Not sure why. Use "Preview" to find out if your code is accepted.

I question the wisdom of assigning even a D to any student who still doesn't grasp that, in applied mathematics, 0<5 ;-)

I get your point, Kathie. However, I'm sure you know (as indicated by the emoticon) that my student's personal calculus of self-validation indicated (to her, at least) that it was worth the loss of a few points if it spared her from the embarrassment of letting the teacher see her inadequate work. Foolishness, I know. Also, in retrospect, clearly a significant miscalculation. And now she's miffed that I decline to ameliorate her lack.

Nah, for "tad" read "tag" and for "bag" read "bah". The latter is definitely an auto-"correction" I-the-device-am-so-much-smarter-than-you issue. The former might be, or it might be my dyslexia (letters b, p, d, and q -- all a circle and a stem -- how do they work).

Blogger doesn't silently eat tags it doesn't like; it refuses to post until you correct what offends it so. Of corse that wasn't so easy on my device as it didn't show the whole message in the limited window and wouldn't scroll around properly. Ended up deleting some and retyping it.

"...the embarrassment of letting the teacher see her inadequate work..."

Gosh, I sure hope she never needs a Pap test or mammogram (or even has to pass through TSA at an airport).

You who are teachers, what's your opinion on the "give lots of tests and drop the worst grade" scheme and its variations? As a student, I've had it save my behind a couple of times when I was taking a test on a really bad day.

(OTOH, I've occasionally forgotten that there would be a test, and was caught up enough on the material that the tests turned out fine. Go figure.)

Karen, I recall that one of my university professors was adamantly against it: "Discarding data is immoral!"

For my own part, I drop the lowest exam score in classes where there are at least four exams during the semester (not counting the final). It has benefits for both the student and the professor. The student benefit is obvious. The advantage to the professor is the reduction of hassles with students. When student anxiety is lessened because "you get one screw-up for free," the instructor has many fewer conversations with hand-wringing students.

Of course, a statistician might advise me to drop both the lowest and the highest scores as being outliers, but I don't think students would go for that.