Victoria Jackson is not crazy 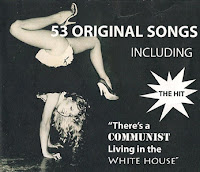 Not when you grade her on the (extreme) right curve

Depending on your scale of measurement, your conclusions can vary dramatically. For example, suppose you're trying to evaluate the sanity of Victoria Jackson, the Saturday Night Live alumna who has found a new life—if not happiness—as a right-wing pundit. Do you measure her against an absolute scale or a relative one? She comes out a lot better if you gauge her against the fringe-centered standards of Free Republic.

Recently Jackson announced that the Islamic group known as the Muslim Brotherhood has infiltrated “the highest levels” of government in Washington, D.C., including the White House! When Jackson's claim was posted at Free Republic, the first commenter said, ”I'm inclined to agree with her.”

A dissenter weighed in with a cautionary note: “Umm, don't we usually dismiss the pronunciamentos from Hollywood airheads out of hand?”

He was promptly denounced for his use of a foreign word.

Another Freeper chivalrously leaped to Jackson's defense: “She played an airhead of SNL but she isn’t one in real life.”

Perhaps he has not seen her current act. The crazy seeps right out of the video.

And this is why grading on the curve is such a bad thing!