The cartoonist as clairvoyant 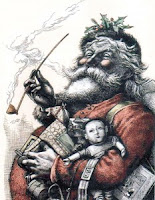 Did Thomas Nast see the future?

Being on the mailing list for the Catholic League ensures a never-ending stream of vitriol in one's in-box. As a tactless and belligerent curmudgeon, Bill Donohue is always ready to make a pugnacious spectacle of himself in the defense of Mother Church. His latest missive is titled “Bigot Nominated to NJ Hall of Fame.” Donohue is quite offended that editorial cartoonist Thomas Nast is about to be honored in Nast's residence state of New Jersey:


The New Jersey Hall of Fame (NJHF) includes luminaries as diverse as Albert Einstein and Shaquille O'Neal. It should not be dishonored by including bigots: Catholics will be outraged to learn that of the 50 nominees for the class of 2012, Thomas Nast made the cut. Nast is not only the most bigoted cartoonist in American history, the 19th-century artist consistently inflamed hatred against the Irish and Catholics alike.

Never at a loss for hyperbole, Donohue does not hesitate to declare that Nast is the most bigoted cartoonist in all of American history. One cannot help but be impressed by Donohue's relative innocence.

In his Catholic League screed, Donohue takes particular offense at Nast's attacks on the Roman church (that is, after all, Bill's job). Nast delighted in depicting Roman Catholic bishops as crocodiles, with their miters representing reptilian jaws. An example shows that Nast really was being a bit nasty: 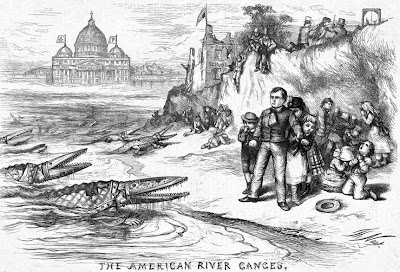 It was a theme to which the cartoonist returned whenever he wanted to inveigh against Romish influence (the Church was on record in opposition to the separation of church and state) or Irish immigration (Nast had decidedly nativist tendencies). Today we can look at Nast's cartoons and see them as over the top. In high dudgeon, however, Bill Donohue cannot help but demonstrate once again his unerring instinct for avoiding le mot juste in favor of the words least apt:


[H]e demonized bishops by portraying them as crocodiles with miters for jaws; and he also depicted them as emerging from slime while prowling towards children.

Really, Bill? You had to go there? Silly man.

You just depicted Thomas Nast as a prophet.
Posted by Zeno at 10:00 AM

No child's behind left.

Nice post- discovering you via PZ. If I may suggest a correction, it's "le mot juste".

Nast actually mellowed on occastion -- his 1869 "American Thanksgiving" shows Uncle Sam and Lady Liberty sharing their table with Chinese,Japanese, Mexicans, Spaniards, Native Americans, Swedes, Rich guys, ex-slaves, and Irishmen -- he even toned down the usual "make the Irishman look like an ape" imagery he so commonly used.

Donohue knows he'd be a target for Nast's pen. As Boss Tweed famously said of Nast, "Stop them damn pictures. I don't care what the papers write about me. My constituents can't read. But, damn it, they can see the pictures."

Donohue believes in eternal life. He fears Nast is out there, somewhere, making pictures that tell the truth, and that someone will actually "see the pictures."

So, as far as I can tell, Nast was shut out of the New Jersey Hall of Fame.

How will he ever recover?