Toons ahead of their time 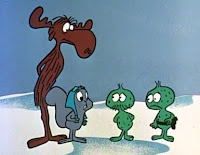 The longest running plot in the original Rocky & His Friends cartoon show was the 40-episode “Jet Fuel Formula” series, which involved a quest to find a mooseberry bush (to obtain the vital ingredient for rocket fuel). With the bush in hand, Rocky and his sidekick Bullwinkle face a dilemma. The moon men Gidney and Cloyd have helped the heroes obtain the mooseberries, which the lunar natives need to fuel their craft if they are ever to return home. Rocky and Bullwinkle, however, are agents of the U.S. government. The bush is supposed to go to Washington, D.C., and not to the moon men.

As the brains of the duo, it falls to Rocket J. Squirrel to come up with a clever plan: Since the U.S. government was itself planning to use the mooseberries to power a moon rocket, Gidney and Cloyd need only offer themselves as Americans willing to volunteer for the mission. A complication, however, arises in the form of Senator Fusmussen, chair of the Senate Citizenship Committee, who has introduced troublesome legislation:


Reporter: Just what does your new bill mean, Senator?
Sen. Fusmussen: Well, you see, right now it's entirely too easy to become an American. This bill's going to make it tougher.
Reporter: What do you mean, it's too easy?
Sen. Fusmussen: Well, all you got to do is be born here. This large loophole has got to be plugged up! Too many people are claiming to be Americans. Alaskans! Hawaiians! Californians! It's disgraceful!

What? Hawaiians and even Alaskans are claiming citizenship? Outrageous! Sen. Fusmussen's bill may already be too little, too late!

There is, inevitably, a happy ending. Gidney and Cloyd fail their citizenship exam and get deported—to the moon.

The conclusion of the “Jet Fuel Formula” epic was broadcast in 1960. Was it a prescient anticipation of today's absurdly hollow controversy over how one qualifies as a “natural-born citizen,” or simply an echo of previous instances of overwrought nativism? Perhaps it's both.

There was an enjoyable grace note to the happy return of Gidney and Cloyd to their homeland. Sen. Fusmussen, present at their deportation, accidentally gets launched with them. President Obama could take a lesson from this and should consider a renewed program of lunar missions. I have suggestions for some people we should shoot into space.

Orly? Your ticket is waiting.

Make a fire by rubbing two Boy Scouts together?
Hmmmm. More prophecies of the Important Issues for the 21st century.

Whats sad is, after so many years of literally insane Republican comments, I had no problem believing Sen. Fusmussen to be an actual serving Senator and those being actual statements.

Bravo! Rocky & Bullwinkle, hand-crafted into a well-written post. I even learned something. For the past 50+ years, I thought the moon men were Gidney and Floyd. Now I learn that it's Cloyd, not Floyd. Of course, back then, there was almost no place to find the names in writing. Your post adds further weight to the fact that the R & B show was certainly directed toward kids, but much of the wit-and-wry was written for the adults in the room.

Ironically enough, the Senator is clearly pointing at Baja California, which is indeed not part of the United States. Intentional, no doubt; TR&BS had plenty of subtle jokes hiding behind the obvious ones.

Yes, Tualha, I noticed that, too. I wonder if I caught it when I watched the original broadcasts back in 1960. I loved "Rocky & His Friends" from the very beginning.