The meanies justify their ends

Someone had been busy. Each car in the parking lot had its own copy of an anonymous flier. I pulled the document out from under the windshield wiper. Large letters said “A B C.” Upon closer inspection, the fine print delivered the message:


Abortion = Breast Cancer
The flier was a simple one-fold document, the interior of which went on to explain breathlessly that “post-abortive” women were at severe risk of breast cancer. A woman's body, you see, goes slightly crazy when frustrated in its divine mission to bear young and unfulfilled hormones wreak havoc in the mammaries. Hence the battle by “pro-life” forces against abortion is also a battle to save women from horrible and disfiguring disease—and even death.

It's science, people. You have to believe in science. (Except, of course, when those same crazy-ass scientists go on about evolution, global warming, or that nonsense about a billions-year-old earth.)

The so-called ABC connection between abortion and breast cancer is a favorite talking point of the anti-abortion activists. It is routinely cited on Catholic Radio and fliers like the one I found on my car keep insisting that the link is established beyond any reasonable doubt. They like to give numbers, too, such as “28 studies reveal increased risk.” The cherry-picked reports, however, include results deemed not significant (in the statistical sense) and no hint is given that the preponderance of the evidence goes in the opposite direction. As the National Cancer Institute puts it, in the affectless diction of a neutral science-based agency, initial research in the area was ambiguous, based on small sample sizes, and produced inconsistent results:


Since then, better-designed studies have been conducted. These newer studies examined large numbers of women, collected data before breast cancer was found, and gathered medical history information from medical records rather than simply from self-reports, thereby generating more reliable findings. The newer studies consistently showed no association between induced and spontaneous abortions and breast cancer risk.

That is the consensus of modern medical science, but the pro-lifers still cling to the handful of early studies that went their way.

I always find it irksome when some wrong-headed group tries to co-opt science in support of its non-scientific objective. Creation “science,” of course, is a prime example of the perversion of science in the service of sectarian interests. I have, however, a particular disdain for the sheer opportunism exhibited by people like the ABC proponents. Contrary to their supposedly deep-held principles, they are fully prepared to embrace the notion that the ends justify the means. It's a pragmatic utilitarianism that I suspect most of them would instantly disavow, but here's another place where the evidence goes against them.

For example, anti-abortionists emphasize that terminating a pregnancy is the killing of human life. Many of them are willing to call it murder and express the wish that health professionals who perform abortions be tried in courts of law under homicide statutes (and then, somewhat inconsistently, some anti-abortionists want them subjected to capital punishment after conviction). It is, therefore, a great moral crusade against a heinous crime that society at large has so far been blind enough to permit.

Doesn't it severely undermine the moralistic argument to append a health warning? “Oh, and don't forget that you'll get breast cancer if you do it!” The ABC issue is irrelevant to the faith-based moral argument. Its inclusion is nothing more than a concession to pragmatic realpolitik. Yet I never hear apologists on religious programs concede that point. They toss in the ABC argument as if it's equal in status to their abortion-is-murder claim. The disproportion should be dizzying to the conscious brain, but it appears that this does not bother most anti-abortionists. (In fact, not any that I've ever seen.)

Down on your knees! 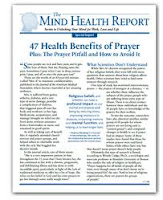 My recollection of the ABC flier was prompted by a recent e-mail that I discovered in my spam folder. The nice loons at Newsmax Health (as distinguished from the loons that infest all the rest of Newsmax) wanted me to be aware of the health benefits of prayer. No, not the long-discredited notion that intercessory prayers could speed one's healing. This message was about the benefits to oneself. Prayer, by golly, is good for you!
That's a pretty good teaser. I'm sure you're as excited as I was at the prospect of learning the answers to these weighty questions. A free video (28 boring monotone minutes) is available to tell you amazing facts:
Want the details? Newsmax Health will send you two free copies of its Mind Health Report! (And more, if you subscribe for only $36 for twelve monthly issues. You knew we'd get there eventually.)

Of course, this is science. (Remember “science”?) The founder of “neurotheology” is a real scientist (well, an M.D., anyway) at a real medical research center (well, an “integrative medicine” center, anyway). As a totally careful scientist and researcher (and stuff like that), the researcher began with a formal definition of the phenomenon being studied. Namely, what is prayer? I wasn't surprised by the research paper involving the rosary. That's pretty traditional and old school. But there's a much broader non-sectarian approach to what is called “prayer.” Here's the definition from the beginning (at 4:41) of the tedious video!


So, for the purposes of our research, we defined “praying” as any mental activity that includes


How's that for a tight focus? When you bundle it all up, it amounts to meditation of some kind. Period. (Even in a church or synagogue, which were specifically cited. But not, apparently, in a pagoda or mosque.) The results, of course, merely indicate that quiet contemplation is good for you. It says nothing about the efficacy of prayer qua prayer. Newsmax is trying to sucker its conventionally religious readers into ponying up some cash to wallow in “scientific” validation of their prayer practices. We should “pray” because it's good for us—not because it works in any conventional way as a nice chat with one's deity.

I know that I could dig out my credit card and send Newsmax Health some money right now for a subscription to what I'm sure would be a rich and reliable vein of unintentional humor. However, I really think I should pray about it first. Or, as I prefer to call it, a “nap.”

There's even a term for such studies, Zee, owing to their proliferation (not to be confused with pro-life):

I read Newberg's book some years ago -- started off well, then wandered off into woo. More recently, he was scheduled to speak at a CFI conference on the Scientific Study of Religion (along with several other more sensible people, Dan Dennett among them). My wife and I attended the conference, and were disappointed to find that Newberg had cancelled due to illness.

Perhaps he didn't pray/meditate/contemplate his navel/engage in other vaguely specified mental activity enough?

I should clarify the above: it might have made for some amusing fireworks to put Newberg up in front of a bunch of skeptical atheists. Depending on what he said, I might even had summoned up the courage to give him a hard time.

Doesn't it severely undermine the moralistic argument to append a health warning?

It's a lot like the way the Catholic Church in Africa appends the contra-factual health warning "condoms cause AIDS" to their "moral" argument that wearing condoms to protect your life and the life of your sexual partner(s) will cause you to burn in hell forever.